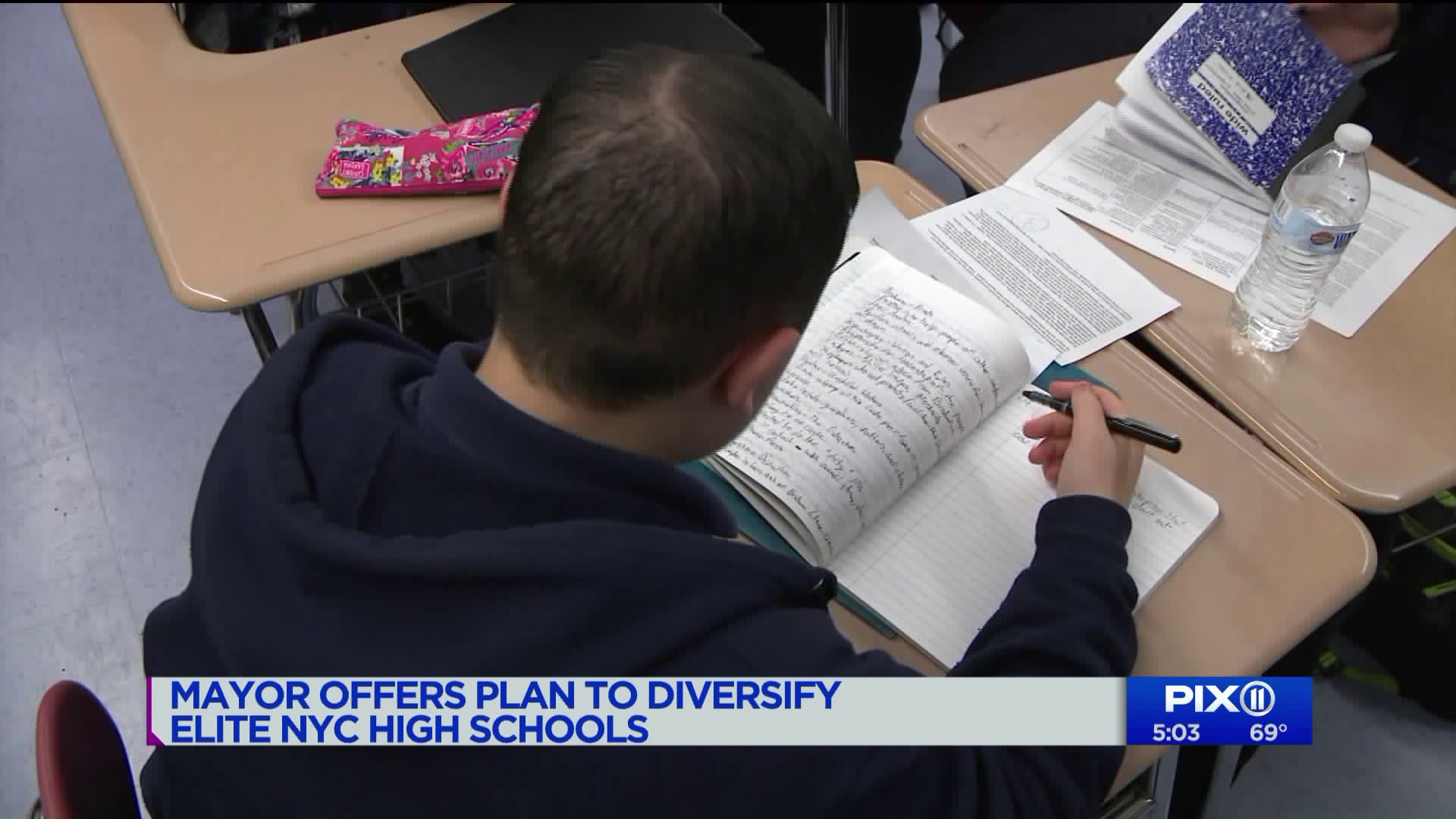 Critics have long complained that the reliance on a single admissions test leads to a lack of diversity at the schools, which are overwhelmingly Asian and white. About 10 percent of the students at the eight school are black or Hispanic, although black and Hispanic students make up two-thirds of the city`s public school population overall.

SUNSET PARK, Brooklyn — It's a measure meant to make the city's most selective public high schools more representative of New York City, but it has also sparked outrage among some city families, particularly some of those with children currently enrolled in those schools, or currently prepping for the test to gain admission.

"Yesterday's policy was the last straw!" said John Chan, president of the Coalition of Asian-Americans for Civil Rights, or CAACR, in a fiery speech on Monday afternoon, translated from Chinese, his native language.

His organization had gathered dozens of mostly Asian community leaders to protest Mayor Bill de Blasio's proposal to change the way prospective students are admitted into the eight elite public high schools. Asian New Yorkers, according to CAACR and the city, have the highest yield of applicants.

Mayor de Blasio unveiled a new admission plan on Friday afternoon, which some criticized as being released when few people were watching. The mayor's rollout also came without consultation with the Asian community, its leaders said. They were further critical because the mayor's proposal is scheduled for a vote on Wednesday in Albany, before many people with a stake in the process can weigh in.

But weigh in people did at the impromptu news conference on Monday, before a packed room of Asian community leaders and activists.

"[De Blasio] took our money instead of helping us out," Asian civil rights leader Chan said through a translator.

His was the first of at least a dozen speeches, all of which expressed negative feelings, ranging from disgust to disappointment to outrage.

The mayor has laid out a two-part proposal, which would replace the current system, in which the city administers the test. Students who get above a baseline score gain admission.

Under Mayor de Blasio's plan, the city test would be replaced by a selection process in which students with the highest middle school grades, combined with the highest state test scores, would gain admission. The mayor's proposal would also set aside more admission spots for low-income students, who would attend a summer preparatory session, before entering the schools.

It's intended to change current inequities. In 2018, blacks and Latinos make up 67 percent of all public school students,according to the Department of Education. However, only 10 percent of those admitted to the city's eight most selective high schools are black or Latino.

One of those schools is Brooklyn Tech, from which David Lee graduated 40 years ago. Lee, now education committee chair of Chinese American Citizens Alliance of Greater New York — the country's oldest Asian civil rights group — said he personally advocated for millions of dollar" for test prep classes for non-Asian students from underserved communities. Better test preparation for applicants of color, he said, gets "more students into these schools."

Particularly in the case of the city's three oldest selective high schools, Stuyvesant, Bronx Science and Brooklyn Tech, the state legislature has to determine whether or not the mayor's proposal can be implemented. There's no indication that there are enough votes currently for the de Blasio proposal to pass.

The mayor's proposal may benefit him more than it does students, CUNY Graduate Center education professor David Bloomfield said.

"This is important for Bill de Blasio's political legacy," Prof. Bloomfield said, adding that it is not at all likely that the mayor's plan will pass the legislature.

"It won't happen," Bloomfield told PIX11 News. But by making the proposal, de Blasio "still has put his stake in the ground."

City Hall has defended the proposal with a variety of statements from de Blasio press secretary Eric Phillips.

“There are a lot of Asian kids -- many from low-income families — who aren’t treated fairly by the single-test system, too,” Phillips said in a recent tweet.

But  the Coalition of Asian-Americans for Civil Rights has organized a 2 p.m. Tuesday rally outside of Mayor De Blasio’s office to protest. They’re holding a second protest on Sunday at 1:00 p.m.