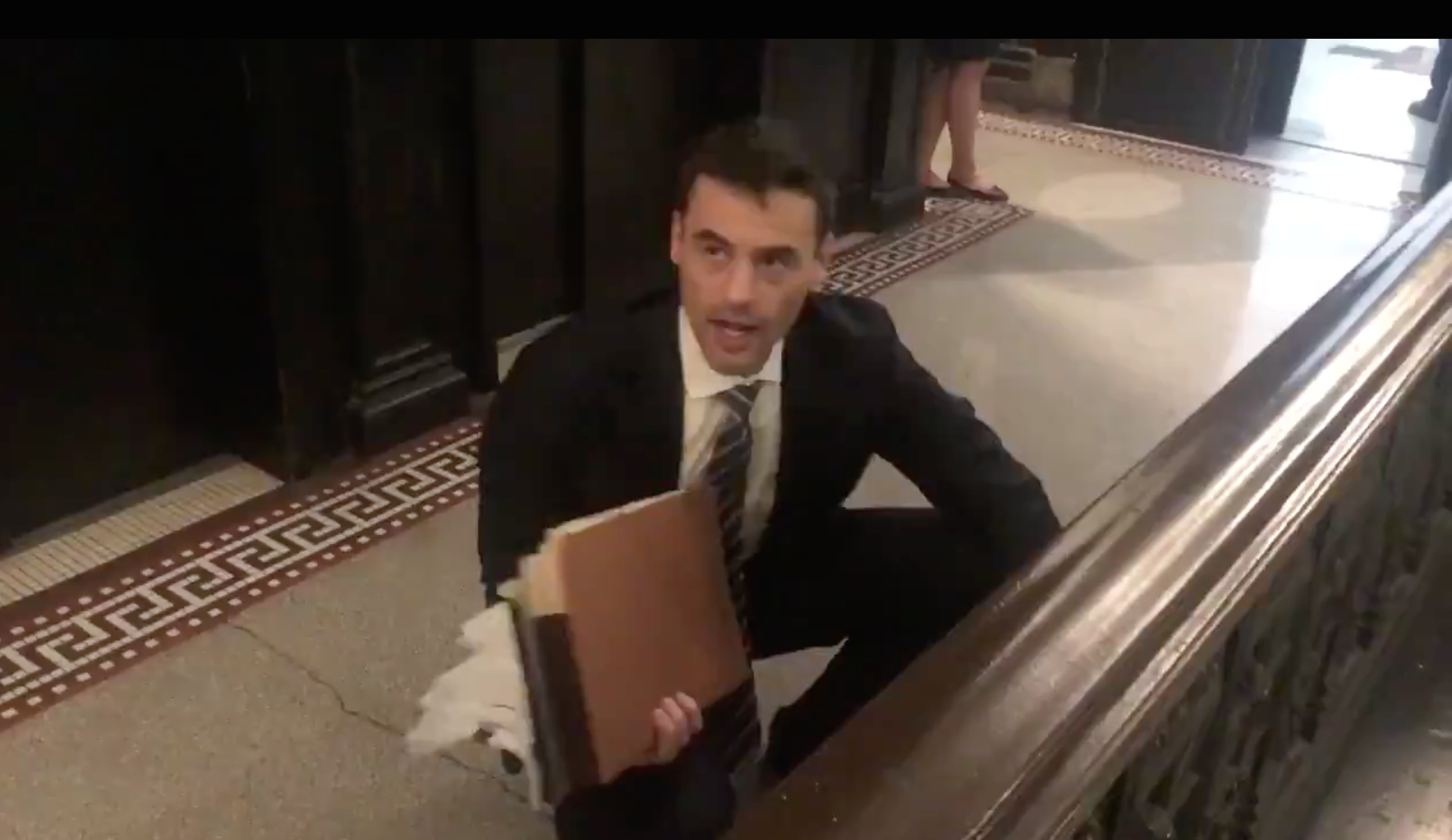 The lawyer was seen in a now-viral video scolding restaurant workers for speaking Spanish. 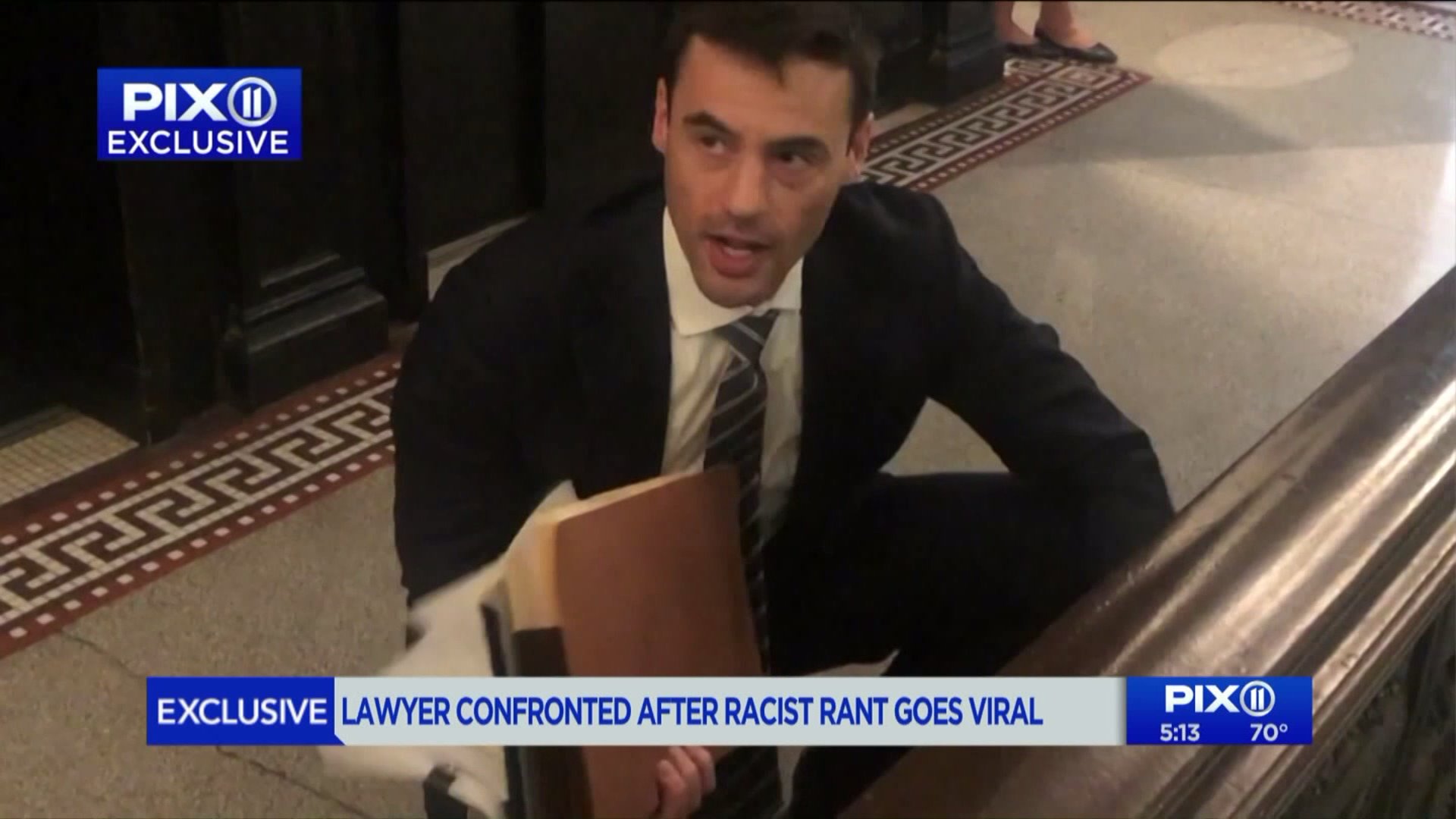 QUEENS, N.Y. — A day after an attorney was caught on camera berating restaurant workers for speaking Spanish and threatening to call immigration agents on them had no comment for PIX11 News Thursday before he headed into a Queens court.

Aaron Schlossberg has been identified by a slew of people online as the man captured in video.

PIX11 News asked him if he anything to say about his newfound infamy. He did not respond and continued into the courtroom.

“Aaron, how does it feel a day after you made national news dude?” asked reporter Andrew Ramos. “A lot of people want to talk to you right now — do you have anything to say?”

Schlossberg, who is an attorney and was working a case at Queens Supreme Court in Long Island City, bee-lined it into the courtroom.

Another attorney was seen telling Schlossberg that he should be disbarred. The lawyer chuckled.

After I confronted Aaron, every lawyer and clerk in that waiting area commended me. One said “I’m glad you did that.”

One attorney also went up to him and told him he should be disbarred.

Footage of Schlossberg's rant was posted online Tuesday. Since then, it's been viewed nearly 5 million times.

In the video, Schlossberg yells after saying he heard two employees at Madison Avenue’s Fresh Kitchen speaking Spanish. During the rant, he accuses the Spanish speakers of being undocumented immigrants.

“And my guess is that they’re not documented so my next call is to ICE to have each one of them kicked out of my country,” he said. “If they have the balls to come here and live off of my money – I pay for their welfare, I pay for their ability to be here.”

The disturbing episode sparked outrage across social media and after it made the rounds, it turned out it wasn’t the first time Schlossberg was caught on camera spewing hate speech.

Schlossberg is a New York business and commercial law attorney who practices in Midtown, about a block away from the restaurant.

Reviews for his firm, The Law Office of Aaron M. Schlossberg Esq. P.L.L.C., plummeted to 1.1 stars on Google and 1 star on Yelp after the incident.

As of Thursday morning, Google appeared to be deleting the recent negative reviews, and Yelp stated it is monitoring the business’ page and removing comments related to the video.

“This business recently made waves in the news, which often means that people come to this page to post their views on the news,” Yelp’s statement read in part.

“It so bizarre, I honestly don’t have a good way to describe it,” Willie Morris, a New York-based consultant told PIX11 News, describing a run-in he had with Schlossberg in 2016 while walking on a street in Midtown.

“What country are you from?” a seemingly aggressive Schlossberg is heard questioning Morris on video he posted on YouTube. “I’m gonna call the police.”

Morris said Schlossberg intentionally shoved him at that night in October, when they made eye contact.

The bizarre attack all came back to Morris when he saw Schlossberg’s racist rant on the news.

“You don’t run into people,” Schlossberg tells Morris. “I’m a citizen and you’re not - you’re an ugly f---ing foreigner so f**k you!”

“I was born in Massachusetts, raised in Virginia and went to school in Alabama,” Morris told PIX11. “You know it just says to me the rhetoric that our leaders put out and that we see broadcast - it makes a difference.”

“It emboldens people, it gives people the courage to say things they usually won’t say.”

Schlossberg appears to be a regular at anti-immigrant rallies, appearing in at least two that surfaced online in the past 24 hours.

With so much to say, it’s unclear why he passed up an opportunity Thursday to defend his recent actions.

It's been close to 48 hours since Schlossberg's rant was posted online and the backlash continues to grow.

A local activist is raising money on the crowd sourcing site GoFundMe to hire a mariachi band to perform outside of the attorney's law office in Midtown.

That fundraiser has already raised $1,100.

Also on Thursday, Rep. Adriano Espaillat (D-NY) said his office will be filing a grievance against Schlossberg, whose behavior has been caught on camera before.

After the initial video went viral, other footage of Schlossberg emerged showing him yelling at pro-Trump rallies. In another video, he allegedly shoved a pedestrian on the sidewalk then told him, "I'm a citizen here. You're not. You're an ugly, f---ing foreigner."