US city, Polish officials in war of words over Jersey City statue status 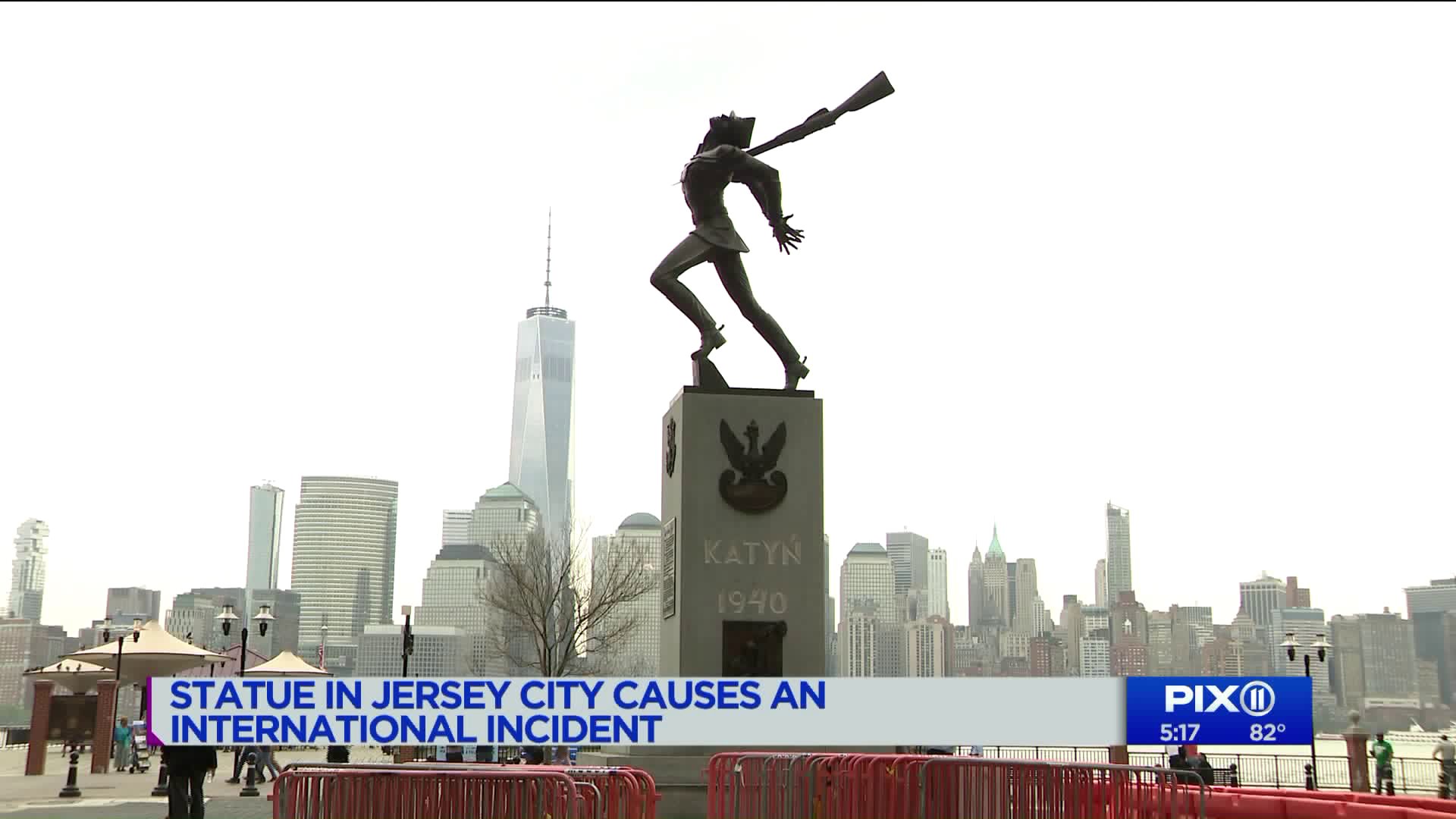 The memorial commemorates the Katyn massacre of tens of thousands of Polish officers with shots to the back of the head. The bronze statue depicts a Polish soldier gagged, bound and impaled in the back with a bayonet. It stands on a granite base containing soil from the Katyn Forest, where many victims were buried on the western edge of Russia.

JERSEY CITY, N.J. — The proposed removal of a statue in New Jersey honoring victims of a 1940 Soviet massacre of Poles has sparked a cross-Atlantic war of words, with a Polish senator decrying the move and Jersey City's mayor calling that man an anti-Semite with no moral authority.

The memorial commemorates the Katyn massacre of tens of thousands of Polish officers with shots to the back of the head. The bronze statue depicts a Polish soldier gagged, bound and impaled in the back with a bayonet. It stands on a granite base containing soil from the Katyn Forest, where many victims were buried on the western edge of Russia.

Created by Polish-American monument sculptor Andrzej Pitynski, the statue has been a fixture since 1991 at Exchange Place in Jersey City just across the Hudson River from New York City.

The memorial will be moved for a renovation of the plaza where it stands, The Jersey Journal reported. The head of the group organizing the renovation has called the statue "gruesome" and has said he prefers that it get a new home.

"I don't think the statue's appropriate for a major metropolitan area," Mike DeMarco, chair of the Exchange Place Special Improvement District, told the newspaper. "It's a little gruesome. ... I can't imagine how many mothers go by and have to explain it to their children."

But Stanislaw Karczewski, the speaker of the Polish senate, said removing the memorial would be unacceptable.

"It is a really scandalous and very unpleasant situation for us," Karczewski told Polish radio this week. He said the memorial "speaks of Polish heroism, Polish heroes, and also speaks of tragic events."

Jersey City Mayor Steve Fulop scoffed at the criticism, saying Karczewski is a "known anti-Semite" and alleging the Polish government has no moral authority to criticize his city.

He pointed to a new Polish law that makes it a crime to blame Poland for any of the Holocaust crimes of Nazi Germany. The law has sparked criticism in the U.S. and particularly in Israel, where some fear its aim is to quash discussions about Polish anti-Semitic violence during the German occupation in World War II.

Karczewski belongs to the ruling party that pushed through the law.

Fulop's maternal grandparents were Holocaust survivors. His grandmother was deported to the Auschwitz concentration camp in Nazi-occupied Poland, where more than 1 million people were murdered, mostly Jews. His grandfather spent time in a labor camp.

The mayor said there will be a discussion with the community on when, where and if the statue would be re-installed after the work on the park is complete.

Krzysztof Szczerski, an adviser to Polish President Andrzej Duda, said the president believes the Katyn monument "is an important testimony to homage and remembrance of the victims of genocide" and hopes for a resolution.

He added that the president believes that a country that "treats heroes with such respect, especially those killed for their homeland," would respect such a monument, according to a report by the state news agency PAP.

The Katyn massacre came after the Soviet Red Army invaded eastern Poland in September 1939 took the Polish officers prisoner. The secret police killed 22,000 Poles, aiming to eliminate a military and intellectual elite that might have put up stiff resistance to Soviet control. For decades, Moscow blamed the Nazis for the massacre, but then in 1990 admitted that Soviet leader Josef Stalin had ordered it.