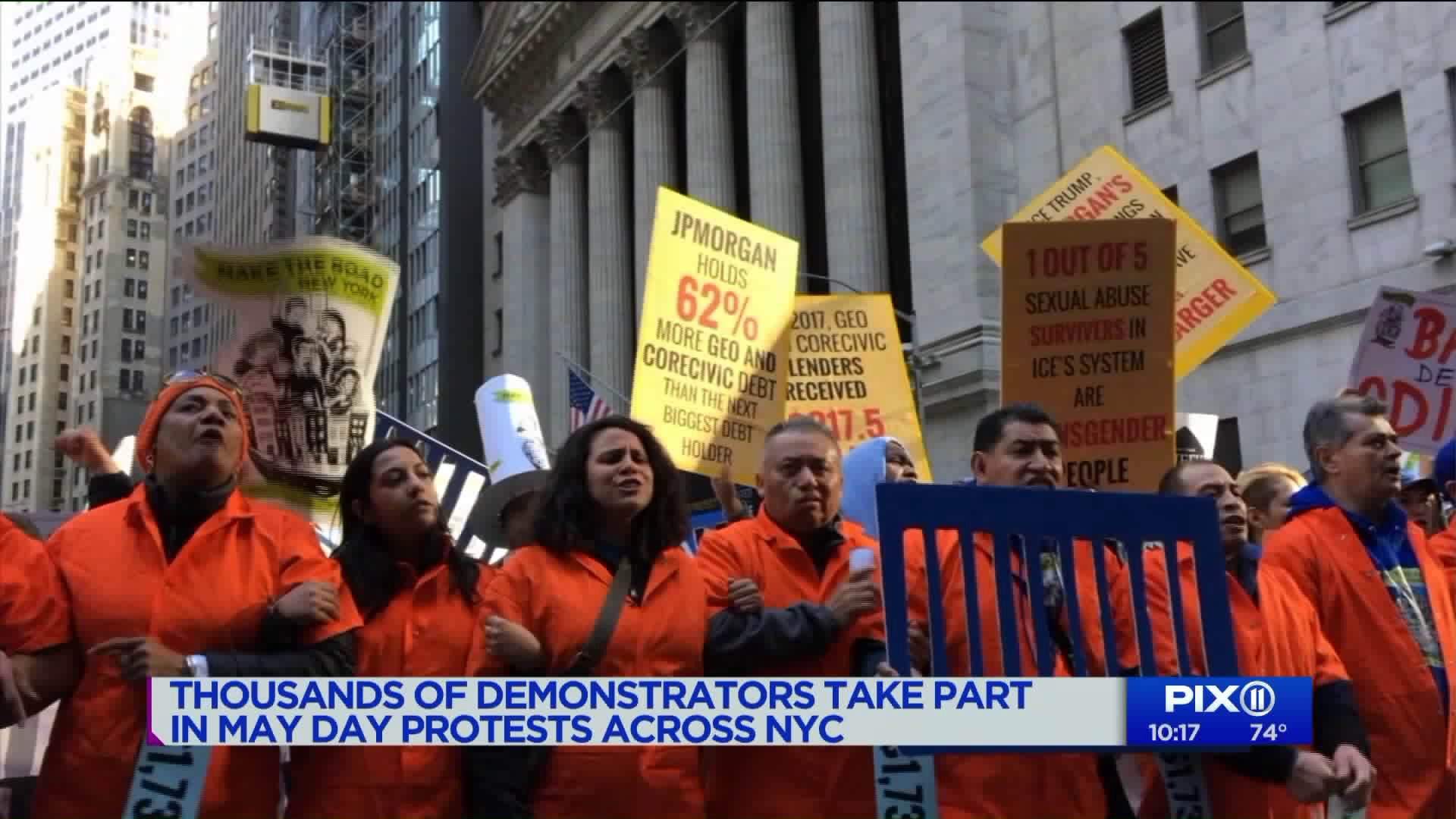 Demonstrators across the globe took to the streets on Tuesday to demand better working conditions, as part of rallies marking International Workers` Day. Held on May 1 each year -- known as May Day -- the rallies date back to the 1880s.

NEW YORK — Protesters took to the streets Tuesday to mark May Day, demanding better rights for workers as well as protections for immigrants.

Here in New York City, many of the marches focused on the Trump administration’s crackdown on immigration. Organizers say the rallies are the first step toward getting more people to the polls for the midterm elections.

“We are going to be fighting in the streets, we’re going to be fighting in the courts and mobilizing for the 2018 elections because that is the way to send a message to the Trump administration,” said Steven Choi, executive director of the New York Immigration Coalition. “During this Trump presidency, immigrants have been under attack, workers have been under attack, now more than ever it’s critical for immigrants and workers to come together to understand that our fight is just one fight and we’re here today to make a statement we are partners in power.”

May Day demonstrations in New York started with a rally in Battery Park. Democratic gubernatorial candidate Cynthia Nixon marched with the group along Broadway to Wall Street.

Under the towering arch in Washington Square Park, they sent their message loud and clear.

They chanted about giving power to the people and held up signs like “Stop the War on Workers” and “Stop ICE Terrorism Defend Immigrants and Refugees.”

The group Rise and Resist NY was front and center at the Washington Square Park rally.

“We would like to get rid of ICE — Immigration and Custom enforcement, which is an out-of-control agency, they have no checks and balances,” said Jody Kuh, who works with Rise and Resist. “Right now, in this country, immigrants and workers are under attack and I think it’s important those who can stand up, do.”

Dating back to the late 1800s and held on May 1 of each year, it’s traditionally a time for laborers to demand better working conditions.

Over the years, the focus has expanded to include the cause of trade unions, as well as those of immigrants and general human rights.

Many say May Day this year takes on added significance given the political and societal climate.

“We have a teacher who’s under the DACA program, an amazing member of our community facing deportation next year, we have kids that are undocumented, that want to be Americans and who work so hard,” said Thomas Hasler, a high school teacher. His students are mostly immigrants.

Although things got loud, Tuesday's protests were largely peaceful.

“We’ve got to make May Day 365 days a year,” said Alberto Arroyo, with Workers United/SEIU.