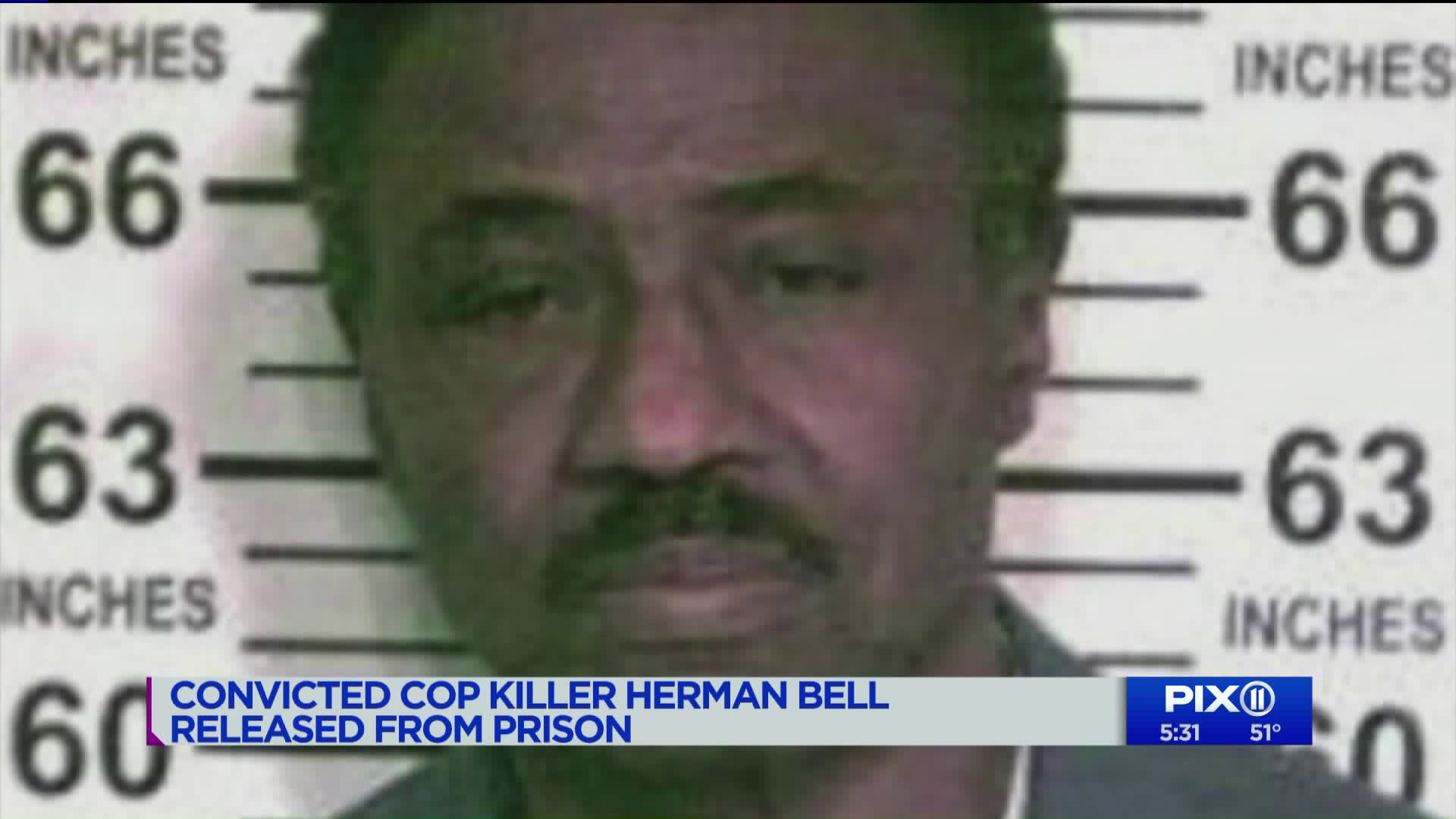 When Bell was sent to prison, the maximum sentence allowed was 25 years to life. That`s what gave him the chance for freedom on this Friday nearly 47 years after Jones and PiagentinI were assassinated at the Harlem housing project.

WALLKILL, N.Y. — At exactly 5 p.m. Friday, two dark blue vans traveled one after the other on the road outside Shawangunk Correctional Facility. One of them was carrying 70-year-old Herman Bell, a 3-time cop killer, to his first evening of freedom in 45 years.

"He will make a mistake. And we will be there to put him back," Diane Piagentini, the widow of slain NYPD Officer Joseph Piagentini, said angrily from her Long Island home Friday, waiting for official word of Bell’s release. "He thinks he's free. He's not free."

Bell was freed despite last minute efforts by the Patrolmen’s Benevolent Association to keep him behind bars, until all court appeals could be exhausted. A state judge this week refused to delay Bell’s release.

It was believed that Bell would be reunited with family members in the New York City area.

"He killed my husband, and Waverly," Diane Piagentini said, choking back tears. "He killed them because they wore the blue uniform — and for no other reason than that."

Deborah Piagentini followed her father into a law enforcement career, but never had the chance to really know him.

Piagentini was just 3 years old when her 27-year-old dad, Joseph Piagentini, and his NYPD partner, Waverly Jones, were assassinated by a team of Black Liberation Army revolutionaries. Her father had begged for his life during the ambush, and the medical examiner found 22 bullet holes in Piagentini’s body.

“Who releases a 3-time cop killer?” Deborah Piagentini, now a U.S. Marshal, fumed on the phone to PIX11 Friday morning. “There’s all these political agendas going on. There’s a loss of humanity and a loss of right and wrong.”

Deborah PiagentinI is seen as a baby with her father, Joseph Piagentini. It's the only picture she has of her dad, who was killed while on patrol in NYC in 1971.

Deborah Piagentini, 50, provided PIX11 with one of the only photos she has of her with her father — the young officer is seen cradling his newborn daughter at home. Deborah is the oldest of two girls.

Piagentini added, “I want Gov. Cuomo to answer this question: ‘Why won’t you sit down with the Piagentini family?’ We want to express our outrage over this.”

The governor has stated he disagrees with the decision made by two of three parole commissioners in March — that Bell, now 70, should be freed, after his eighth appearance before the board — but since the Parole Board is an independent body, Cuomo has essentially said his hands are tied.

Yet, law enforcement is well aware that Cuomo has presided over a restructuring of the state correction and parole system. An executive law that was implemented in 2011 called for the parole board to be more “forward thinking” — with a focus on prisoner rehabilitation and less of a focus on the inmate’s original crime.

The Center for Constitutional Rights, which represented Bell in the 1970s and has advocated for his parole, noted that Bell scored as a very low risk for reoffending.

Officer Joseph Piagentini was executed with his partner, Waverly Jones, on May 21, 1971 in Harlem.

He had a clean prison record, earned college degrees and mentored other inmates.

Bell and two other men lured Jones and Piagentini to a Harlem housing project in 1971 with a phony 911 call. When the officers arrived, they were ambushed from behind by three BLA gunmen.

Bell was captured two years later and sentenced in 1979 for the New York police assassinations.

For years, he insisted he was a political prisoner who was framed.

In 2012, he changed his statements to the sitting parole board, saying “There was nothing political about the act, as much as I thought at the time. It was murder and horribly wrong … It was horrible, something that I did, and feel great remorse for having done it.”

“This man has not changed his ways. The only thing he did was ‘snow’ this parole board.”

Mayor Bill de Blasio and NYPD Commissioner James O’Neill wrote letters to the state condemning the parole decision, with O’Neill stating that Bell didn’t have a change of heart, just a “change of strategy.”

Last fall, Bell said a correction officer assaulted him during a prison transfer, leaving him with broken ribs and an eye injury. The officer was suspended. Bell told the parole board this year the attack left him with short-term memory loss and difficulty speaking and writing.

Piagentini’s daughter told PIX11 it’s ironic that Bell is benefitting from a change in Parole guidelines — but didn’t have his prison term “upgraded” when new state law was enacted to permit judges to sentence cop killers to life without parole.

When Bell was sent to prison, the maximum sentence allowed was 25 years to life. That’s what gave him the chance for freedom on this Friday — nearly 47 years after Jones and PiagentinI were assassinated at the Harlem housing project.