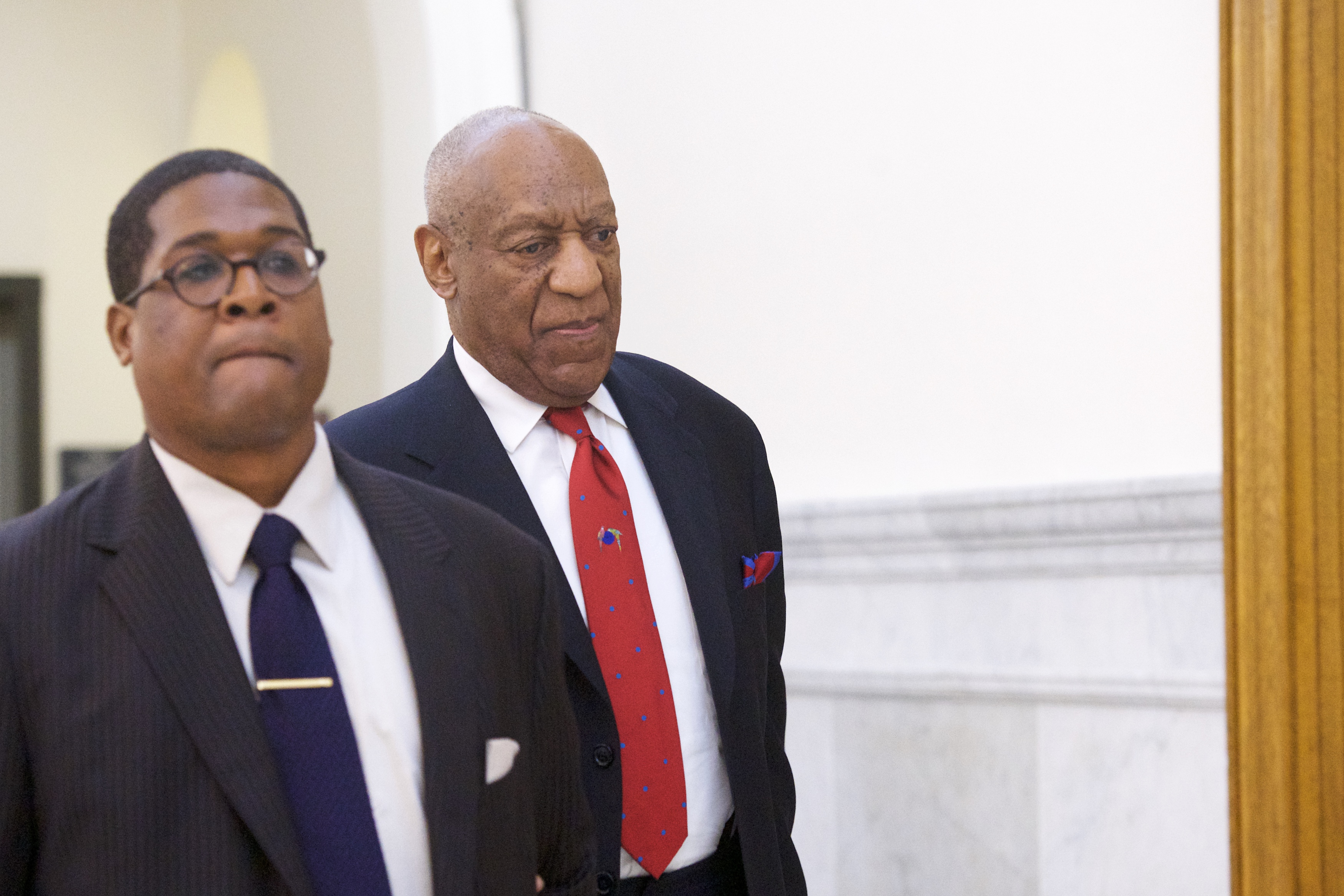 Bill Cosby was convicted Thursday of drugging and molesting a woman. The 80-year-old disgraced comedian could face up to 30 years in prison. 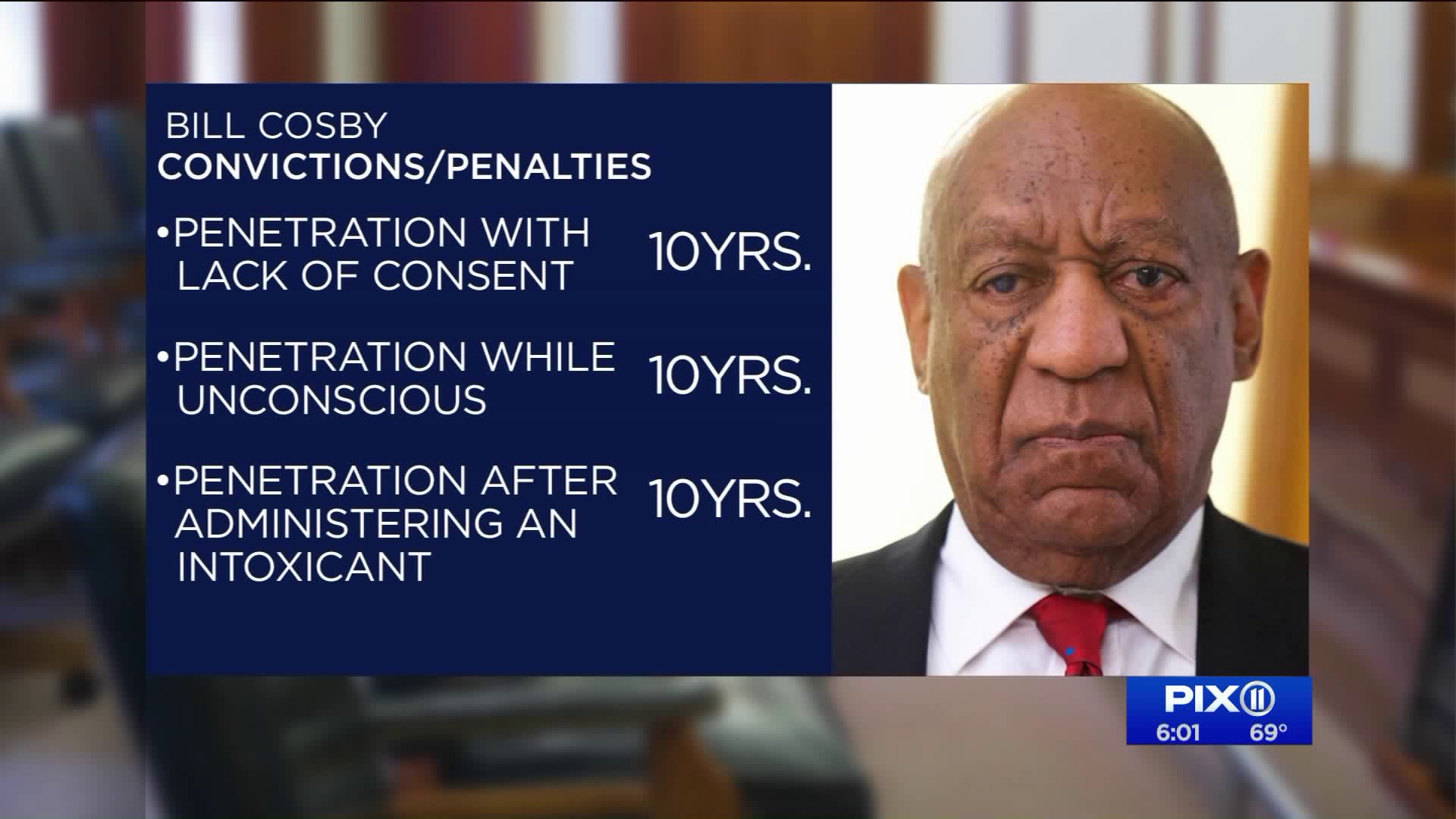 NORRISTOWN, Pa. — Bill Cosby was convicted Thursday of drugging and molesting a woman in the first big celebrity trial of the #MeToo era, completing the spectacular late-life downfall of a comedian who broke racial barriers in Hollywood on his way to TV superstardom as America's Dad.

Cosby, 80, could get up to 10 years in prison on each of the three counts of aggravated indecent assault.

He is likely to get less than that under state sentencing guidelines, but given his age, even a modest term could mean he will die behind bars.

The judge ruled that Cosby will remain free pending sentencing. He's been ordered to remain in the state of Pennsylvania.

A jury concluded that Cosby sexually violated Temple University employee Andrea Constand at his suburban Philadelphia home in 2004. He claimed the encounter was consensual.

The verdict came after a two-week retrial in which prosecutors put five other women on the stand who testified that Cosby, married for 54 years, drugged and violated them, too. One of those women asked him through her tears, "You remember, don't you, Mr. Cosby?"

The panel of seven men and five women reached a verdict after deliberating 14 hours over two days, vindicating prosecutors' decision to retry Cosby after his first trial ended with a hung jury less than a year ago.

Constand, 45, a former Temple women's basketball administrator, told jurors that Cosby knocked her out with three blue pills he called "your friends" and then penetrated her with his fingers as she lay immobilized, unable to resist or say no.

It was the only criminal case to arise from a barrage of allegations from more than 60 women who said the former TV star drugged and molested them over a span of five decades.

Another prosecutor, Kristen Feden, said Cosby was "nothing like the image that he played on TV" as sweater-wearing, wisdom-dispensing father of five Dr. Cliff Huxtable on "The Cosby Show."

Cosby's retrial took place against the backdrop of #MeToo, the movement against sexual misconduct that has taken down powerful men in rapid succession, among them Harvey Weinstein, Matt Lauer, Kevin Spacey and Sen. Al Franken.

The jurors all indicated they were aware of #MeToo but said before the trial they could remain impartial. Cosby's lawyers slammed #MeToo, calling Cosby its victim and likening it to a witch hunt or a lynching.

After failing to win a conviction last year, prosecutors had more courtroom weapons at their disposal for the retrial. The other accusers' testimony helped move the case beyond a he-said, she-said, allowing prosecutors to argue that Cosby was a menace to women long before he met Constand. Only one other accuser was permitted to testify at Cosby's first trial.

Their star witness, a longtime Temple employee, testified that Constand once spoke of setting up a prominent person and suing. Constand sued Cosby after prosecutors initially declined to file charges, settling with him for nearly $3.4 million over a decade ago.

"You're dealing with a pathological liar," Mesereau told the jury.

His colleague on the defense team, Katheen Bliss, derided the other accusers as home-wreckers and suggested they made up their stories in a bid for money and fame.

But Cosby himself had long ago confirmed sordid revelations about drugs and extramarital sex.

In a deposition he gave over a decade ago as part of Constand's lawsuit, Cosby acknowledged he had obtained quaaludes to give to women he wanted to have sex with, "the same as a person would say, 'Have a drink.'" The sedative was a popular party drug before the U.S. banned it more than 30 years ago.

Cosby also acknowledged giving pills to Constand before their sexual encounter. But he identified them as the over-the-counter cold and allergy medicine Benadryl and insisted they were meant to help her relax.

The entertainer broke racial barriers as the first black actor to star in a network show, "I Spy," in the 1960s. He created the top-ranked "Cosby Show" two decades later. He also found success with his "Fat Albert" animated TV show and served as pitchman for Jello-O pudding.

Later in his career, he attracted controversy for lecturing about social dysfunction in poor black neighborhoods, railing against young people stealing things and wearing baggy pants.

It was Cosby's reputation as a public moralist that prompted a federal judge, acting in response to a request from The Associated Press, to unseal portions of the deposition.

Its release helped destroy the "Cosby Show" star's career and good-guy image. It also prompted authorities to reopen the criminal investigation, and he was charged in late 2015.

The Associated Press does not typically identify people who say they are victims of sexual assault unless they grant permission. Constand has done so.