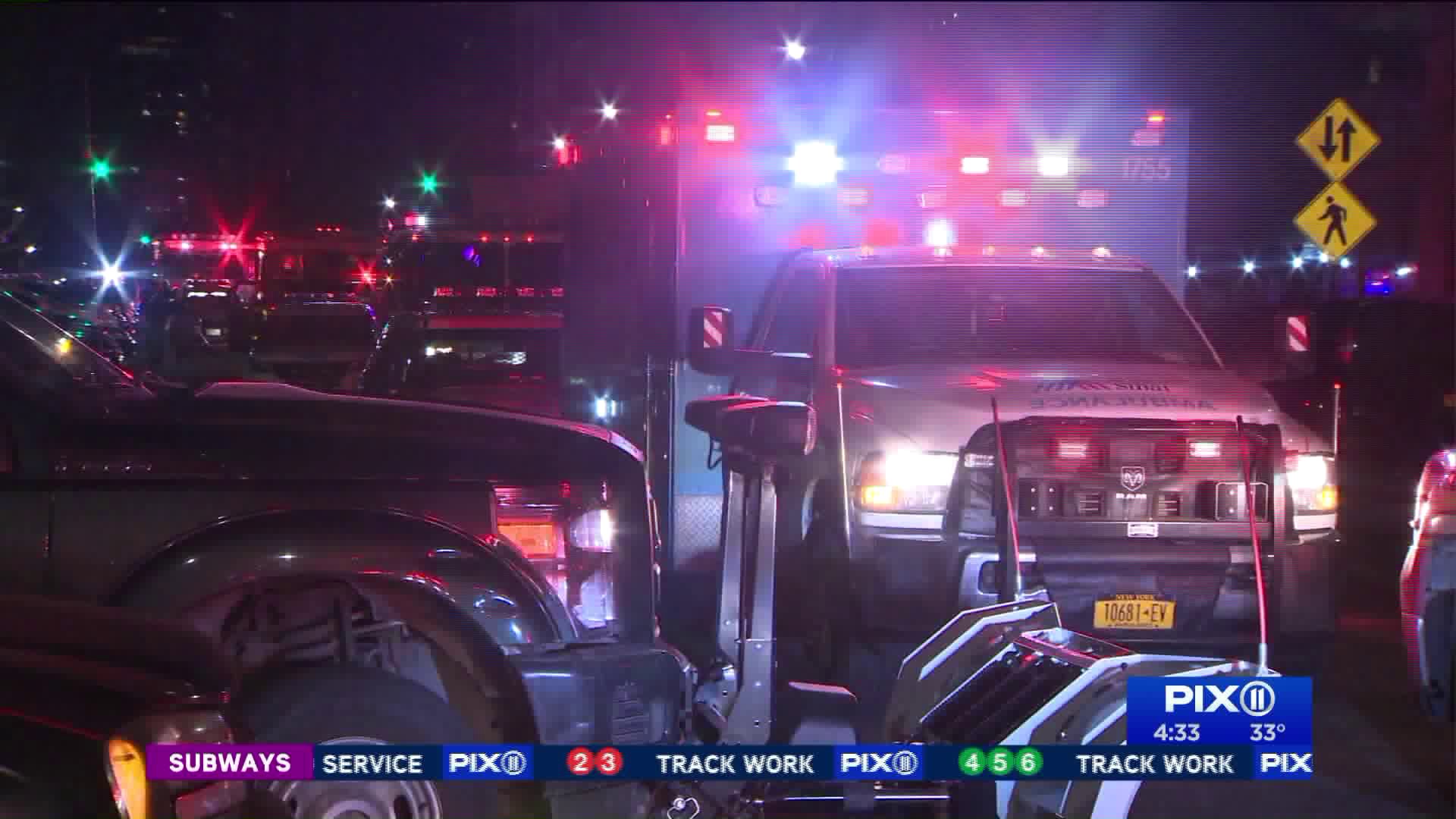 5 passengers are dead after a helicopter crashed into the East River.

NEW YORK — The fatal New York City helicopter crash that killed everyone on board except the pilot may have been caused by a passenger's piece of luggage, the pilot told investigators.

Five passengers were killed when a helicopter crashed into the East River Sunday evening, an NYPD spokesman said Monday morning.

Vance was heard saying "Mayday, mayday, mayday" on emergency radio transmission.  The pilot reported an "engine failure over the East River" and referenced a hotel, while the person at the other end of the transmission had trouble making out what the pilot was saying.

The National Transportation Safety Board will determine probable cause of the incident, the Federal Aviation Administration said.

The NTSB tweeted that an investigation team of 14 people would arrive in New York Monday morning. The NTSB has also requested any witnesses with footage of the incident contact the agency at witness@NTSB.gov.

The pilot was able to escape after the aircraft flipped upside down in the water, officials said. He was rescued by a tugboat.

The helicopter, a private charter hired for a photo shoot, went down near Gracie Mansion, the mayoral residence.

Video taken by a bystander shows the red helicopter land hard in the water and then capsize, its rotors slapping at the water.

The passengers were recovered by police and fire department divers, who had to remove them from tight harnesses while they were upside down, Nigro said.

"It took awhile for the divers to get these people out. They worked very quickly as fast as they could," Nigro said. "It was a great tragedy that we had here."

Witnesses on a waterfront esplanade near where the aircraft went down said the helicopter was flying noisily, then suddenly dropped into the water and quickly submerged. But the pilot appeared on the surface, holding onto a flotation device as a tugboat and then police boats approached.

“We noticed a red helicopter going full speed toward the water — looked very surreal. Next thing we know it’s approaching the water slowly and then it completely crashed and sunk," witness Arineah Nazarian told PIX11.

News footage showed one victim being loaded into an ambulance while emergency workers gave him chest compressions.

A bystander, Susan Larkin, told The Associated Press that she went down to see rescue boats in the river and a police helicopter circling overhead, hovering low over the water.

"You could clearly see they were searching," she said.

The aircraft was owned by Liberty Helicopters, a company that offers both private charters and sightseeing tours popular with tourists. A phone message left with the company was not immediately returned.

Company had three crashes in 11 years

Liberty Helicopters describes itself on its website as "the largest and most experienced helicopter sightseeing and charter service in New York City."

The company has "a fleet of 10 state-of-the-art Airbus helicopters (formerly American Eurocopter)," according to the website. "We have been in business and flying safely for over 30 years," the website says.

This is the company's third crash in 11 years, according to CNN affiliate WABC-TV. In August 2009, nine people were killed after a helicopter and a small, private plane crashed into each other over the Hudson River. Investigators said the helicopter was flying too high.

Two years before that, in July 2007, a Liberty sightseeing chopper carrying eight people dropped into the Hudson river. An off-duty paramedic on board helped everyone escape, WABC reports.

The FAA identified it as a Eurocopter AS350.

The helicopter was upside down and submerged when emergency responders reached it, authorities said.

Police said the chopper was in the water around 23rd Street and called for a barge with a crane to pull it out.

Did you witness the helicopter crash in the East River in NYC? Do you have video, photos? Please contact NTSB; witness@ntsb.gov

CNN, the Associated Press and PIX11 contributed to this report.