Names of all 17 people killed in Florida school shooting released 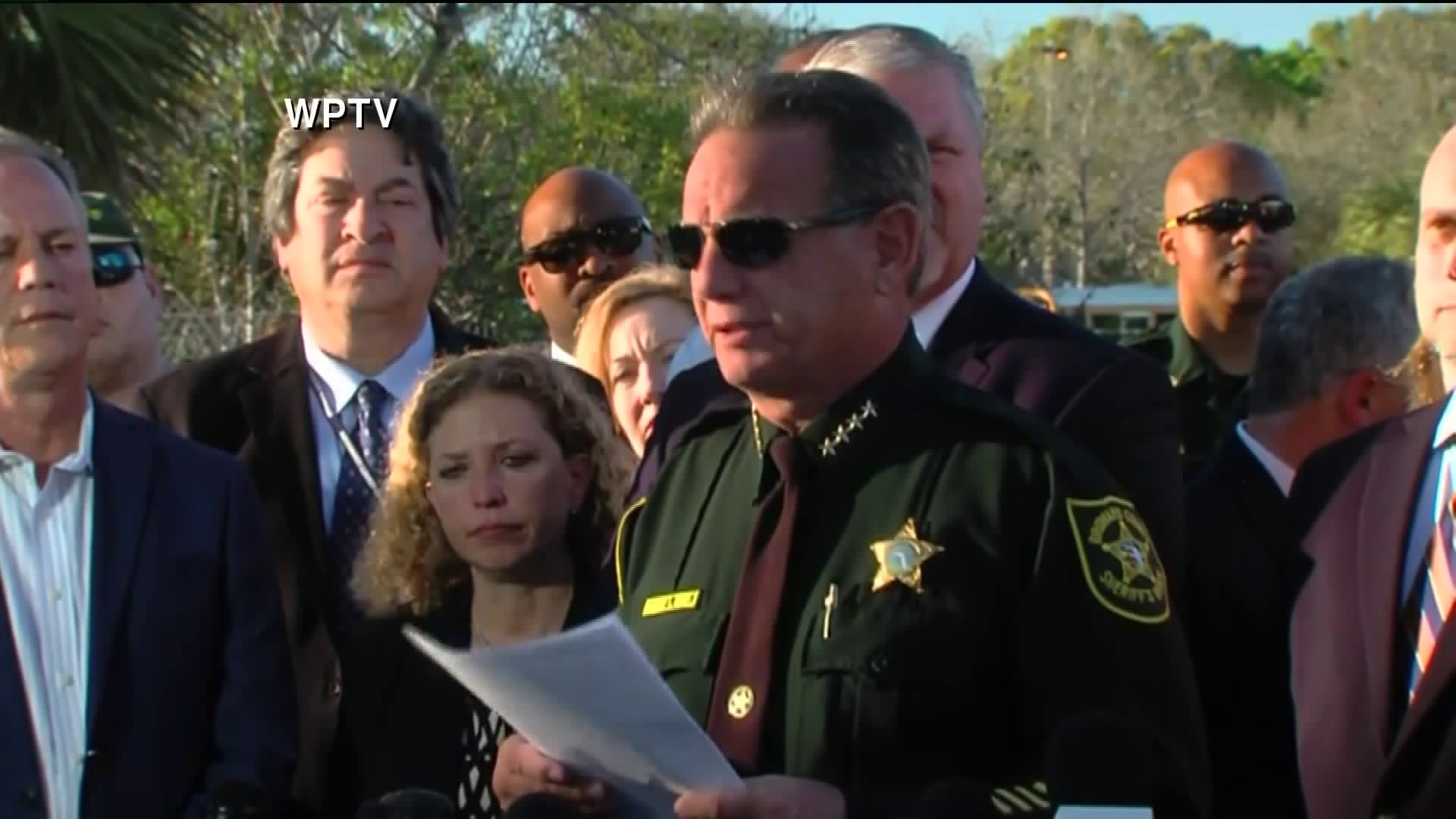 The Broward County sheriff read a list of the victims` names, including that of his "very, very good friend." 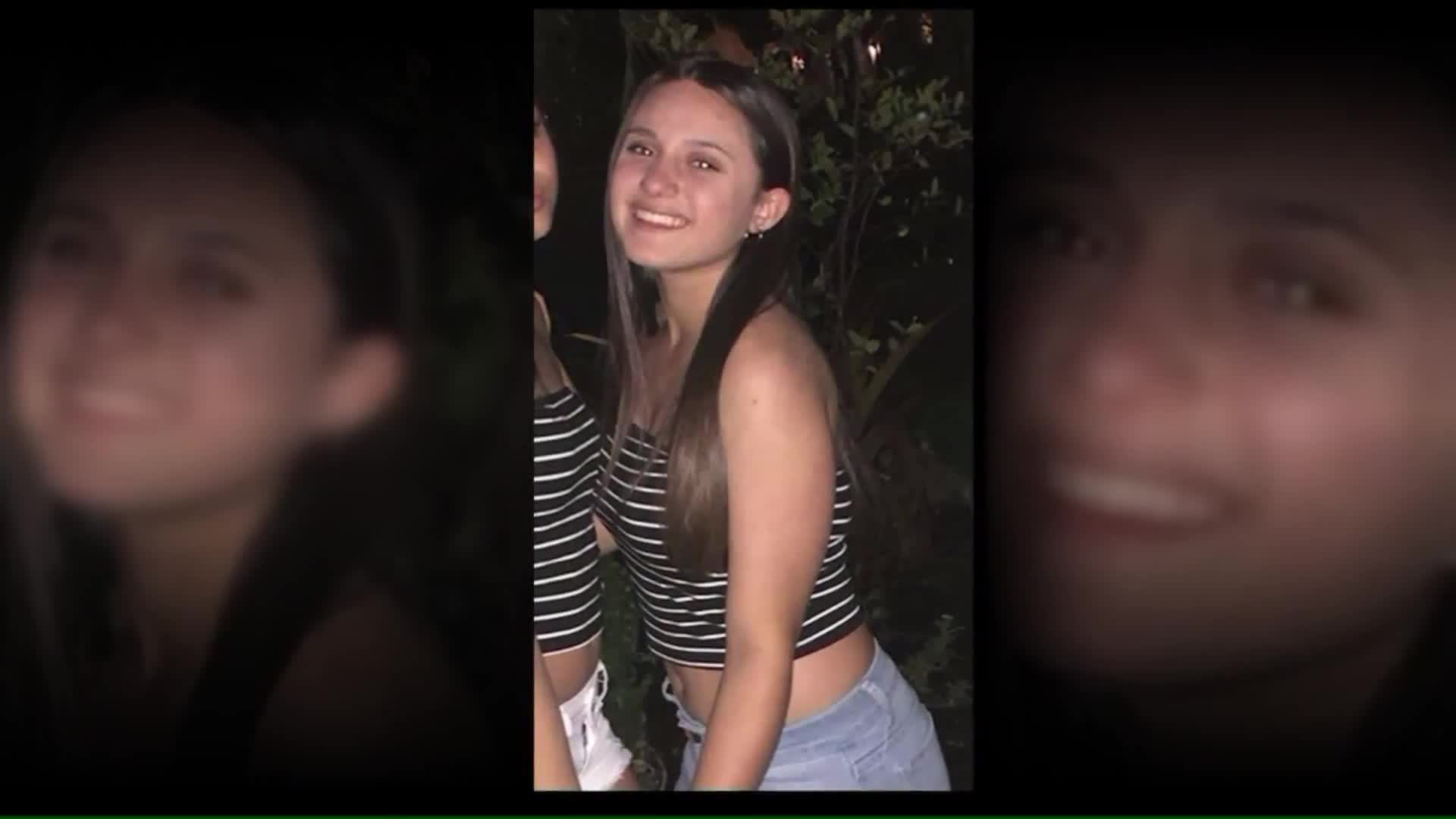 They are among the 17 people killed by a gunman at Marjory Stoneman Douglas High School in Parkland, Fla., on Wednesday.

Broward County Sheriff Scott Israel said Thursday that all families who lost loved ones in the shooting have been notified. He has now released all the victims' names.

These are the lives that were lost:

An amateur soccer club said one of its players, Alyssa Alhadeff, was among the students killed in the mass shooting at Marjory Stoneman Douglas High School.

Parkland Soccer Club posted on its Facebook page that Alhadeff was a "loved and well respected member of our club and community."

The club posted a note it said was from her family which read: "To Alyssa's Friends honor Alyssa by doing something fabulous in your life. Don't ever give up and inspire for greatness. Live for Alyssa! Be her voice and breathe for her. Alyssa loved you all forever!"

"President Trump, please do something," Lori Alhadeff said. "Do something. Action. We need it now. These kids need safety now."

Lori Alhadeff began her day by dropping off her daughter at school and telling her that she loves her. Hours later, she was running toward the school after learning about the shooting.

Students said geography teacher Scott Beigel, 35, helped them enter a locked classroom to avoid the gunman and paid for the brave act with his life.

"If the shooter would have come into the room, I probably wouldn't be speaking to you now," student Kelsey Friend told Good Morning America.

Friend said when she heard gunshots and realized it wasn't a drill she followed other students toward the classroom.

Beigel "unlocked the door and let us in," she said. "I thought he was behind me, but he wasn't. When he opened the door he had to relock it so we could stay safe, but he didn't get a chance to."

Martin Duque was one of Isaac Briones' best friends.

The 15-year-old Briones called him "one of the nicest people I knew."

Briones said he last saw Martin the day of the shooting during first period when they were "just playing around, talking about jokes and stuff." On Thursday, Briones was outside the school with others holding a group of white balloons for the victims.

On Instagram, Miguel Duque wrote that words can't describe the pain of losing his brother.

He added: "I love brother Martin you'll be missed buddy. I know you're in a better place. Duques forever man I love you junior!!! R.I.P Martin Duque!"

Words can not describe my pain. I love brother Martin you’ll be missed buddy. I know you’re in a better place. Duques forever man I love you junior!!! R.I.P Martin Duque! 🖤

Dworet, a senior at Stoneman Douglas high school, was killed in the shooting, the University of Indianapolis confirmed. Dworet was recruited for the university swim team and would have been an incoming freshman this fall.

"Nick's death is a reminder that we are connected to the larger world, and when tragedy hits in places around the world, it oftentimes affects us at home," said Robert L. Manuel, University of Indianapolis president.

"Today, and in the coming days, I hope you will hold Nick, his family, all of the victims, as well as the Parkland community and first responders in your prayers."

Feis, the assistant football coach, was killed when he threw himself in front of students to protect them from oncoming bullets, according to Lehtio. He suffered a gunshot wound and later died after he was rushed into surgery, Lehtio said.

Aaron Feis was an Assistant Football Coach and security guard. He selflessly shielded students from the shooter when he was shot. (Twitter/MSDEagles)

"He died the same way he lived -- he put himself second," she said. "He was a very kind soul, a very nice man. He died a hero."

Colton Haab, a 17-year-old junior who had a close relationship with Feis, told CNN he saw the coach running toward the sounds of gunshots.

"That's Coach Feis. He wants to make sure everybody is safe before himself," Haab said.

"(He) made sure everyone else's needs were met before his own. He was a hard worker. He worked after school, on the weekends, mowing lawns, just helping as many people as possible," Haab added.

Guttenberg was among those who died in the school shooting, according to a Facebook post by her father, Fred.

Jaime Guttenberg was killed in a mass shooting in Florida on Feb. 14, 2018. (Facebook)

"My heart is broken. Yesterday, Jennifer Bloom Guttenberg and I lost our baby girl to a violent shooting at her school. We lost our daughter and my son Jesse Guttenberg lost his sister.

"I am broken as I write this trying to figure out how my family gets through this. We appreciate all of the calls and messages and we apologize for not reacting to everyone individually," he added. "Hugs to all and hold your children tight."

Skidmore College, which Fred Guttenberg attended, released a statement saying their hearts go out to Jaime's parents and others affected by the tragedy.

"There really are no words to lessen the suffering that the families of victims are feeling at this moment, but perhaps knowing that we stand with them can provide some small measure of solace," the college said.

A husband, father of two and the athletic director at Marjory Stoneman Douglas High School, Chris Hixon wasn't shy about jumping in wherever he was needed, said friend and one-time colleague Dianne Sanzari.

Chris Hixon was reported to have been killed in the shooting at a school in Florida by a spokeswoman for the school's football program. (Marjory Stoneman Douglas High School website)

Hixon was a member of a Roman Catholic church in Hollywood. The Archdiocese of Miami confirmed his death Thursday.

When a volleyball team needed a fill-in coach, Hixon took over; the same thing happened with the wrestling team, Sanzari said. And when the school needed someone to patrol the campus and monitor threats as a security specialist, Hixon did that, too.

It was in that security role that Hixon apparently came within range of the shooter.

Fifteen-year-old Luke Hoyer was a loving, sweet person who loved basketball and "smiled all the time," his aunt Joan Cox said.

She said Luke's parents, Gena and Tom Hoyer, searched for their son at hospitals before finally going to the law enforcement command center, where they eventually learned he had died.

"It's just a terrible thing," said Cox, who said the family — including Luke's older sister Abby and brother Jake — spent Christmas with her and other family in South Carolina. "We just all pretty much can't get over it."

Loughran, 14, was an excellent student who loved the beach and her cousins, according to her family.

An aunt, Lindsay Fontana, wrote on Facebook: "I had to tell my 8-year-old daughters that their sweet cousin Cara was killed in the shooting at Stoneman Douglas High School yesterday. We are absolutely gutted."

"While your thoughts are appreciated, I beg you to DO SOMETHING," she wrote. "This should not have happened to our niece Cara and it cannot happen to other people's families."

Loughran's neighbor posted a picture of her cheering on a young boy riding a bike with training wheels.

"RIP Cara," Danny Vogel wrote, "and fly with the angels. You will be greatly missed, and we will always love you and celebrate your beautiful life."

Gina Montalto was a 14-year-old freshman who participated on the winter color guard squad at the school.

Friends and relatives posted tributes on Facebook. Her mother, Jennifer Montalto, called her "a smart, loving, caring, and strong girl who brightened any room she entered."

One of Montalto's color guard instructors from middle school, Manuel Miranda, told the Miami Herald that Montalto was "the sweetest soul ever."

He was known by his nickname "Guac," short for "guacamole," because many couldn't pronounce his first name.

"My friend will literally never get to say, 'I graduated high school,'" said Tyra Hemans, a 19-year-old who said she has been friends with Oliver since they were freshmen.

Hemans said she last saw her friend at school the day of the shooting.

"It was just a brief 'Happy Valentines,'" she said. "He was with his girlfriend and I was just like, 'Oh my God, you guys are so cute."

She added, "He's just a goofball. He's the only kid you'd know that would dye his hair bleach blond, walk around school, put some tiger stripes in and just be unique. He was a unique soul."

Alaina Petty, 14, was among those who died in the shooting, great-aunt Claudette McMahon Joshi confirmed in a Facebook post.

"There are no hastags for moments like this, only sadness," she wrote, asking people to lift up Petty's family in prayer.

Alaina Petty was in her school JROTC program and volunteered for the “Helping Hands” program of the Church of Jesus Christ of Latter-day Saints. pic.twitter.com/ORFYbY5eiC

Meadow Pollack's parents called her phone repeatedly only to hear it ring, as they kept an anxious vigil outside the hospital. But on Thursday, her father, Andrew Pollack, confirmed that his daughter was among the dead, the Palm Beach Post reported.

Pollack, an 18-year-old senior, had planned to attend Lynn University, her father said.

"Her life was taken way too soon and I have no words to describe how this feels," friend Gii Lovito posted on Facebook.

Family friend Adam Schachtel said in a Facebook post that "an angel was taken away from us in that horrific tragedy ... no words can be said so just prayers and sadness."

Helena Ramsey was soft-spoken, but also smart and a go-getter, her cousin Sefena Cooper said Thursday.

The 17-year-old junior especially loved hanging out with friends and family, "and for this to happen is heartbreaking," Cooper said.

"Although somewhat reserved, she had a relentless motivation towards her academic studies and her soft warm demeanor brought the best out in all who knew her," another relative, Curtis Page Jr., wrote on Facebook.

Trombone and baritone player Alex Schachter was a "sweetheart of a kid," according to a social media post by father Max Schachter.

In honor of his 14-year-old freshman son, Schachter wrote on a gofundme page that he was starting a scholarship fund "to help other students experience the joys of music as well as fund increased security at schools."

This is 14 year old Alex Schachter. I went to high school with his father. He died yesterday. My heart breaks for his family. I have no words. pic.twitter.com/oabXa3w2kx

Schentrup was a smart girl with a sweet smile.

In September, she was named one of 53 National Merit Scholarship Program semifinalists in the county and a classmate tweeted "we all praised for her intelligence."

Cousin Matt Brandow posted on Facebook that the 16-year-old visited Washington State recently and said she wanted to go to the University of Washington. He asked: you like the rain?

"She answers, I hate sweating in the humid Florida weather," Brandow wrote. "That's when I knew you were perfect for Washington."

A cousin, Aaron Chen, told the Miami Herald that Wang was last seen holding a door open so others could get away from the gunman.

Friends and relatives first thought Wang was just missing and checked with area hospitals. They later found out he had been killed.