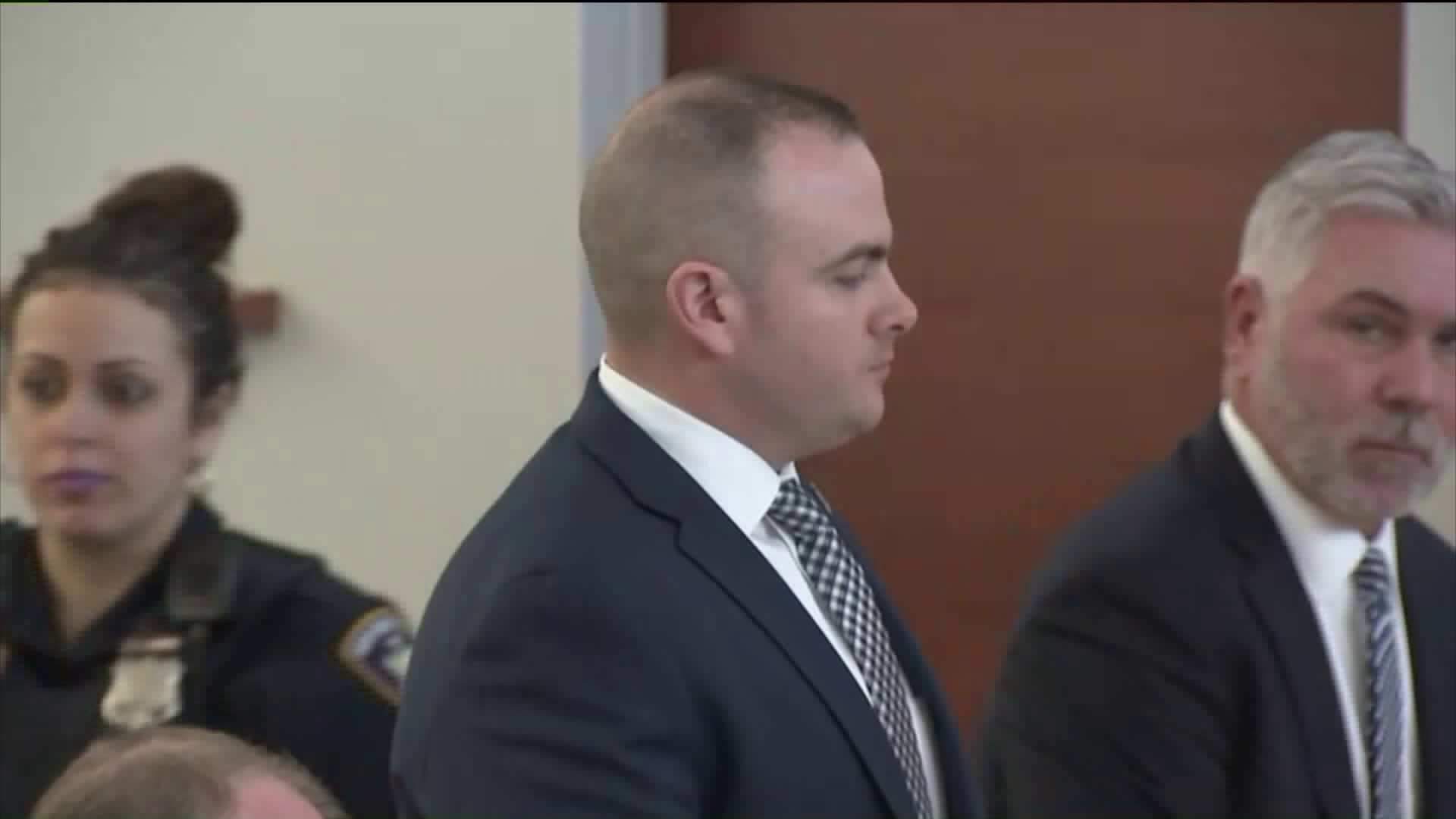 He`s a ten-year veteran NYPD officer. She was a 66 year-old diagnosed paranoid schizophrenic. He ended up killing her in what he claims was an act of self-defense. Prosecutors, however, call it homicide, and now Sgt. Hugh Barry is on trial on both murder and manslaughter charges in the shooting death of Deborah Danner.

CONCOURSE, the Bronx — He's a ten-year veteran NYPD officer. She was a 66 year-old diagnosed paranoid schizophrenic. He ended up killing her in what he claims was an act of self-defense. Prosecutors, however, call it homicide, and now Sgt. Hugh Barry is on trial on both murder and manslaughter charges in the shooting death of Deborah Danner.

Opening arguments were on Tuesday, and both the defendant and the victim had a lot of supporters on hand.

In Sgt. Barry's case, the dozens of officers who turned up were treated to a refreshments area in front of the courthouse, complete with banners draped over its railings emblazoned with the slogan "#WeAreBarry." It was also printed onto baseball caps that many of his supporters wore. It was all courtesy of the Sergeants' Benevolent Association, the union of which Sgt. Barry, and all NYPD sergeants, are members.

Danner had been an active member of a number of church groups. Dozens of their members were at court to show their support for her and for her family. The crowds were so big that court officers had to open not one, but two overflow courtrooms.

Opening arguments were made in the main courtroom before Judge Robert Neary, who will decide Barry's fate. There is no jury in his case.

"Despite all of his training, and all the resources available to Sgt. Barry," said Assistant District Attorney Newton Mendys in his opening argument, "he still failed during this encounter. He treated Danner like any other EDP," Mendys said, using the acronym for emotionally disturbed persons.

By contrast, Barry's lawyer, Andrew Quinn, argued that Barry "was trying to help this woman. He was trying to follow the mandates of the NYPD."

The shooting happened just before 6:30 p.m. on Oct. 18, 2016. Sgt. Barry had shown up to Danner's Castle Hill apartment to assist a handful of officers who were already on scene. It was the third time in recent years that police had been called to respond to Danner's home after she became loud, violent and in need of psychiatric help.

Danner had even written about the challenges schizophrenics face, in a six-page essay in 2012. It’s eerily ironic that she’d expressed in writing that she was afraid of dying at the hands of police because of her illness.

On the night of Oct. 18, 2016, Sgt. Barry rode up to Ms. Danner's seventh floor apartment in the elevator with her sister, Jennifer.

After arriving, Barry was able to convince Danner to put down a pair of scissors, prosecutors said. However, when he and another officer went to subdue Danner in her bedroom in order to get her to an ambulance and to psychiatric services. she pulled a baseball bat out from under her bed covers.

Despite repeated orders for her to drop the weapon, Danner did not. Prosecutors maintain that it was when the 233-pound, 5-foot, 7-inch tall woman took a swing at Barry that he shot her twice.

His attorneys have argued that Barry was trying to protect himself. Prosecutors say that he was overreacting.

"At the end of this trial, if Sgt. Barry is not justified, then he's guilty," assistant DA Mendys said.

Barry's lead attorney said his client was definitely justified, and that it was wrong for the prosecutor to assume otherwise.

"The Bronx District Attorney's Office is blaming Sgt. Barry for Deborah Danner's decision to arm herself with a weapon," Quinn told the judge.

Also speaking in the courtroom on Tuesday was Danner's sister, Jennifer. She took the stand to provide witness testimony, having been on scene as the situation unfolded.

She acknowledged that Barry did not seem aggressive or hostile on the tragic night. Her testimony also suggested, however, that Barry had acted rashly with her sister.

The three-week trial is regarded as having high importance beyond the courtroom by a variety of groups interested in the case.

"We are getting a lot of letters of support from across the nation," Ed Mullins, president of the Sergeants' Benevolent Association, said. "This case has a chilling effect across the nation."

Many jurisdictions nationwide allow officers to use deadly force when they're threatened with any weapon, including clubs or bats.

Leaders of some of the churches which Danner attended were on hand, calling for her case to serve as an example of a need for greater police training.

The bishop of New York has called on the mayor of New York to better train officers in handling EDPs, Rev. Matt Heyd, of the Church of Heavenly Rest, said outside of court.

Both of them are ministers in the Episcopal Diocese of New York, of which Danner had been an active member.

Verghese and Heyd said that officers are heavily challenged.

"There are 400 calls like Deborah's every day" by the NYPD, Heyd said.

Verghese added that a third of all NYPD officers have received training in how to best respond to mentally ill people.

"If all we have is the NYPD as our front lines, then they have to deal with mental health crises, or this becomes a tragedy for everyone involved," Verghese said.

Barry's trial is expected to run through mid-February. He is suspended from the NYPD, and could face a departmental trial after his criminal trial is concluded.