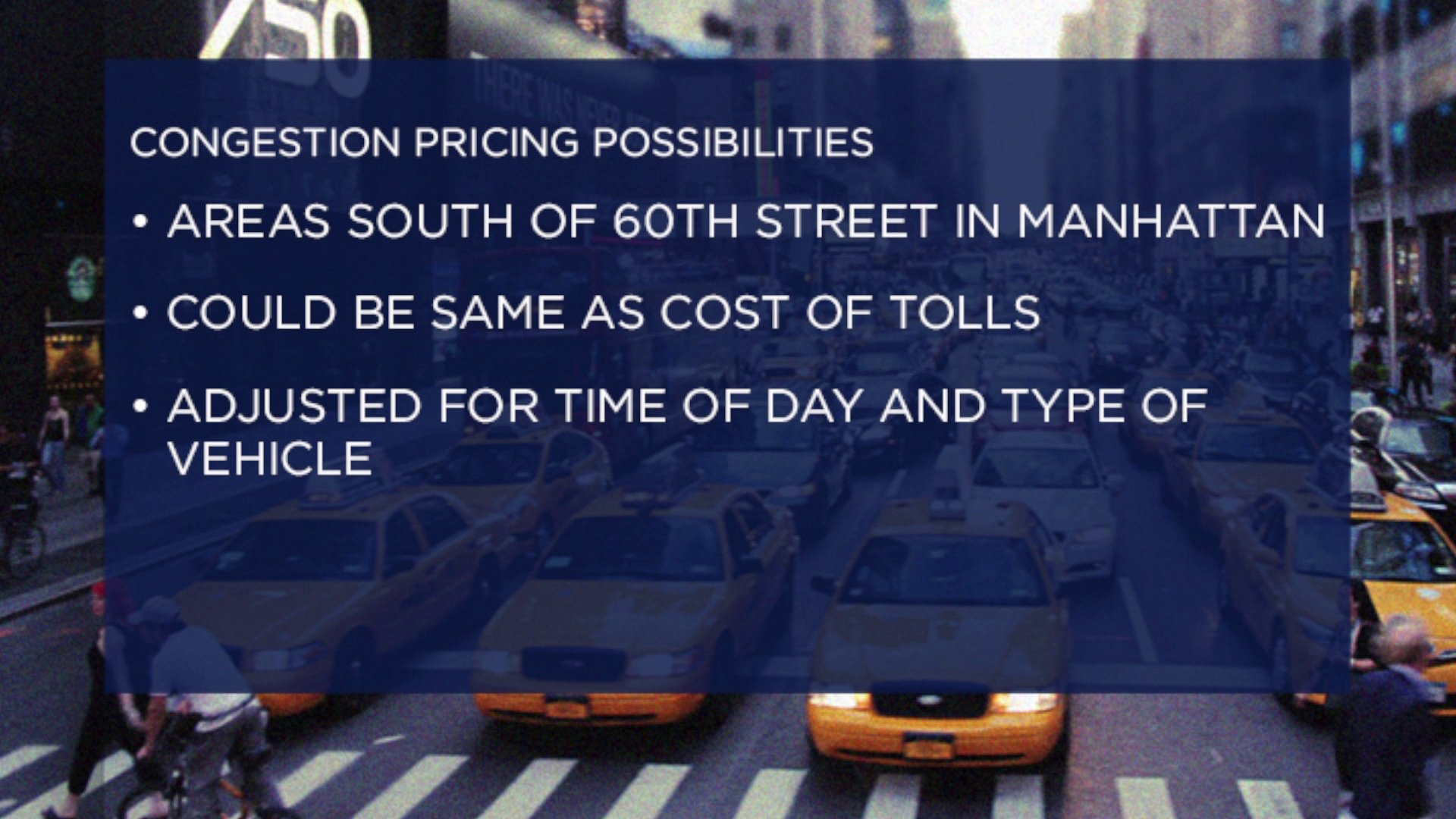 Will drivers have to pay to move around New York City south of 60th Street?

Can congestion pricing reduce traffic and generate a billion dollars for transit?

How much will it be?

These questions have been debated for decades in New York and new recommendations have added add new fuel to the discussion.

The Fix NYC report has been released with recommendations for the Governor Cuomo. He organized the group of business and transit leaders in October to come up with ideas.

The panel of business and transit leaders recommends the creation of a zone in Manhattan south of 60th Street. It would exclude the FDR Drive.

The panel suggests three phases. The first phase calls for more enforcement of traffic rules and improvements to the existing transit network. The second phase involves the car service and taxi charges and then, finally, the zones. The target for that is 2020.

Riders in taxis and for-hire-vehicles would pay an equal fee of a few dollars, which would be less than the pricing plan for other vehicles. Uber has indicated support for the plan.

Schwartz says the possible charge of $11.52  is a "placeholder" and it mirrors the current tolls to get into Manhattan.

The panel says it's job was to create a report for the Governor, who will review it and discuss it with lawmakers. It could become part of the 2019 New York State Budget.

"The report accurately points out that the objective is not to raise tolls entering the borough of Manhattan, but more specifically those trips adding to the congestion in a defined central business district," said Governor Andrew Cuomo in a statement.

"But, as a born and raised Queens boy, I have outer borough blood in my veins, and it is my priority that we keep costs down for hard working New Yorkers, and encourage use of mass transit. We must also find a way to reduce the costs for outer borough bridges in any plan ultimately passed," Cuomo said.

Representatives with Regional Plan Association and MoveNY plan to advocate for the proposal.

“The panel is right to recommend that we first start by investing in necessary transit improvements, especially in the outer boroughs," says said Nick Sifuentes, Executive Director of the Sri-State Transportation Campaign.

That group encourages an initial focus on buses and fixing surface-level transit.  The Long Island Rail Road is also a priority. The MTA reports that 24 major projects totaling $1 billion will be completed in 2018 along that railway.

"The status quo is no longer acceptable. It's time for transformative and critical change," says Fernando Ferrer, MTA Board Member and former Bronx Borough President. He references the  the Subway Action Plan, which has increased repair and maintenance projects.

London and Singapore already have similar charges in place.

Drivers call it a tax and NYC Mayor Bill de Blasio has said earlier plans could be a burden to drivers in Queens and Brooklyn and those who don't have access to transit options.

"Although I see some good elements in this new plan," Mayor de Blasio said in a radio interview, "I still think the millionaires tax should be the leading edge of how we solve the larger MTA problem."

Governor Cuomo, in a budget address, outlined a dedicated funding stream by calling for the existing "payroll-mobility tax" to be allocated for transit.