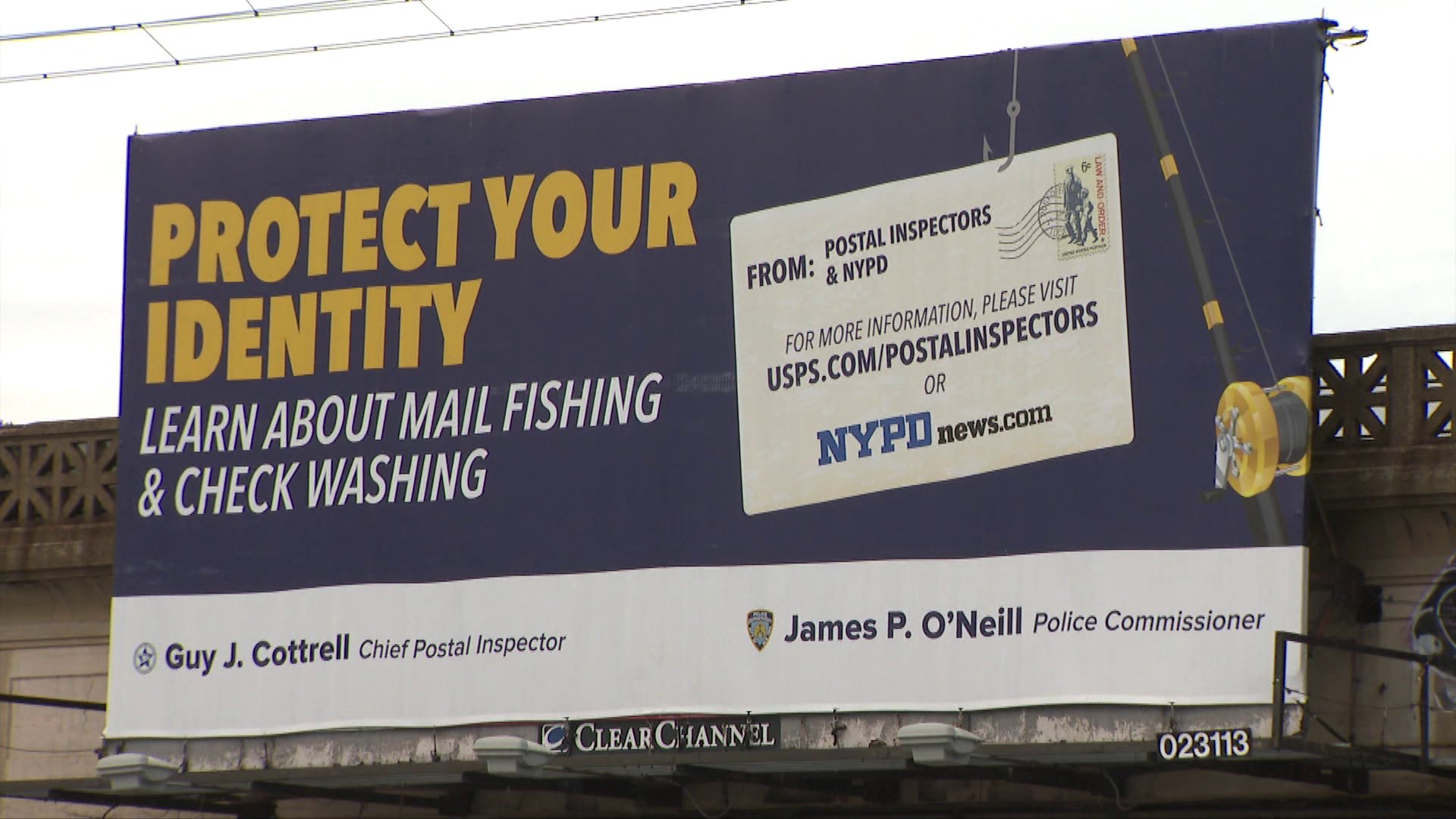 It`s a campaign that was launched by the police department`s Crime Prevention Bureau in conjunction with postal inspectors from the United States Postal Service. And it`s talking about an escalating problem many New Yorkers are not familiar with.

QUEENS — When the traffic gets bottlenecked during rush hour on Northern Boulevard and 55th Road in Woodside, NYPD Inspector Tom Conforti hopes drivers will notice the huge billboard attached to the Long Island Railroad trestle.

"Learn about Mail Fishing and Check Washing," the billboard tells all who pass by.

It's a campaign that was launched by the police department's Crime Prevention Bureau in conjunction with postal inspectors from the United States Postal Service. And it's talking about an escalating problem many New Yorkers are not familiar with.

"The longer your mail sits in a box, on the corner, the more susceptible it is," Inspector Conforti told PIX11.

Susceptible to fraud — and identity theft.

Kristin Kane, a prosecutor in the Economic Crimes Unit of the Queens District Attorney's office, explains what thieves do at mailboxes.

"They're literally fishing," Kane said. "They actually take a string and use a magnet or glue on the other end--and they're pulling out the mail...going through the envelopes, taking the checks, and washing them."

Thieves use a common household product to "wash" the ink off checks and then add their own payee. They often leave the check amounts for the same figure, because customers checking ATM balances may not be paying attention to other details.

"You don't realize you're the victim of a crime for at least 30 days," Inspector Conforti said, noting that bank statements arrive once a month.

Inspector Conforti said there's been a spike in mail fishing cases in Manhattan and a recurring problem in the Bronx. But it's happening all over the city, and Conforti has tips on how you can better protect yourself.

First off: make out your checks using a pen with permanent, or pigmented, ink. It costs about 15 cents more than a typical pen, but it can save you financial heartache.

"Using a pen with pigmented ink makes it extremely difficult for the ink to come off," Inspector Conforti told PIX11.

He also recommends that people deposit their mail in a postal service box very close to pickup time, so their cards and letters are not sitting there too long.

Depositing mail in a box on a Saturday night or Sunday is not a good idea, since the envelopes are sitting there until Monday.

Kristin Kane said if people want to better assure their check or gift card gets to the person it's supposed to, "I would recommend going into the post office to the window."

Kane said customers also have the option of handing their outgoing mail to the postal carrier, when he or she is making daily rounds.

Because this is the holiday season, law enforcement suggests we be extra vigilant with our mail, which is often filled with checks and gift certificates.

"They know that people are going to be sending out the Christmas cards, the holiday cards."