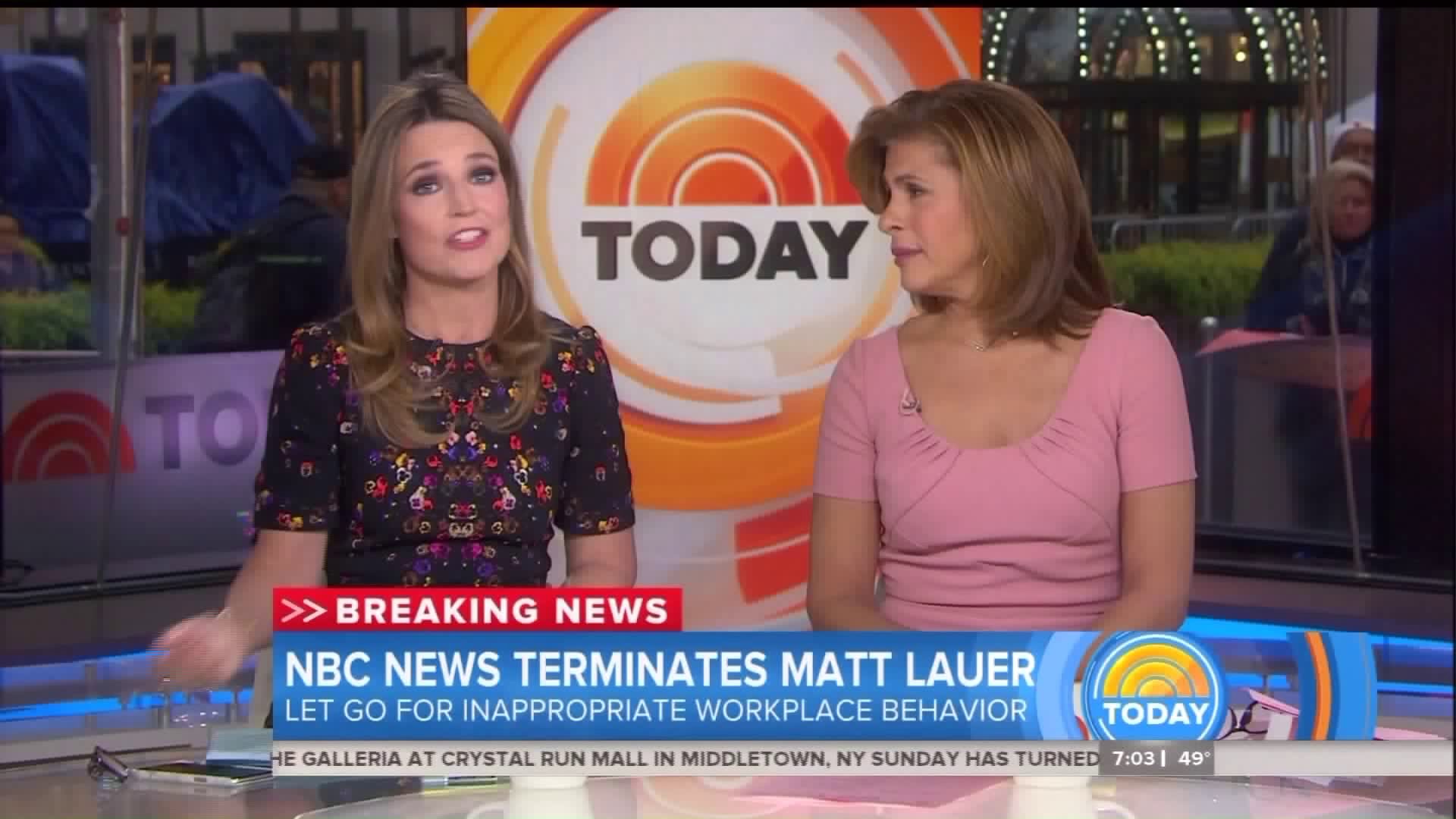 The "Today" show aired the memo on-air. It read:

On Monday night, we received a detailed complaint from a colleague about inappropriate sexual behavior in the workplace by Matt Lauer. It represented, after serious review, a clear violation of our company's standards. As a result we've decided to terminate his employment. While it is the first complain about his behavior in the over twenty years he's been at NBC News, we were also presented with reason to believe this may not have been an isolated incident. Our highest priority is to create a workplace environment where everyone feels safe and protected, and to ensure that any actions that run counter to our core values are met with consequences no matter who the offender. We are deeply saddened by this turn of events but we will face it together as a news organization — and do it in as transparent a manner as we can.

Savannah Guthrie made the announcement at the top of the "Today" show, where Lauer has been an anchor for two decades.

Hoda Kotb, on the set with Guthrie, said she has known Lauer for years and "loved him as a friend and a colleague."

"It's hard to reconcile the man who walks in everyday" with the person who was identified in the complaint, she said.

The "Today" show has since tweeted a clip of the announcement:

Matt Lauer has been terminated from NBC News. On Monday night, we received a detailed complaint from a colleague about inappropriate sexual behavior in the workplace by Matt Lauer. As a result, we’ve decided to terminate his employment. pic.twitter.com/1A3UAZpvPb

President Donald Trump has also tweeted about the firing:

Wow, Matt Lauer was just fired from NBC for “inappropriate sexual behavior in the workplace.” But when will the top executives at NBC & Comcast be fired for putting out so much Fake News. Check out Andy Lack’s past!

Within an hour of the announcement, Page Six reported sources allege Lauer sexually assaulted a female NBC staffer during the Rio Olympics.

Lauer's wife accused him of "cruel and inhumane” treatment when filing for a divorce in 2006, when she was pregnant with their third child. The complaint was later withdrawn, and the two reconciled.

Wednesday night, Lauer was set to co-host the annual lighting of the Rockefeller Center christmas tree.

The firing comes two months after a bombshell report by the New York Times accused movie producer Harvey Weinstein of sexual misconduct. Since the report, dozens of men in the media have faced similar allegations and often faced swift repercussions.

One week and one day before Lauer was fired, CBS News and PBS severed ties with Charlie Rose over sexual misconduct allegations.