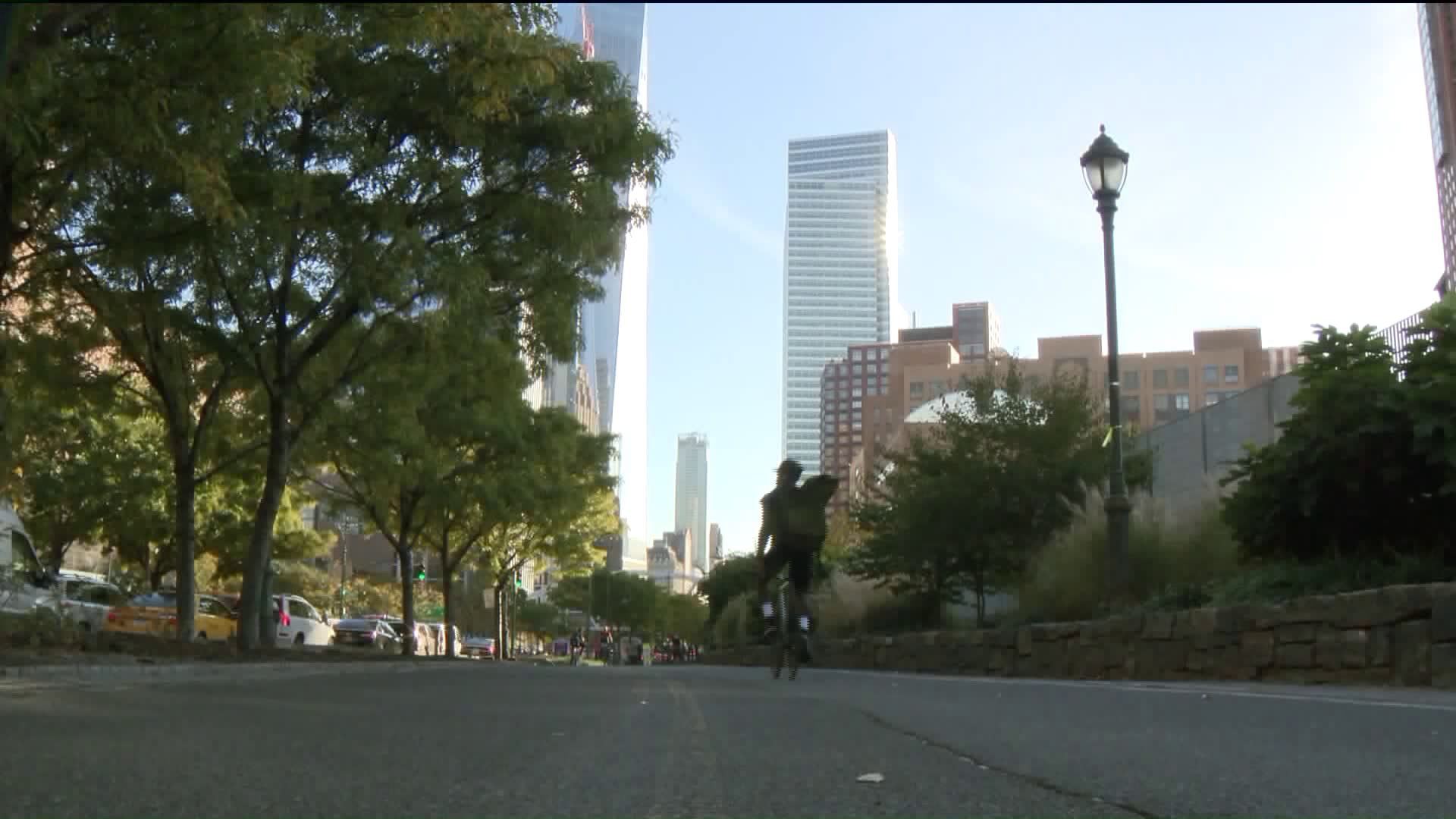 Sayfullo Saipov, 29, faces terrorism charges in the brutal attack that killed eight people and injured dozens when he mowed them down with a rental truck on a bike path near the World Trade Center.

LOWER MANHATTAN — Thursday was the first full day since the truck attack on Halloween that the West Side bike path was reopened to bicycles and pedestrians. However, a variety of scenes along the route showed that it is changed forever.

One of the permanent changes involves infrastructure. Mayor Bill de Blasio's chief spokesperson announced, via twitter  that the city would start installing jersey barriers and concrete cubes at entrances to the bike path from 57th Street down to Battery Park.

Another showing of how the path has changed was much more emotional. Local residents, dressed in black, walked the entire mile-long route of the attack, carrying flowers, and dropping their pedals every few steps, in tribute to the deceased and injured.

Yet another image continued the tale of the changes to the bike path. NYPD motor scooters were on patrol on the route, along with conventional NYPD bike patrols. The combined patrols ran every five minutes or so along the route where terror suspect Sayfullo Saipov mowed down eight cyclists and pedestrians on Tuesday afternoon.

"I appreciate the public recognition of the actions of myself and my fellow officers," Nash said on Wednesday evening in a prepared statement.

A day later, additional thankful comments were made, from another, related source. Some somberness accompanied those words, however.

At the Argentine consulate in Midtown, the national flag few at half staff. It was a tribute to the five Argentinian friends who were among the eight people Saipov mowed down.

The five men were Hernán Diego Mendoza, Diego Enrique Angelini, Alejandro Damián Pagnucco, Ariel Erlij and Hernán Ferruchi. They had been riding bikes on Tuesday to see the city as part of a celebration of the 30th anniversary of their high school graduation, when tragedy struck.

Some of their family members are now in New York to claim the bodies of their loved ones and to support the Argentinian and other survivors of the attack.

"Because of the courage they have," said Argentinian Adjunct Consul General Eduardo Almirantearena at a news conference Thursday morning, "because of the serenity, because of the unity they have between them, they are an example."

Also in New York,  hours after his boss, President Donald Trump, called for the death penalty for Saipov, Attorney General Jeff Sessions said in a prepared speech that the federal government will do everything in its power against terror suspects like Saipov.

"Terrorists should know this," Sessions warned. "This administration will use all lawful tools at our disposal, including prosecution in Article III [or, federal] courts or at Guantanamo Bay."

"If anyone has any doubt about it," the attorney general said. "They can ask the more than 500 criminals whom the Department of Justice has convicted of terrorism-related offenses since 9/11. And they can ask the dozens of enemy combatants in Guantanamo Bay."

It is not at all clear that prosecution can include the death penalty.

In response to the prospect of that, de Blasio said, "I'm not someone who believes in the death penalty generally. I'd rather see this man rot in prison for the rest of his life."