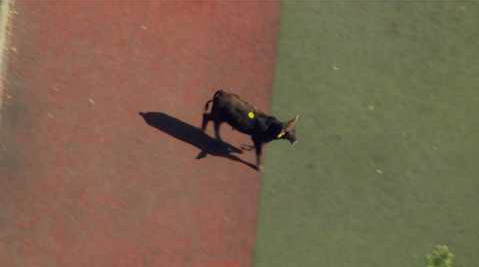 A runaway cow was captured in Brooklyn after running around ballfields in Prospect Park for at least two hours.

PROSPECT PARK, Brooklyn — A runaway cow was captured in Brooklyn Tuesday after evading authorities and running around ballfields in Prospect Park for at least two hours.

Crews were on the scene trying to wrangle the animal, which is tagged.

Police on the scene told PIX11 News the cow escaped from a nearby slaughterhouse and will now go to a sanctuary.

In February, a bull roamed the streets of Queens for about two hours before he was finally captured and died soon after.

Last year, a bull later named Frank escaped from a slaughterhouse and wandered onto CUNY York College campus before it was captured by officials. It taken to an Animal Care Center facility in Brooklyn, police said. Former Daily Show host Jon Stewart picked up the bull and transferred it to an animal safe haven in Watkins Glen, New York.

Have we named the Prospect Park Cow yet?

#HappeningNow A loose cow is being chased through Brooklyn pic.twitter.com/fL1UE6ags0

Please don't talk to me about anything besides the Prospect Park cow for the time being.