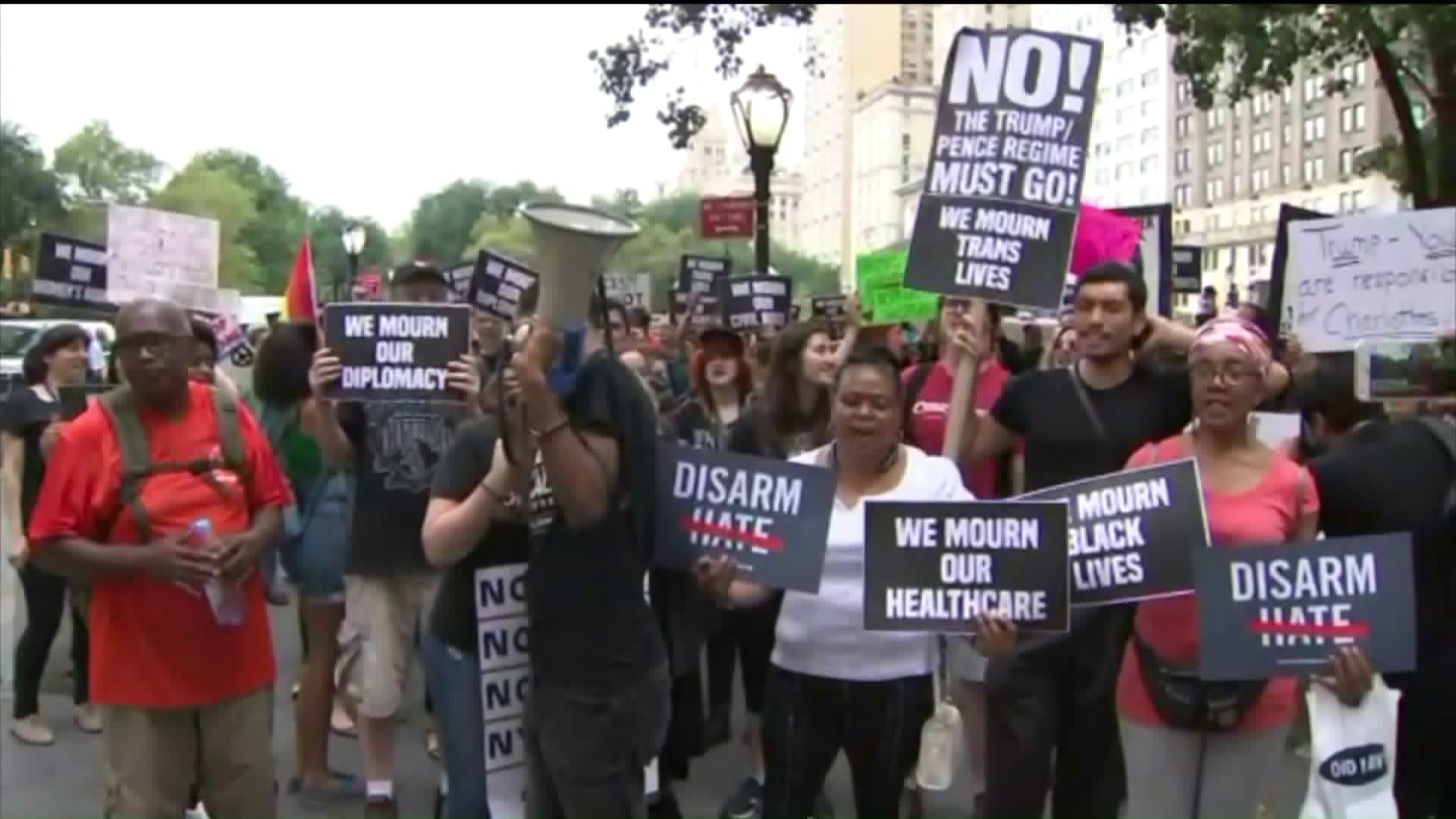 Hundreds of protesters returned to Trump Tower to voice their concern. 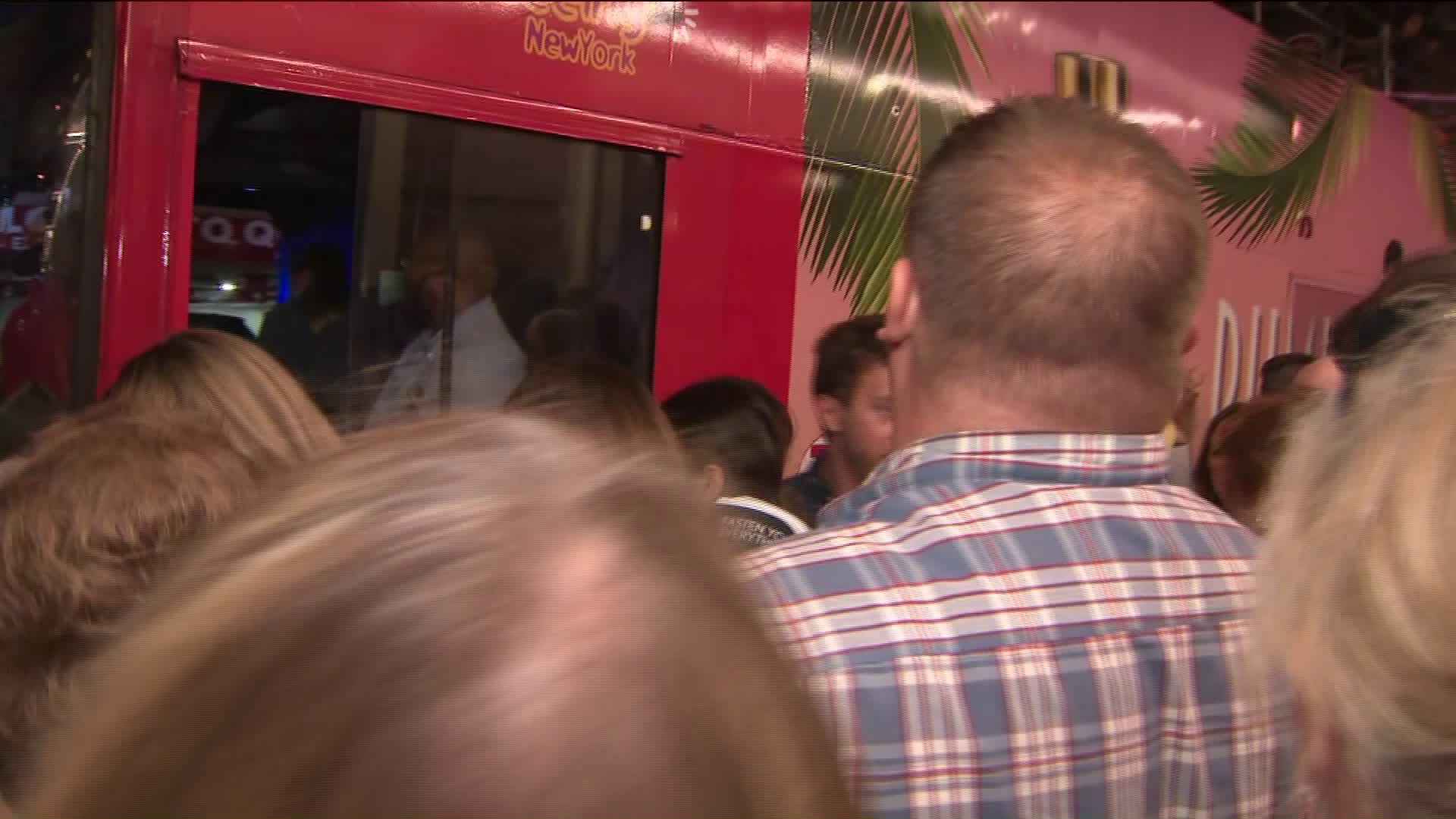 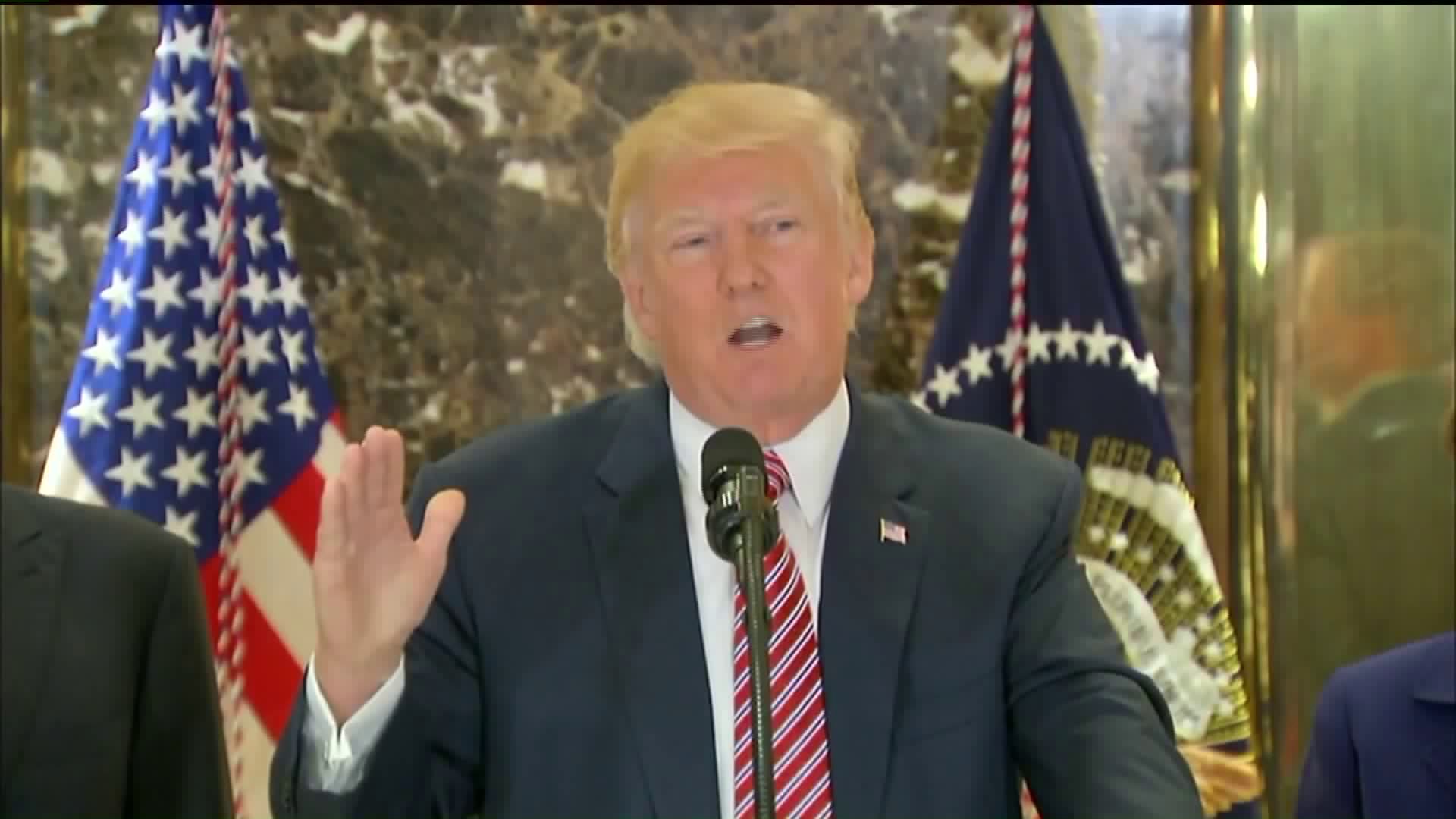 MIDTOWN, Manhattan — The reaction in the streets to President Donald Trump's news conference at Trump Tower was swift, strong, quite vocal and well-organized, even though many people chose to join protests suddenly, following the president's heated defense of his assessments of the deadly violence in Charlottesville last weekend.

NYPD officers ended up closing off multiple intersections along Fifth Avenue near the building which the president built and owns, on the avenue, at 56th Street.

In his news conference, in which President Trump raised his voice numerous times and interrupted reporters frequently, the president supported his initial comments he'd made in the wake of the violence in Charlottesville, Virginia last Saturday, in which he'd said there'd been displays of violence "on all sides," both by white supremacist protesters and counter demonstrators.

The clashes resulted in an admitted Nazi sympathizer running his car over counter demonstrators, killing Heather Heyer, 32, and injuring 19 others. The Dept. of Justice has determined that the attack qualifies as an act of domestic terrorism, and is being pursued as a civil rights case.

On Tuesday, though, President Trump stopped short of using the term himself. "I think the driver of the car is a disgrace to himself, his family and his country," the president said. "And that is -- you can call it terrorism."

"The driver of the car is a murderer," Trump continued. "And what he did was a horrible, horrible, inexcusable thing."

President Trump condemned white supremacists in the question-and-answer section of his news conference that had originally been intended to promote his executive order that would eliminate environmental impact studies for infrastructure development, but quickly got off topic.

"What about the alt-left that came charging at the -- as you say, the alt-right? Do they have any semblance of guilt?" the president asked a reporter at the news conference in the lobby of Trump Tower.

President Trump is now the subject of extensive criticism on social media for his comments that put George Washington, the most prominent founder of the nation, in the same breath as Robert E. Lee, who fought against the country as the commanding general of the Confederacy.

"If you were honest reporters," the president said, "which in many cases you're not, but many of those people were there [in Charlottesville] to protest the taking down of the statue of Robert E. Lee.

"So this week it's Robert E. Lee," continued the president, "I noticed that Stonewall Jackson's coming down. I wonder, is it George Washington next week? And is it Thomas Jefferson the week after? You know, you all -- you really do have to ask yourself, where does it stop?"

Outside of the late afternoon news conference, protesters started to gather. By 5 p.m., they numbered well into the hundreds. An hour later, they were so great in number that police had to open additional cordoned off areas to accommodate demonstrators. The numbers kept growing into the early evening.

"We are literally fighting Nazis," one demonstrator said to PIX11 News.

"Donald Trump can't be trusted," said another protester, Bill Johnson, of Staten Island. "That's not what I fought in Vietnam for."

There were a handful of demonstrators holding signs in support of the president, but they were far outnumbered, and stayed across the avenue from the anti-Trump protesters.

Another woman, Dianique Gilbert, pushed a cart among demonstrators and passers-by. She said that she was grateful to the president, but in an ironic way. Her cart was full of anti-Trump flags, buttons and pins.

"Trump said he'd create jobs," she told PIX11 News, "since he became president, my business is better than ever. Thank you Mr. President."

President Trump spends Tuesday night at Trump Tower, and is scheduled to leave the city on Wednesday.