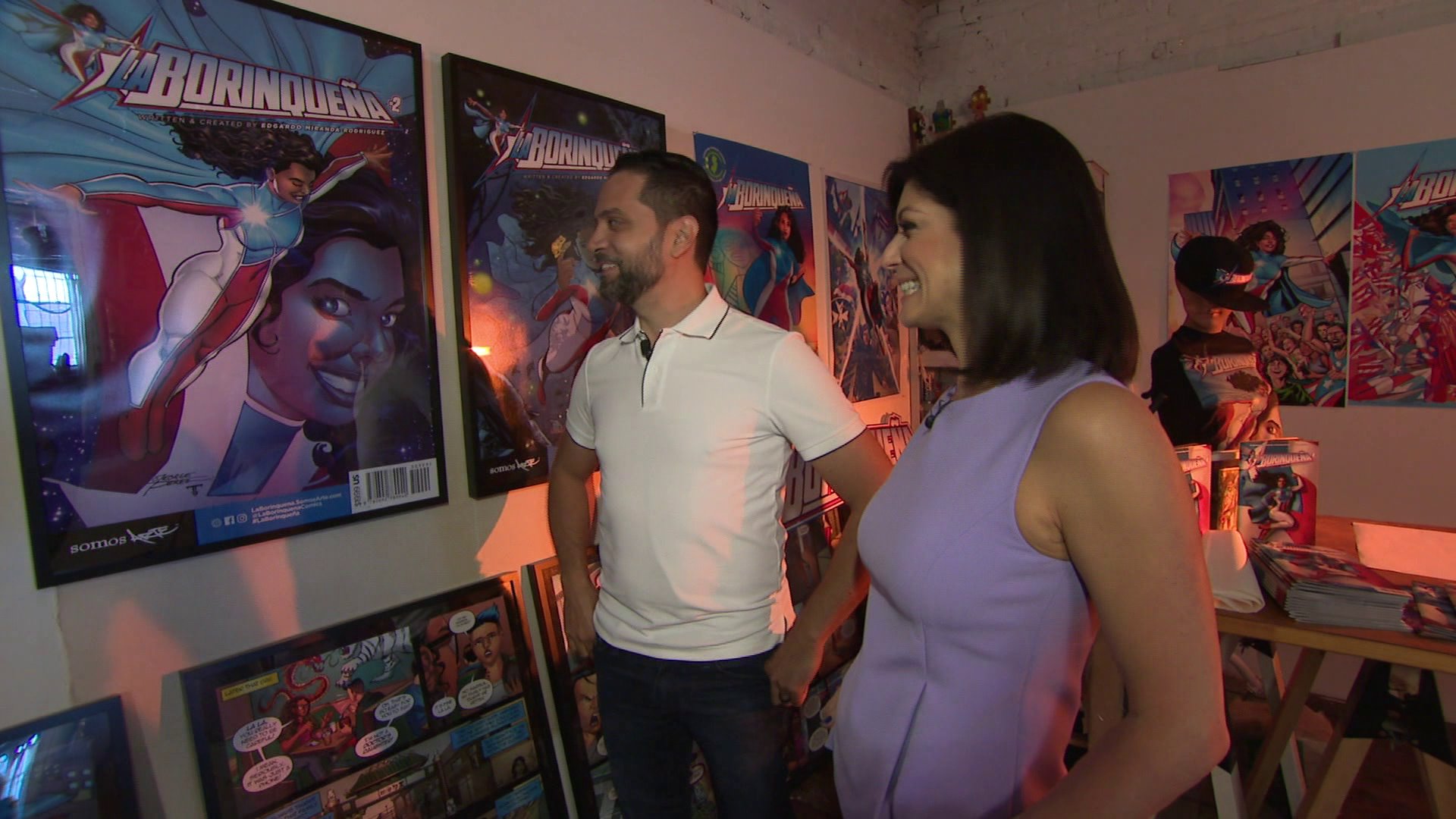 Tamsen Fadal visits Somos Arte studio to share how one Brooklyn-based graphic designer is giving a voice to millions of Americans.

WILLIAMSBURG, Brooklyn- He's changing the conversation one comic book at a time. From writing for Marvel to launching his own creative arts studio, Somos Arte, Edgardo Miranda-Rodriguez knows the power of a story. I sat down with the Brooklyn-based graphic designer to see how is work is giving a voice to millions of americans.

“I thought what if I could create a hero that is actually grounded in reality and actually addressing real world social issues," Edgardo Miranda-Rodriguez said. It’s a comic book with a conscience and the brainchild of Edgardo Miranda-Rodriguez. “I’ve always been invested and aware about certain issues affecting Puerto Rico particularly with the debt crisis and environmental issues affecting the island," he explained.

So he decided to act through his art by  designing a one of a kind female superhero . “I actually did the cape to mirror and mimic the wave motion as well," he described while showing us his sketch. “La Borinqueña literally translates into Puerto Rican woman," he said. “Growing up all the heroes in my life were women: my mother, my cousin, my mentors."

Which was why it was crucial that this heroine looked like, well real. “I think that’s why so many people are drawn to the character, not just Latinas but all people," he added. The stories were always an escape for him growing up in the South Bronx with his two siblings and mom. “Sometimes we didn’t even have enough money for food," he remembered. "So I’d collect bottles and cans and exchange it for nickels and dimes that I would use to buy my comic books.”

As he got older, Edgardo began embracing and advocating for his own culture, and, this year is a pivotal one for his cause. "This is the 100th anniversary of the Jones-Shafroth Act which gave Puerto Ricans our American citizenship," he said. "Some Americans are actually thinking that Puerto Ricans moving to the United States is an immigration problem." His purpose is to educate from his comics to the classroom to the community. “I do my best to give back and to remind people that they actually have the potential to go beyond their reality at that moment."

He's also collaborated with other well-known artists, like rapper DMC and Lin Manuel-Miranda, designing the cover art for the 'Hamilton Mixtape.' “We’re not related," he laughed. "He’s a great guy though and what I also love about him is that he’s truly dedicated to Puerto Rico." While Edgardo is the mastermind behind La Borinqueña, he says it’s truly been a team effort. He’s only published one issue, with the second on the way.  And you, never know, the big screen may be next. “Who’s playing the character?" I asked. "I don't know," he laughed. "She’s young and agile so maybe Laurie Hernandez!"

You can get your hands on his groundbreaking comic book at Forbidden Planet, here in Manhattan.