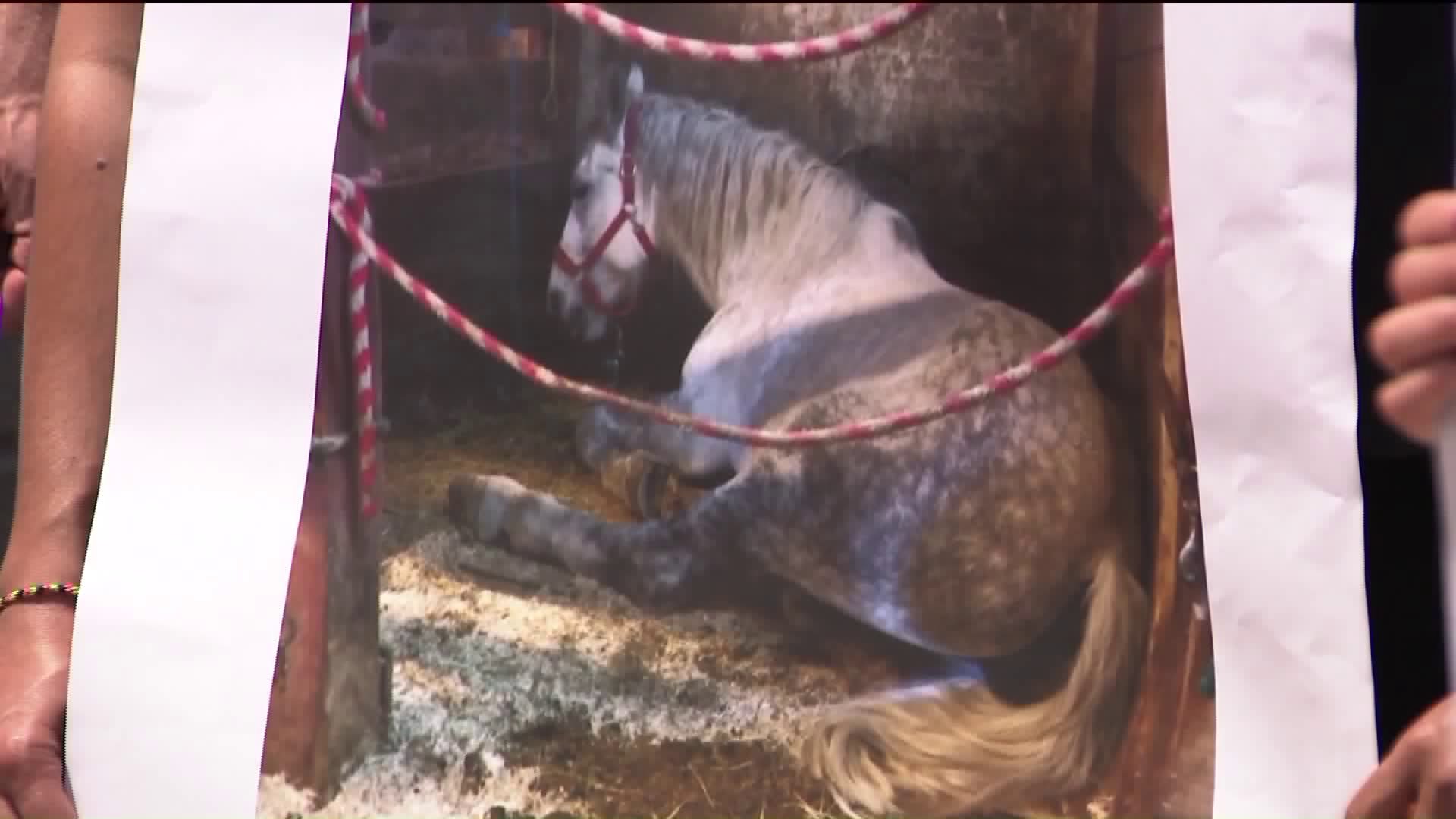 They allege the animals are being kept in unhealthy conditions.

MIDTOWN, Manhattan — Animal rights activists held a rally Friday morning outside one of the city’s four stables for carriage horses, protesting what they describe as unhealthy living conditions for the horses.

The advocates are calling on the Department of Health to investigate.

Horse-drawn carriage rides have long been an iconic tradition for visitors to New York City. But their very existence is at the center of this battle. Recent high-profile incidents of horses getting loose in midtown have animal activists sounding the alarm.

On May 15, two horses were on their way to Central Park when something spooked one of them on Eighth Avenue near 55th Street. Surveillance video capture Billy backpedaling in the middle of the street during rush hour, eventually falling onto a yellow cab.

Then on Tuesday, another carriage horse, Goldie, bolted from her West 52nd Street stable and galloped several blocks before being corralled by police.

“Agencies like the Department of Health are literally asleep on the job. They're not investigating the current conditions in place and the result is horses are living in squalid conditions," said Jill Carnegie with advocacy group NYCLASS.

"Stalls that are far too small for their well-being and we have three horses literally involved in running wild in Midtown during rush hour traffic just in the past month. This is an out of control industry and the Department of Health needs to begin working on enforcement on the regulations that are currently on the books."

The New York Post on Thursday published a photo of a horse named Sophia given to them by a so-called whistleblower trying to draw attention to filthy conditions. NYCLASS led a protest Friday outside the West 38th Street stables where the photo was taken.

A representative for the Historic Horse-Drawn Carriages of Central Park, LLC. disputes the claims of neglect, abuse and unsanitary conditions.

"They were just inspected and there can be surprise inspections," Christina Hansen said.

Hansen said a large horse like Sophia, who is 1,800 pounds, can produce 60 to 80 pounds of manure per day and may excrete every half hour. She adds the 9-by-10 foot stall is normal size.

Hansen gave PIX11 a tour inside the stables to show us the conditions.

The Department of Health told PIX11 News the stables on West 38th Street was inspected three weeks ago and the size of the stalls meet city regulations. Inspectors also found the stalls were cleaned properly.

"I think all of the stables are hellish but even if they weren’t our position is that the horses lives are misery whether they're pulling carriages through traffic or kept in these tiny cages with no access to pasture," Birnkrant said.

Moving forward, NYCLASS is hoping for a one-on-one meeting with the Department of Health to discuss ways to improve the overall quality of life of carriage horses.