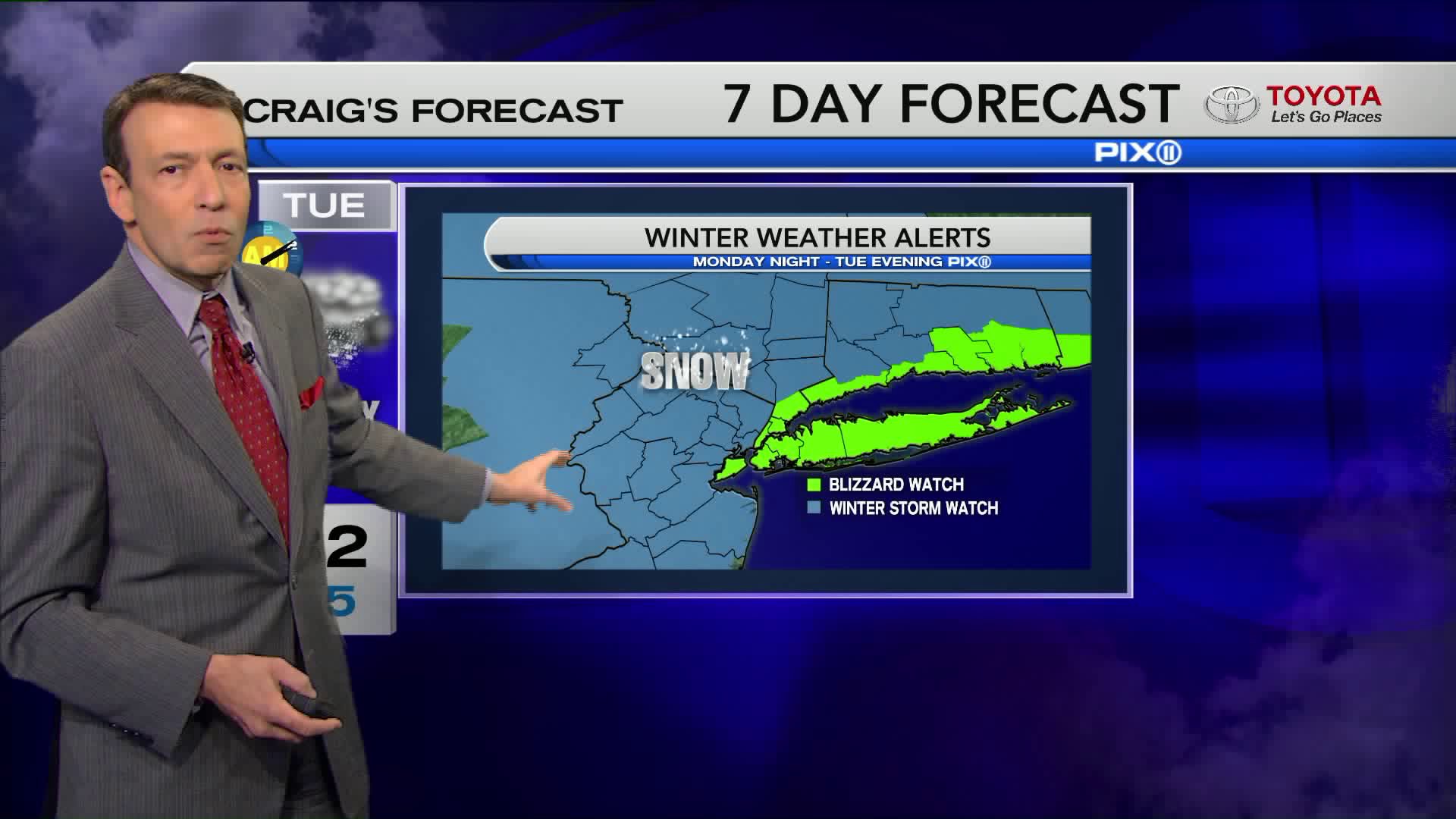 The National Weather Service has issued a blizzard watch for many parts of the tri-state area. Craig Allen breaks down where you can expect to see the most snow.

NEW YORK – The sunny days and T-shirt wearing temperatures made it seem like winter was over, but it's not finished yet as a major storm could bring up to a foot of snow and strong winds early next week.

The National Weather Service has issued a blizzard watch for a major snowstorm due to arrive in parts of our area late Monday into Tuesday. The winter storm is expected to bring strong and gusty winds, with snow accumulations between 12 and 18 inches for New York City, Long Island, southern Westchester, southern Fairfield, southern New Haven, Middlesex and New London counties. The watch officially begins midnight Tuesday. There also is a winter storm watch for a larger area that includes much of New Jersey, Pennsylvania, upstate New York and New England.

The severe weather comes just a week after the region saw temperatures climb into the 60s in what looked like a sign of balmy spring.

It's another unseasonably cold night Saturday and it will remain cold through the weekend with temperatures struggling to get to the freezing mark on Sunday. Monday should be decent as well as the sun gives way to increasing clouds but it will be dry through the day.

Monday and night and Tuesday will see a “significant” amount of snow, however, we're still not certain about how significant it can get. The NWS has officially hoisted a
Winter Storm Watch for all inland areas and a Blizzard Watch at this early juncture for NYC and coastal regions. We're watching to see if this all comes together just right. If it is upgraded to a warning, then we really begin to worry.

All weather maps are indicating we are in for a storm developing late Monday night and lasting through Tuesday night. It has the makings of a strong coastal storm, and all the potential to become a full fledged nor’easter.

This storm will require three ingredients to get together at the perfect time. Gulf moisture, a cold injection of energy from Canada and a Pacific storm sending its energy eastward to meet up.In the world of meteorology, it’s like threading a needle, but when it does happen, that’s how you get memorable storms. All those pieces have to get together at just the right time. We’re pretty certain these systems will form into one big one along the mid Atlantic coast but the track from there will be very critical.

If it then takes a perfect path to about 100 miles off Long Island, then snow lovers will rejoice with the biggest snowfall of the season. Perhaps a foot or two with gale force winds
and blowing and drifting snow. Most maps are showing this track. However, a few other models are indicating a more northward track, up the coast which would carry warmer air
into our region so the snow would change to rain for several hours and knock back the accumulations substantially. There is also still a small chance that the track could be farther south and east and only fringe our area with a plowable but much more manageable snow. However, that is the least likely scenario right now.

PIX11 will keep you updated as new information keeps coming in. For now, just be alert to the possibility of needing to change plans for the first few days of this upcoming week.
It will give you a chance to sit back and wonder what happened to all that lovely out of season spring weather we enjoyed.