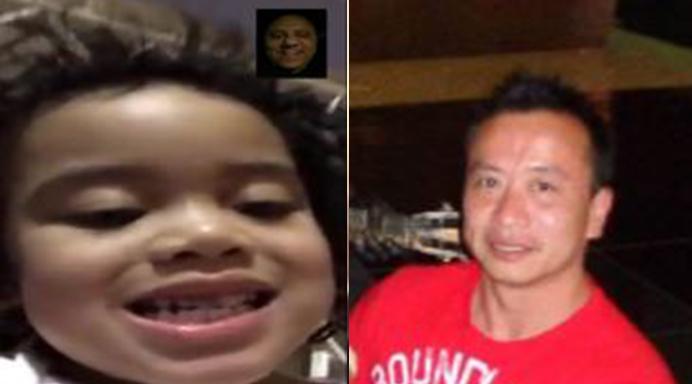 Johnny Woo allegedly took his 2-year-old daughter after getting into a fight with the girl's mom on Feb. 7, 2017.

STATEN ISLAND, N.Y. — A 2-year-old girl and her father have been found Tuesday afternoon, hours after state police named the pair as the subjects of an Amber Alert, authorities said.

Johnny Woo and his daughter Kim Woo were located on the Major Deegan Expressway, officials said. A law enforcement source told PIX11 News both are unharmed and the father is in custody.

He was charged with assault and harassment.

An Amber Alert was issued for the pair, announcing that Woo was likely traveling in a black 2014 Kia Sorrenta with New York license plate GHH-8886. State police said they believed he would be going to the Bronx.

It was in the Bronx that two civilians -- a father and his son -- spotted Woo's car and waved down NYPD school safety agents who then called for NYPD highway patrol and the suspect was nabbed.

The search for the pair lasted about six hours, during which time cellphones throughout the five boroughs pinged loudly with emergency notifications publicizing the Amber Alert.

One of those notifications went to the cellphone of Leandro, whose last name was not shared, according to the Sergeants Benevolent Association. Leandro was in the passenger seat of his father's car when he saw the alert.

"When the two looked over at the car next to them, they realized it was the car in the alert," the SBA wrote.

Shortly before 9 a.m., Johnny Woo and the girl's mother, who is an NYPD sergeant, fought at a home on Ismay Street in Staten Island. Police said the couple is in the process of getting a divorce.

Woo allegedly punched the girl's mother in the stomach, took the keys to her car and grabbed the car seat with the child, still wearing her pajamas, and left, a police source told PIX11 News. The mother was taken to a hospital for treatment.

The circumstances of that incident made police believe Kim Woo, who is a month shy of 3 years old, was in "imminent danger."