Over 10,000 fill Battery Park for day 2 of protests against Trump’s executive order 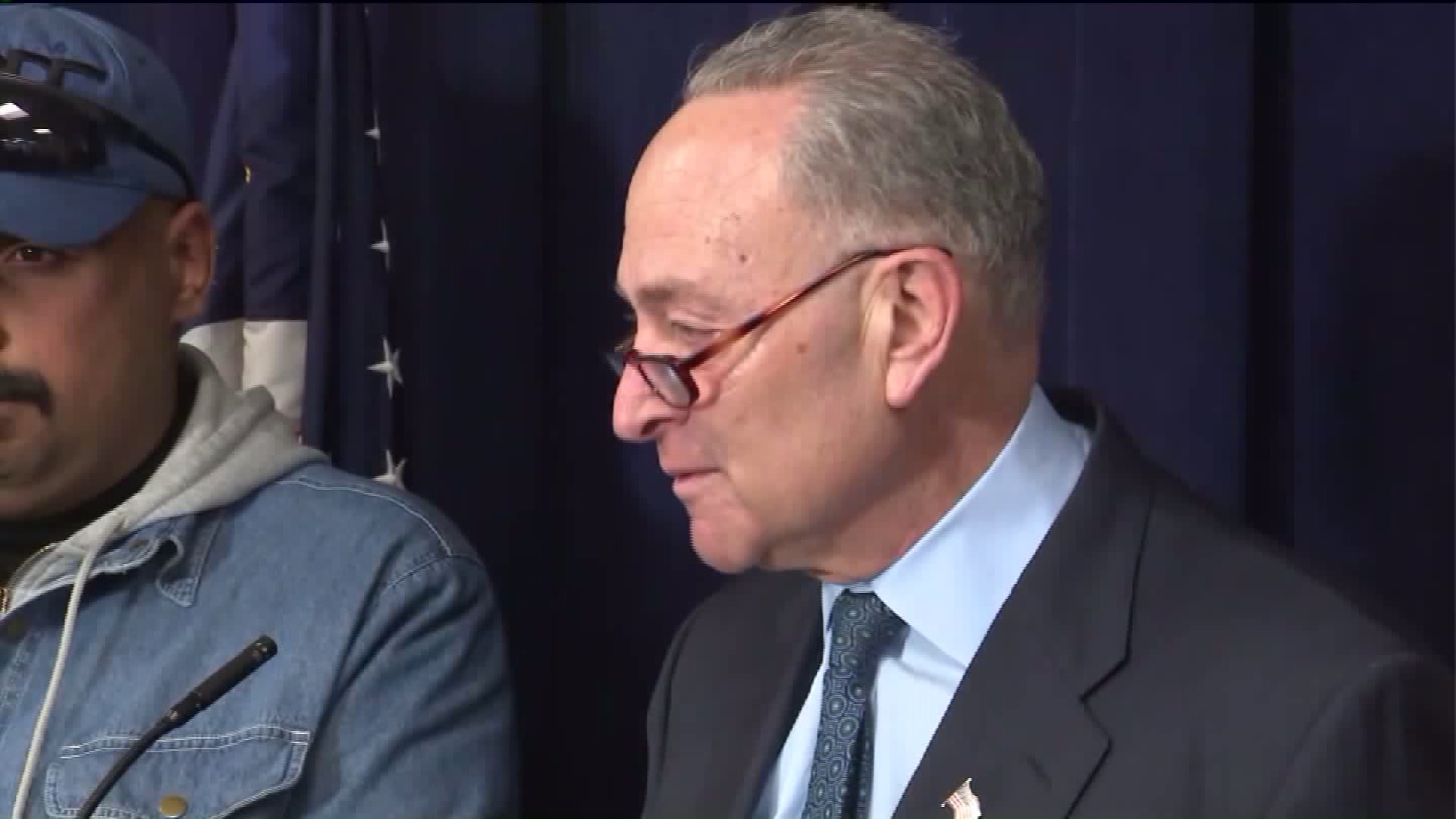 Schumer, with tears in his eyes, vowed to do everything he can to overturn the executive order. 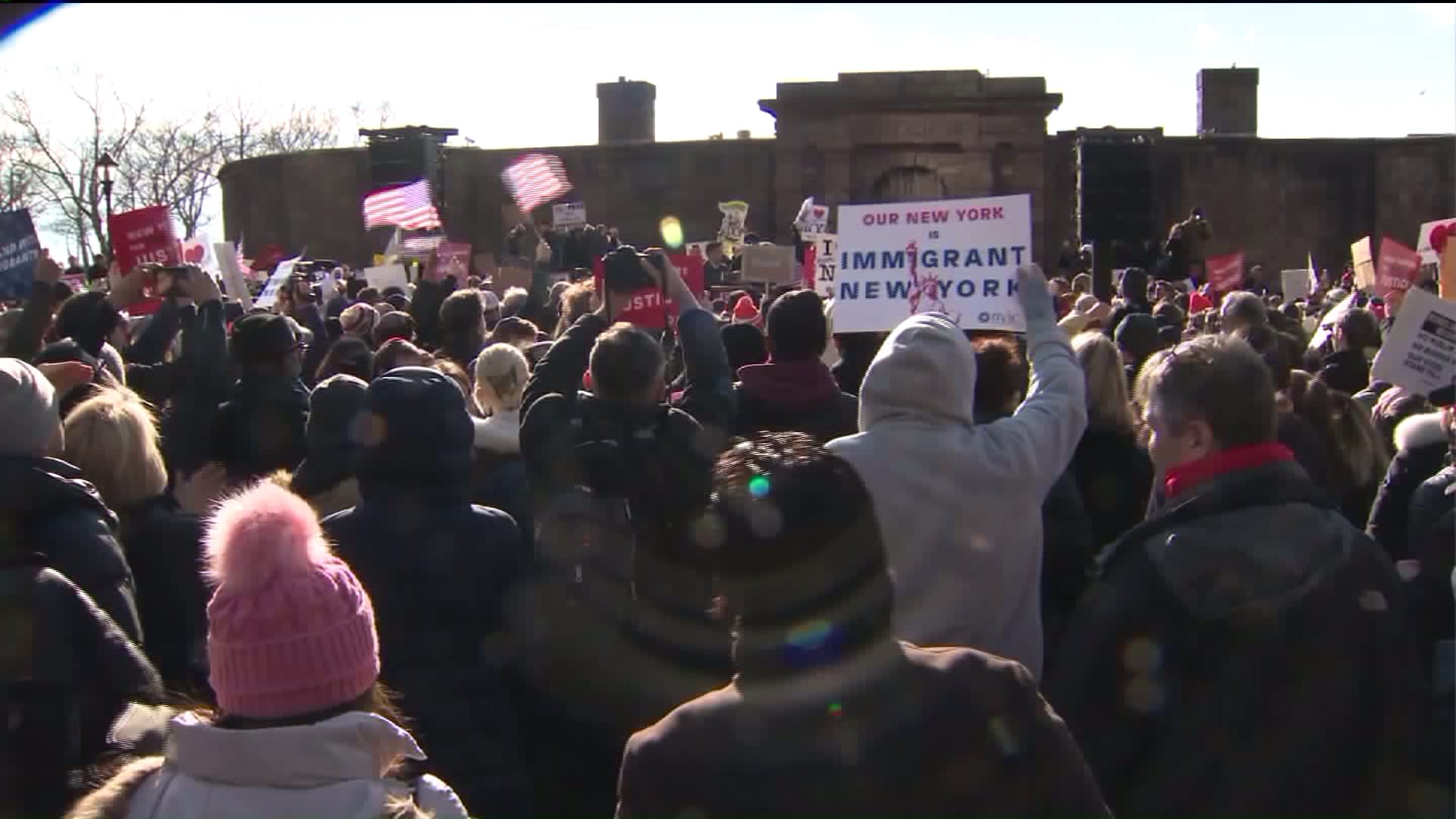 People gathered about 2 p.m. Sunday at the west side of Castle Clinton National Monument. Protesters, amounting to well over 10,000, held up "Fire Donald Trump" and "No ban, no wall" signs and made their way toward the massive crowd. One couple told PIX11 News they weren't able to make it to JFK on Saturday but was attending the rally at Battery Park with their children and grandchildren.

"It's intolerable what Donald Trump is doing. He is creating a fascist nation in what he has done in seven days, and we are here representing what America is all about," another protester said at Battery Park while holding up a sign that read, "Welcome Refugees! End the ban! Welcome immigrants! No border."

"We got to get along. We need to include. We need to give people a chance," another man said.

Inspired and empowered by the emergency protest at JFK Airport from the day before, organizers revved up the crowd with chants and speeches.

"New Yorkers, you guys are leading the fight nationally with what you did at JFK yesterday," an organizer said from the stage.

With tears in his eyes, Schumer called the action "mean-spirited and un-American" in the news conference before the protest.

"It was implemented in a way that created chaos and confusion across the country and it will only serve to embolden and inspire those around the globe who will do us harm," Schumer said.

Sen. Cory Booker said Americans must not "luxuriate" in the freedoms they've been given. Instead, they need to fight for them.

"Every generation of Americans must prove worthy of the fights and the struggles and the battles that came before," Sen. Cory Booker told protesters Saturday.

He said Americans must let the politicians know that "the power of the people is greater than the people in power."

.@CoryBooker at rally against Trump's executive order, "The power of the people is greater than the people in power" #BatteryPark pic.twitter.com/gRrkCOZTL6

Sen. Kirsten Gillibrand and Reps. Nydia Velazquez and Jerry Nadler, who were both at JFK Airport Saturday, spoke at the protest. Celebrities such as Chelsea Clinton and Jennifer Lopez were among the people in the crowd.

Honestly I feel like we are in a nightmare right now!! In a country founded by immigrants how did immigrant become a bad word!!! #nobannowall #unitedwestand #nomuslimban #sayingnothingissayingsomething #standup #loveistheanswer

More than 10,000 people then marched to 26 Federal Plaza where the U.S. Customs and Border Protection office was located.

Seven people were released Saturday night with help from ACLU lawyers. Among them were two Iraqi refugees whose lawyers filed a motion earlier that day to have them released. The refugees, who both have U.S. visas, were detained late Friday night when Trump's executive order went into effect.

The organizations are calling for the end of Trump's executive order that bans refugees from entering the U.S. for 120 days and ones coming from war-torn Syria indefinitely. Citizens from seven Muslim-majority countries — Iran, Iraq, Libya, Somalia, Sudan, Syria and Yemen — are refused entry to the U.S. for 90 days.

On Saturday night, a federal judge in Brooklyn granted an emergency, nationwide stay preventing deportation of immigrants detained at U.S. airports and citizens from certain Muslim-majority countries already in transit to America.

Though this was a small victory, it still leaves the executive order in place for people who plan to come. Organizations part of the march are demanding a permanent end.

Thousands filled JFK Airport's Terminal 4 speaking out against the travel ban. The emergency protest began at 11 a.m. outside the international arrivals area of the terminal, but quickly grew to thousands. The AirTrain was suspended for crowd control, but Gov. Andrew Cuomo later lifted the order.

"The people of New York will have their voices heard," Cuomo said.

Organizations such as the New York Taxi Workers Alliance stood with demonstrators, chanting, "No hate, no fear. Immigrants are welcomed here!" as refugees who arrived at the airport Friday night remained in detention.

For those needing legal assistance during this immigration ban, or those looking to volunteer, visit this link: http://signup.com/go/wSrwqJ or NoBanUSA.com.