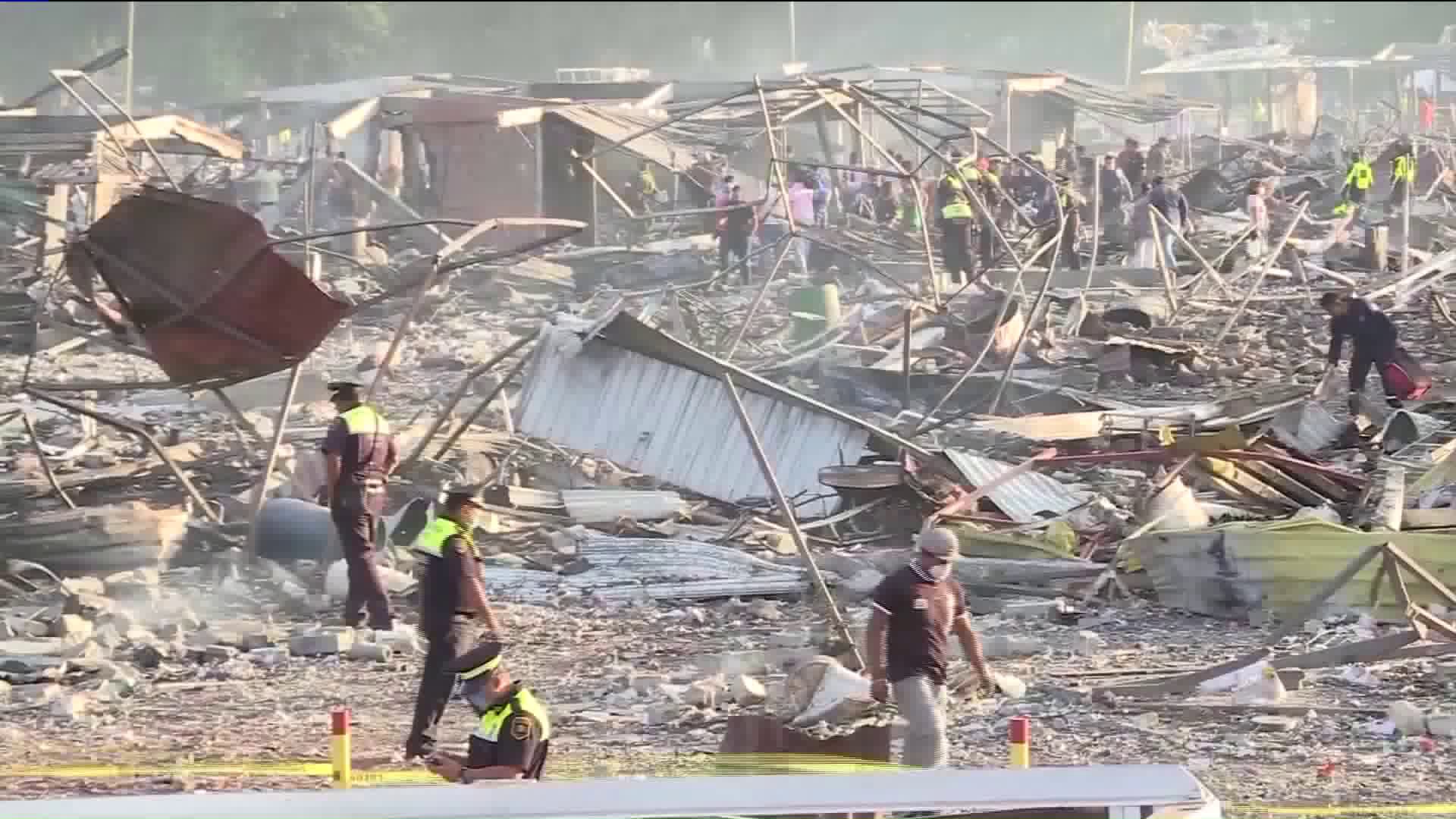 TULTEPEC, Mexico — At least 32 people were killed and dozens more were injured in a massive series of explosions Tuesday at San Pablito market north of Mexico City, officials said.

The deadly blasts sent huge plumes of smoke billowing into the sky and shook the ground in neighboring towns.

People in neighboring towns reported that they could feel the ground tremble beneath their feet as fireworks stalls exploded in Tultepec, about 40 kilometers (25 miles) north of Mexico City.

The series of blasts sent huge plumes of smoke billowing into the sky.

"I have a family member who works here but I have not heard from him," she said.

Seventy-two people were injured, said Eruviel Avila, governor of the State of Mexico. Three minors are expected to be transferred to a hospital in Galveston, Texas, for treatment for extreme burns.

The town is known for its pyrotechnics industry and the huge San Pablito market is popular for fireworks sales. The market would have been especially crowded heading into the holidays as locals shopped for fireworks to mark Christmas and New Year celebrations.

The cause of the explosion was not immediately known.

Holding up his cellphone to show a picture, a man standing alongside his family said that his niece's boyfriend still is missing.

"They haven't been able to identify him because he didn't have his ID. We've called the clinic and hospitals and they have not been able to give us any information," he told CNN en Español.

The family is sure he was at the market because his niece had spoken to him and he'd mentioned he was at a stall. "I tried to call and call but he never responded," she said.

Her mom, Paulina, was with her when they heard the explosions.

The family has lived in Tultepec their entire lives and this is not the first time that the market has seen a situation like this.

"We have had occurrences before," said Paulina, "but not of this magnitude."

Authorities are trying to assist people in locating their loved ones.

Another man, who spoke with CNN en Español said he was visiting his children when they all went to the market to buy fireworks.

His kids went one way; he and his granddaughter went another route. When he heard the explosion, he ran looking for his loved ones. He found them all, except for one, the baby. Soon, panic set in.

"We have called the ambulance, the Red Cross and no one has any information," he said as he wept. "No one knows anything."

Witnesses told CNN that people ran for their lives as video captured flashes of fire and what appeared to be fireworks exploding. The death toll climbed throughout the evening.

Luis Tolentino said he was in traffic when he heard loud noises. Some of the people who tried to get away tripped in the frantic dash, he said. A video from Red Cross Mexico showed the panic as people ran from the devastation.

The area is densely populated and witnesses from surrounding neighborhoods captured the huge volume of smoke that billowed into the sky.

Fireworks accidents are common in Mexico — even more so at the end of the year and during religious festivals, according to a report by Mexico's National Pedagogic University.

An explosion at the same fireworks market in 2005 injured a large number of people and caused enormous damage.