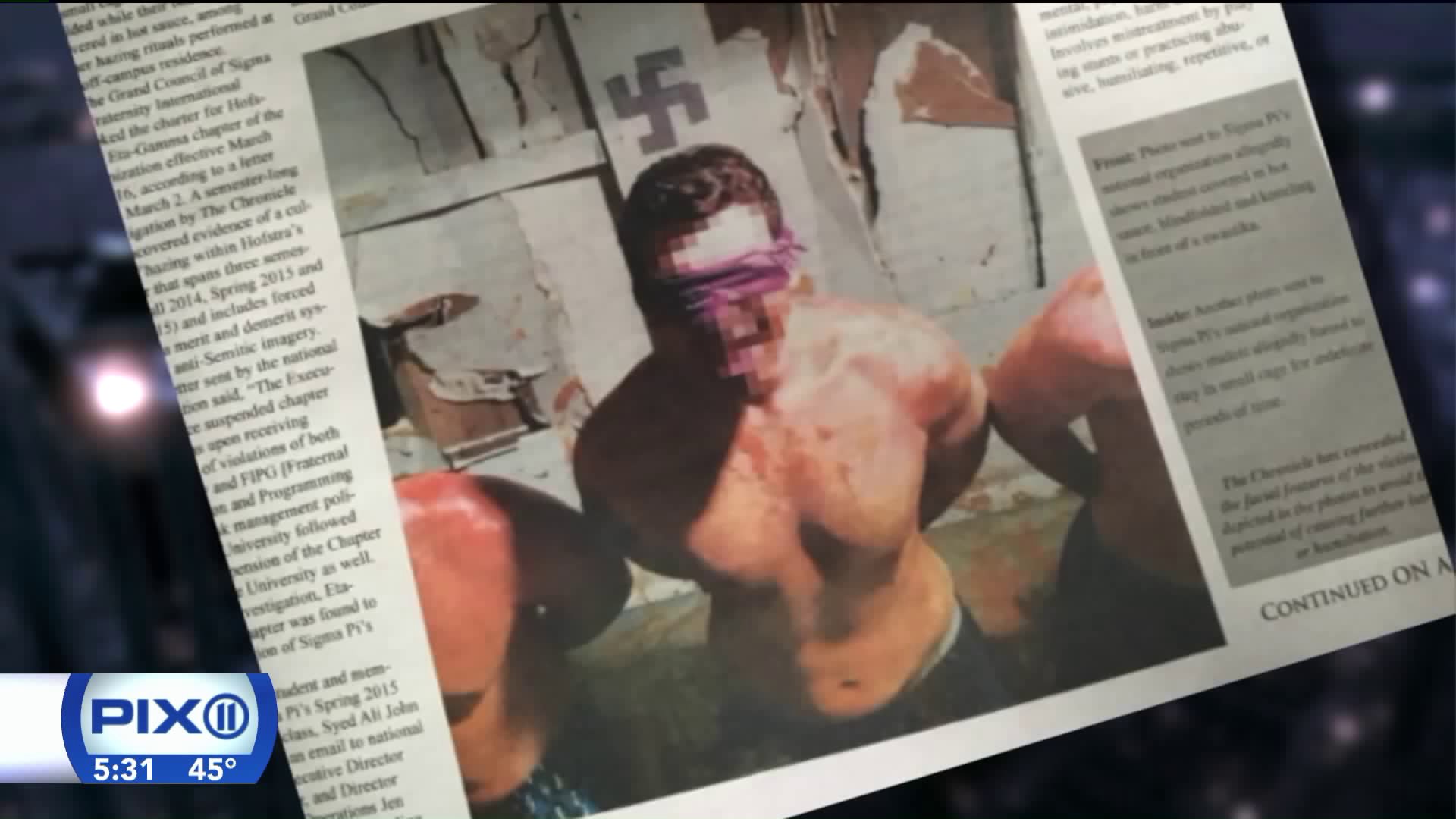 HEMPSTEAD, N.Y. -- A young man kept locked up in a tiny cage; anti-Semitic symbols on the wall behind people who'd been rubbed down with intensely potent hot sauce; men forced to lie on their backs in a basement while an unknown substance was sprayed over them.

They're all images from inside the three-story pink house on Meadowbrook Road, and they're why the fraternity that had occupied the home for years was forced to shut down.

"I was initially shocked," said a neighbor, who happens to be in a different fraternity, Sigma Alpha Mu.

His reaction was similar to that of many of his fellow students. They'd heard allegations of extreme hazing at Sigma Pi for months, but then, on Tuesday evening, the student newspaper, the Hofstra Chronicle, published the photos as part of its in-depth investigation into the Sigma Pi chapter having its charter revoked.

The images show pledges subjected to extremely humiliating and possibly torturous conditions that other fraternities condemn.

"We really don't have hazing on campus," said Ryan Keefe, who also lives on Meadowbrook Road, and is in Sigma Alpha Mu, a fraternity in good standing.

"It's really been done away with," Keefe said about fraternity hazing at Hofstra. "I personally know [that] none of the fraternities haze."

Because the Sigma Pi chapter was off campus, its suspension by the fraternity's national office was done without the university's knowledge. The national Sigma Pi office would not provide specific details to Hofstra, which then set out to find exactly what had happened.

The university said it "made inquiries of several members of the chapter about the revocation. None provided any information, or raised concerns about new member education."

Later on Wednesday, though, Hofstra issued another statement about the alleged hazing, which reportedly occurred in the fall of 2014, and the spring and fall of 2015:

"The University condemns the incidents depicted in the photos and reported in the story and has commenced an immediate investigation. In addition, the University has also reached out to the Nassau County Police Department for their support and investigation of any potentially criminal behavior."

Now that the fraternity house has been gone for the better part of a year, and the home's owner lives on the premises, an anchor of local student party life is gone. Longstanding residents couldn't be happier.

"They terrorize[d] the neighborhood," said a woman who lives across the street from the former frat house, but did not want to give her name. "It was crazy. Hofstra should pay us for how [the fraternity] terrorized the neighborhood like this."