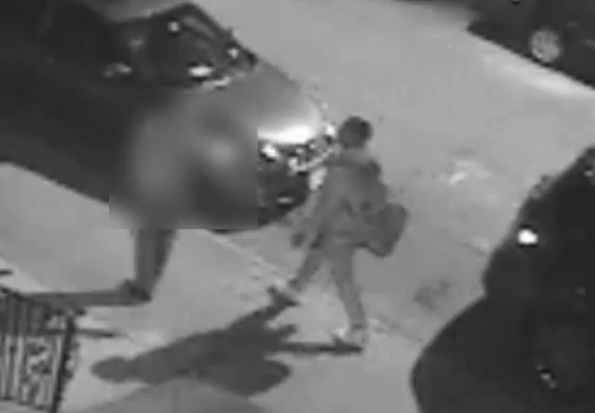 CROWN HEIGHTS, Brooklyn – Cops are looking for a male who painted a swastika on a street in front of a 78-year-old man's Crown Heights home over the weekend, reflecting a trend nationwide in hate crimes post-election.

The hate symbol was sprayed onto a sidewalk in the vicinity of Montogmery Street and Brooklyn Avenue at 6 p.m. Saturday, police said. The male, who was wearing a gray sweater and had a backpack, fled westbound on Montgomery Street.

Police released surveillance video showing the individual wanted in connection to the criminal mischief incident. Anyone with information in regards to this incident is asked to call the NYPD's Crime Stoppers Hotline at 1-800-577-TIPS (8477) or for Spanish, 1-888-57-PISTA (74782).

From New York to California, there have been several reports of hate crimes in the aftermath of Donald Trump's presidential win on Wednesday. He has since called for any of his supporters harassing minorities or destroying property to "Stop it" in a wide-ranging interview on 60 Minutes that aired Sunday night.

At the NYU Tandon School of Engineering, students discovered the name of the President-Elect written on the door to a prayer room for Muslims on Wednesday. The NYPD said they are investigating the matter.

In west New York, students at Canisius College posted photos of a black doll hanging from a dormitory curtain rod on social media. The college president called it a "disturbing incident."

In Ann Arbor, police say a Muslim student was threatened by a man who said he would set her hijab on fire unless she took it off. Some students in Michigan's Royal Oak Middle School started chanting in the cafeteria: "Build the wall! Build the wall!

Nazi-themed graffiti also appeared in South Philadelphia but it was unclear if it was a protest of Trump or a pro-Nazi act.

A student at a high school in Redding, California posted a video of himself handing letters with the word "deportation" written on it.

A form has emerged online  for New Yorkers who are willing to accompany their neighbors on their commute in light of recent harassment and threats toward people of color, LGBTQ people, and Muslims. This link can be found here.