Protesters stand in solidarity against President-elect Trump for fourth day 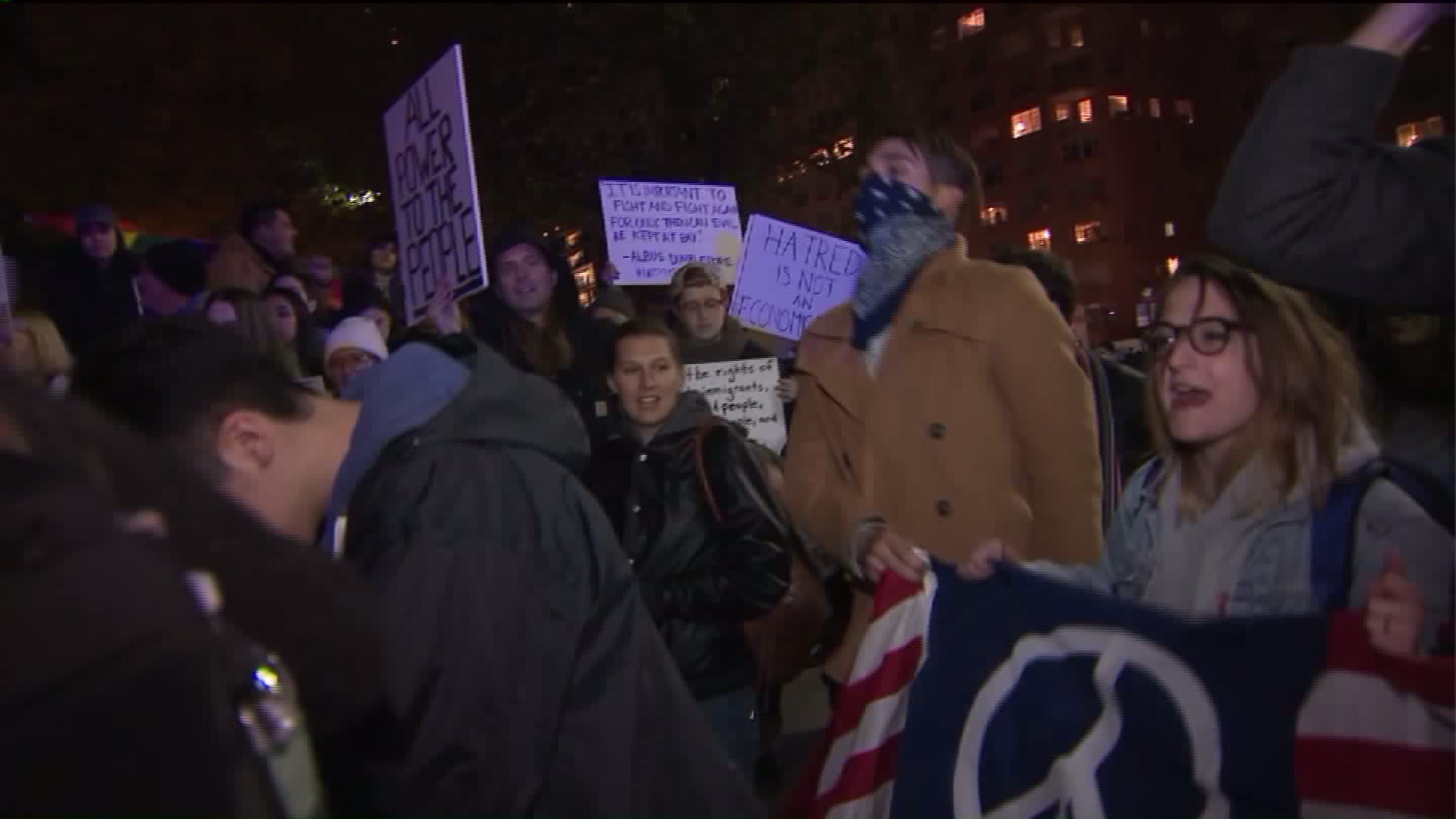 NEW YORK — Thousands of people marched two miles and gathered outside Trump Tower, the President-elect's home in Manhattan, where they chanted and proclaimed that he was "not my president."

They carried signs saying "love trumps hate" and "I am not bitter, I am a patriot." For part of the march, they chanted, "Donald Trump go away. Racist -- sexist - anti-gay."

"I don't know what we can actually do to change things," protester Allen Meisner told CNN, "but we have to keep coming and making sure his hatred and his fear and the anger that he's stirring up and using to get elected doesn't manifest itself in our country."

"I think that we are getting together to support each other as a community because this is a huge loss," Andrea Garcia said. "This election has set us back and has definitely shown the world that we are not as advanced as we claim we are."

A crowd of just a few hundred quickly grew to possibly as large as 15000 or more as they marched up to 56th Street and Fifth Avenue.

Once they got close to Trump Tower, the demonstrators were kept in NYPD-designated pens that stretched for at least five blocks.

Documentary maker Michael Moore arrived at Trump tower before the Protesters and took to Facebook live to ride the escalator up four flights to leave a note for the president elect.

By 8 p.m. ET, only a few dozen protesters remained and Fifth Avenue was open for traffic. Police said a few people were arrested Saturday but that the protest was largely peaceful.

Donald Trump, who was home throughout this day of protests, tweeted only once: "this will prove to be a great time in the lives of all Americans we will unite and we will win win win."

As President-elect Donald Trump's administration begins taking shape, thousands took to the streets of a divided nation again Saturday to express their frustration at the stunning election result.

While largely peaceful, the protests have resulted in blocked highways and bridges, arrests during clashes with police and the early Saturday shooting of a man at a march in Portland, Oregon.

In Los Angeles' MacArthur Park, the site of immigration rights protests over the years, demonstrators took turns Saturday swatting a stick at a piñata resembling Trump.

By 8 p.m., police had reopened Fifth Avenue to traffic in front of Trump Tower where protesters held signs and chanted from the sidewalk.

"Words can't describe how disgusted I am that he was elected over Hillary (Clinton)," Shoshi "Rabin" Rabinowitz said Friday night, explaining her motivation for being near Trump Tower.

Fellow protester Nick Truesdale said, "I think he needs to really address all the divisive, hateful things he's said in the past and recant them, denounce them."

The President-elect appeared more conciliatory Friday morning, saying: "Love the fact that the small groups of protesters last night have passion for our great country. We will all come together and be proud!"

There has been a heavy security presence in the lobby of the Fifth Avenue and E. 56th Street building.

By the afternoon, security stopped letting the public enter the building. There were a few dozen Secret Service agents, NYPD officers and building security guards. Several of the police officers have bundles of plastic cuffs.

Among the cities that were scenes of Friday protests were Los Angeles; New Haven, Connecticut; Orlando; Chicago; Boston; Asheville, North Carolina; Nashville; and Columbus, Ohio, and there were marches at schools in Denver and Omaha, Nebraska.

Groups across the country are angry about policies Trump has promised to enforce concerning immigration, the environment, LGBT rights and other issues.

The Facebook page for a protest planned in Burlington, Vermont, said: "Come protest the xenophobia, racism, homophobia, misogyny, and climate science denial of the Trump/Pence regime!! Come show your support for our Muslim, queer, immigrant, and female family!!"

The protests were mostly peaceful, but some were marred by violence.

In Portland, a man was injured in a shooting early Saturday on the Morrison Bridge during a protest march.

The suspect was believed to be in a vehicle on the bridge when a confrontation unfolded with a member of the crowd, Portland police said in a statement. The suspect got out of the vehicle and fired multiple shots before fleeing.

The victim's injuries were not life-threatening, and he was treated at a hospital.

City officials earlier had appealed for calm after a Thursday night protest by about 4,000 people turned violent. Windows on businesses were broken, and a car dealership was vandalized. Twenty-six people were arrested, police said.

"We had some anarchists who hijacked that event and did terrible damage to our neighbors and friends," Mayor Charlie Hales said at a news conference. "They spread violence and fear and detracted from the legitimate exercise of those First Amendment rights."

In Boston, hundreds gathered on Boston Common for a "Love Rally in the Common." Organizers said on Facebook: "Let's unite together to peacefully show all of those whom Donald Trump or his supporters have put down that we still care about them, and to give them an opportunity to have their voices be heard."

Some arrests were made in Los Angeles -- but the police department was not able to provide immediate details on the number arrested.

In Chicago, police told CNN they are investigating an incident this week in which a group of people reportedly beat a man while yelling that he voted for Trump.

Cell phone video captured the man in a minor traffic accident Wednesday on Chicago's West Side.

The 49-year-old driver, David Wilcox, told CNN affiliate WGN-TV that a car scraped the side of his vehicle as he was about to make a left turn at a busy intersection.

"I heard a lady yell something about 'that guy is one of those Trump supporters,' " Wilcox told the station. "I turned and said to her, 'That has nothing to do with this.' "

The situation then apparently escalated as bystanders yelled anti-Trump taunts at Wilcox. The video shows Wilcox being knocked to the pavement, repeatedly being punched and kicked as a handful of people gather around him.

In Miami, hundreds walked down Biscayne Boulevard chanting, "Love Trumps Hate," and carrying signs with messages such as "How many judges will it take to ruin America?" video from CNN affiliate WSVN-TV showed.

Some protesters walked onto Interstate 95 and surrounded cars, bringing four lanes of traffic to a standstill, according to the WSVN footage.

In Iowa City, Iowa, about 75 protesters shut down I-80 briefly, police Sgt. Chris Akers said. Nobody was arrested, he said.

In Dallas, protesters dragged and kicked a Trump piñata through the streets. A store window was reportedly smashed.

In Atlanta, about 500 people marched downtown, said Atlanta police spokesman Lukasz Sajdak. They tried to walk onto a highway, but law enforcement officers turned them back. No arrests were made.

An American flag was burned near Georgia's state Capitol, something that didn't please protesters Sanjay and Akshita Mendonca, who say they voted for Clinton.

"The current situation is not good for us and our children," said Sanjay Mendonca, 40. "I'm here for my kids because I don't want them to think we didn't do something. ... A lot of people feel hopeless right now."

When asked why he was protesting, 20-year-old Alex Hariri said, "Trump does not support anyone in the community I know. I'm a gay Middle Eastern man. He's against everything I am."