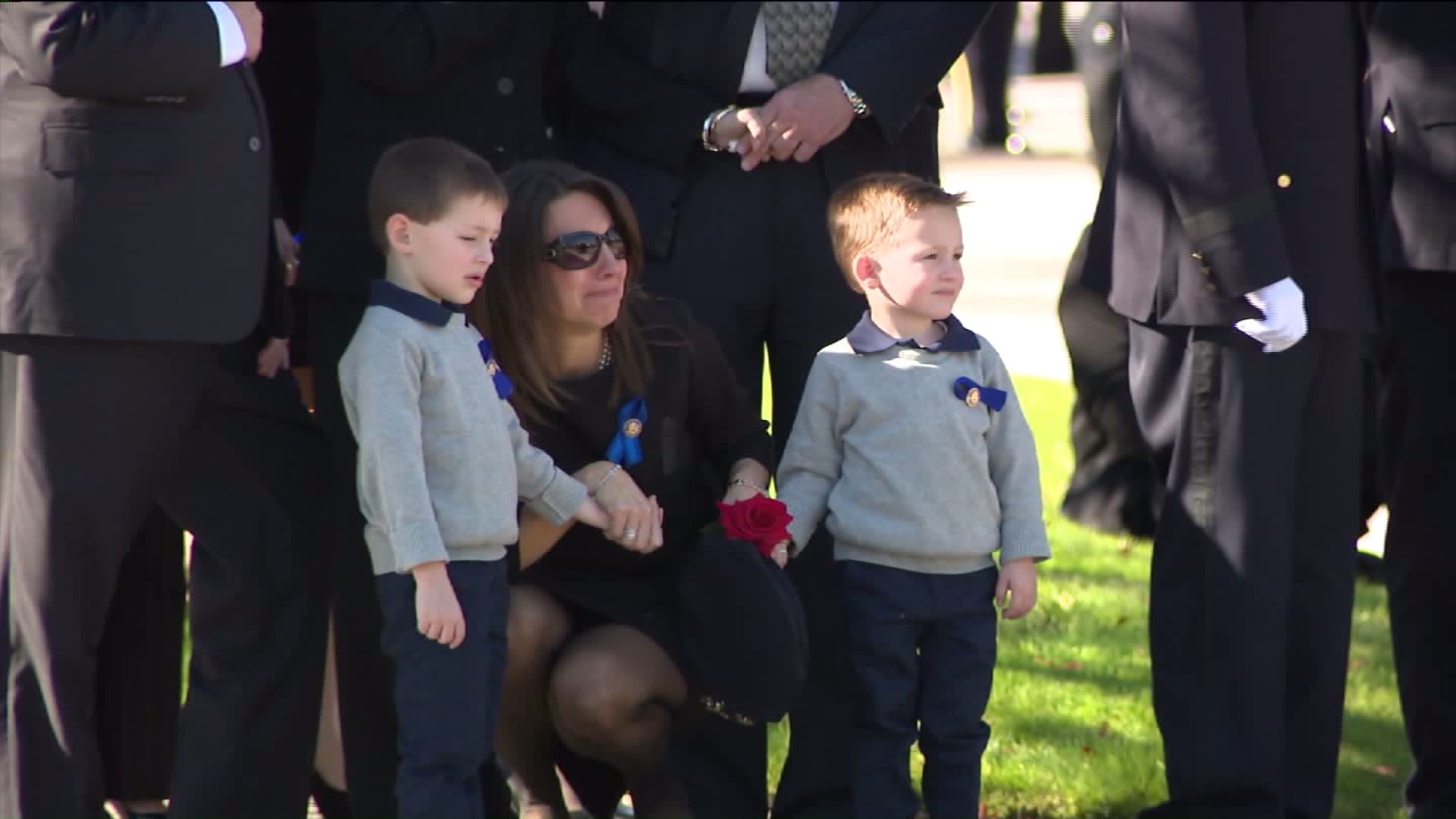 MASSAPEQUA, Long Island — The boys' mother crouched close to the ground and clutched the hands of Austin and Joseph, ages 4 and 3, as their father's casket -- covered with the official NYPD flag -- passed by them on Thursday in one of the more poignant images from the funeral of NYPD Sgt. Paul Tuozzolo at St. Rose of Lima Church in Massapequa, Long Island.

Tuozzolo was fatally shot, point blank, on Nov. 4 during the pursuit of a suspect in the Bronx.

During his funeral, Tuozzolo's widow Lisa, an assistant principal in the West Islip School District, was repeatedly assured by eulogists how much Tuozzolo loved her and their sons.

Aerial footage showed thousands of officers who turned out from police departments across the country, including two PIX11 News met from Glendale, Calif.

"We came to support the brothers in blue," said one.

This year has been an especially dangerous one to be a police officer, with five assassinated in July in Dallas and another three, 10 days later, in Baton Rouge, Louisiana.

In fact, in the early hours of Thursday morning, two police officers in Canonsburg, Penn., where shot as they responded to a domestic violence call. One did not survive.

Tuozzolo, 41, who had spent recent years as a domestic violence officer in the Bronx's 43rd Precinct, was just a year away from retirement eligibility, when he made his final call last Friday. Instead of keeping a desk job, he requested patrol work for his last year with the department.

He was responding to reports of a home invasion that was actually a domestic disturbance gone haywire.

The estranged wife of Manuel Rosales, 35, said Rosales was trying to break into her apartment on Nobile Avenue. Tuozzolo, Sgt. Emmanuel Kwo and another officer responded to a report that Rosales' Jeep Grand Cherokee was spotted not far from the southern end of the Bronx Zoo.

"Paul saved my life," Mullins said, quoting Kwo. "I was approaching that car, too. He yelled to us, 'Gun. Gun. Gun.'"

Tuozzolo was shot in the face and chest and was pronounced dead at the hospital.

Mayor de Blasio was somber as he addressed the packed church. He told Tuozzolo's boys that his own father had died when he was young.

"I know you will remember that your dad was a hero," the mayor said. "You'll know your father was someone we looked up to. On behalf of 8.5 million New Yorkers, I offer my deepest condolences."

Friends remembered that Tuozzolo liked to fish and also enjoyed a good cigar.

Mullins pointed out it's been a violent two years on the streets for police officers.