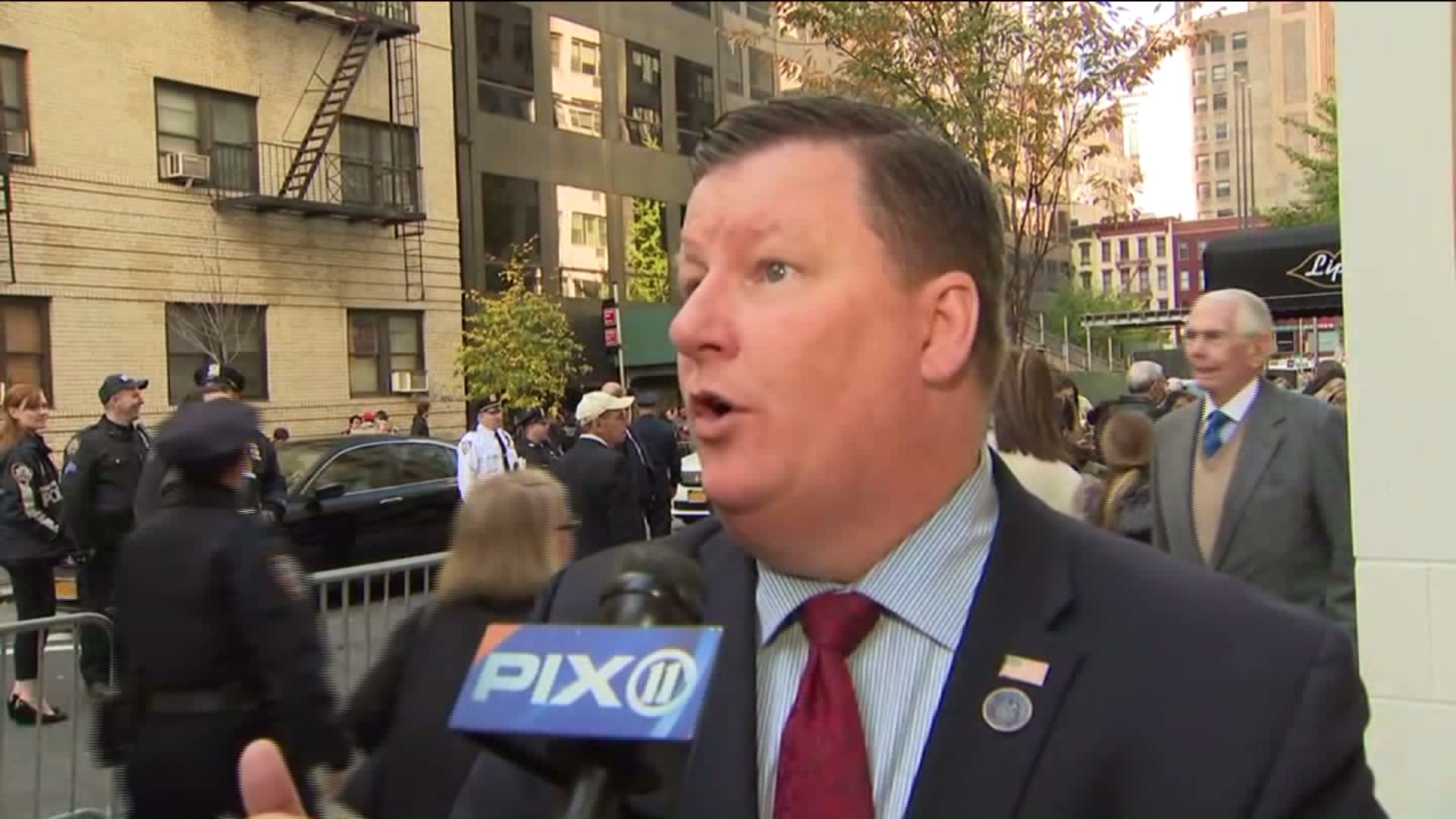 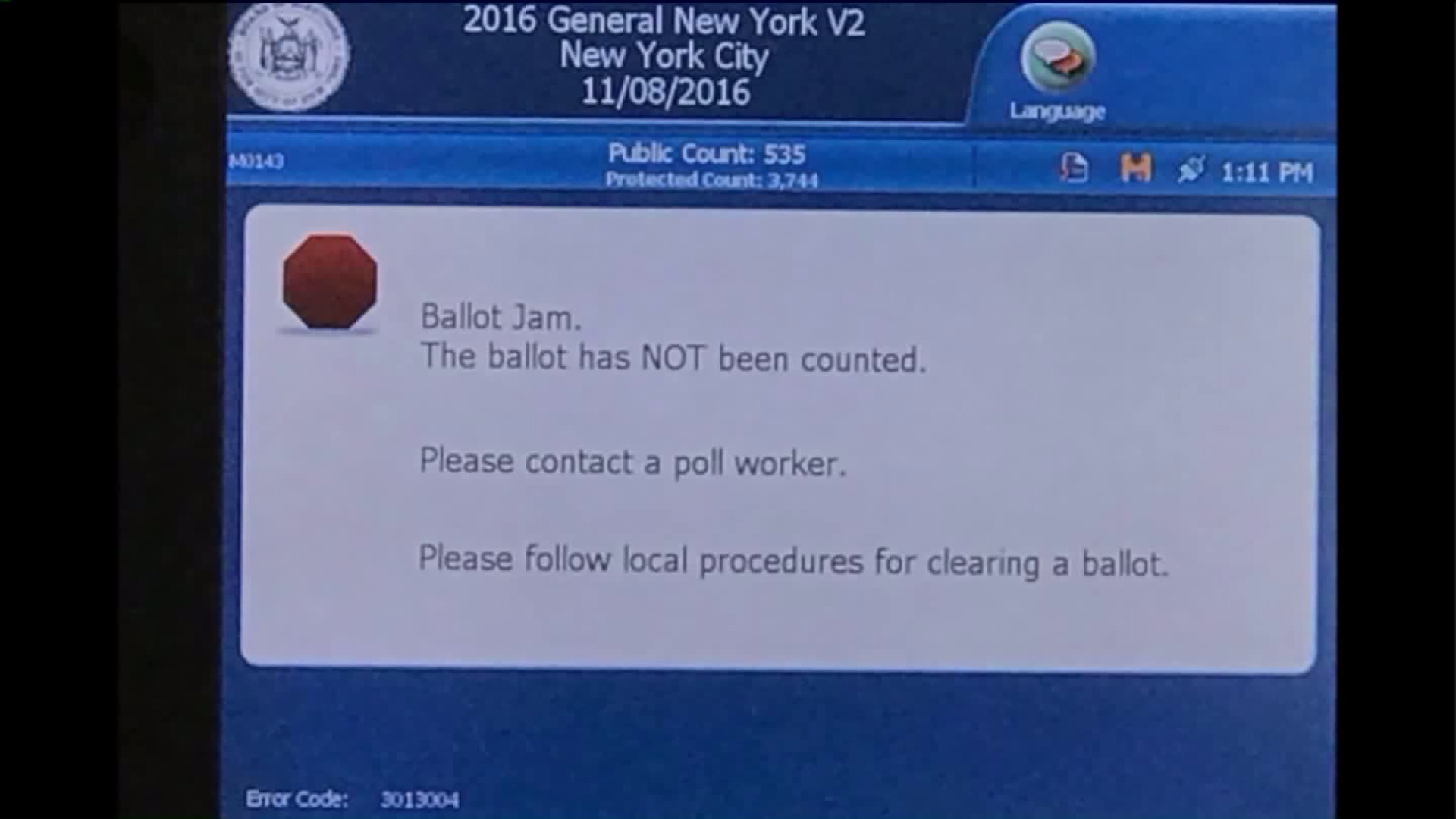 NEW YORK — Voters across New York City and elsewhere in the tri-state area were plunged into voting nightmares on Election Day,  facing wait times of up to three hours, misplaced ballots, broken machines and even names vanishing from the rolls.

PIX11 viewers across Brooklyn, Manhattan, Queens and New Jersey have been contacting the newsroom with their complaints throughout the day, beginning just minutes after polls opened at 6 a.m. And social media posts are rife with tales of expected obstacles.

"It's a big process," said Michael J. Ryan, executive director of NYC Board of Elections. "There's 1,205 poll sites, there's over 68,000 pieces of individual equipment that need to be delivered, and sometimes there are hiccups here and there. Typically that's not a widespread problem."

Several New Yorkers begged to differ with that last claim, however, and reported issues such as all voting machines breaking at a Manhattan polling station at E. 88th Street and York Avenue. Emergency ballot boxes were brought in as an alternative.

The broken ballots created stress among voters who had been waiting for hours.

"Is my vote going to count? If I put it in there will it count?" one man yelled from the line.

By 5 p.m., just hours before the polls closed, voters were wrapped around the block, stretching to 89th Street. Voters told PIX11 they had been waiting for up to two hours.

Voters were seen reading books to pass the time.

In Crown Heights, people began lining up outside P.S. 1, at 532 Albany Ave. by 5:30 a.m. — a half hour before the polls opened, according to voter Bevy Cruz.

Within the hour, that line had not moved, and police confirmed “that all the books and ballots have been misplaced,” according to Hannah Sheehan, Twitter user @hsheehannyc.

Video of the scene showed a poll worker telling anxious voters the NYPD and other officials were coordinating a transfer of the necessary materials. NYC Board of Elections staff also reportedly responded to the scene.

A poll worker explains that they are trying to fix the problem, but still have no information about when we can vote pic.twitter.com/XdUBWzbKg0

Shortly after the announcement to the crowd — which Twitter users said included the elderly, a veteran, and those who were in a hurry to get to work — the line became “significantly shorter” as people gave up and left, according to Cruz.

“Some were just too cold,” and others had to leave for work, Cruz said of those waiting.

"We do not have the correct ballots." -Someone at P.S. 91 in Brooklyn.

Line mad short now. Most left after the announcement. 😔

A police escort brought the necessary materials to the location minutes after the announcement, but it took another 30 to 40 minutes to set up the polling place, voters said.

By 7:15 a.m., the line began to move, but then, Sheehan tweeted, "one of the only two scanners here just broke."

In all, Sheehan waited two-and-a-half hours to make her voice heard.

Due to problems at my polling site, I waited two and a half hours to vote this morning #Election2016 #ElectionDay pic.twitter.com/mLOueGGCfA

However, once inside, the drama continued for some voters, according to Flavio Colorado.

He, along with others, were put in the wrong line, and those working the polling place could not initially locate his voter information.

"I didn’t accept the affidavit. I told them my name is here, I’m registered here… Eventually they found it," Colorado said.

When asked about the Crown Heights ordeal Tuesday morning, Ryan said he had not yet been briefed on it.

He later added that inaccuracies when filling out forms can lead to affidavits being necessary.

Votes will count for those who are currently registered, he reaffirmed.

“If they were duly registered, and for one reason didn’t end up in the poll book, their vote will be counted and they won’t be disenfranchised. If it turns out they thought they were registered and they really weren’t, then that will serve as a registration for the next time,” Ryan said.

Voting in Brooklyn's Prospect Lefferts Gardens was equally terrible, according to voter Laticia Maldonado, who said she waited three hours to vote.

“The line is very long, you have to be patient ... I’m not even gonna lie, it was terrible. It should have been better. Very unprofessional," she said, while still encouraging people to stay strong and still vote.

Only two out of six machines were working at the center, prompting long lines around the block, fellow voter Twiggy said.

On a bright side for senior citizens, at this particular polling center, they were allowed to bypass the line, Twiggy added.

Similar problems plagued Harlem's P.S. 154, where three scanners were broken — leaving one working — for about three hours until being fixed.

.@BOENYC There is only 1 working scanner at PS 154 in Harlem. It is causing complete chaos and discouraging voters. pic.twitter.com/8he54ZNLeb

"I think it was a strategy to discourage African Americans and Latinos from voting," substitute teacher Tina Lee Jones said. "Waiting in line to vote could discourage anyone."

Undeterred, Jones waited two hours — although she had been expecting the 10-minute wait she faced during the primaries.

"We didn't get discouraged. We stood in line and cast our vote and made sure it counted," she said.

Vince Morgan waited in the same line for an hour and a half, and said it was the longest he'd experienced in his 17 years of voting in the district.

"The Board of Elections in New York sucks. It really does. It's been consistent problems with them," Morgan said. "We knew this was happening for how long and no one did anything? Why?"

Voters at P.S. 92 in Brooklyn were also forced to wait when machines and ballots didn't arrive at the beginning of the day.

The chaotic scenes echoed reports from numerous polling places, and tweets sent to the NYC Board of Election throughout Tuesday, including ones about missing books, one scanner being used at a location where hundreds were lined up, and polling places not opening on time.

"Keep in mind this is an unprecedented election in our lifetimes," he said, referring to both major party candidates, and their families, casting their ballots in the state in addition to the more than 2 million citizens expected to vote — double that of a gubernatorial race.

If you face problems at the polls, tell us your story by clicking this link.

You can also contact the NYC Board of Elections by clicking the link, or tweeting at @BOENYC.

Long lines!! Voters cue up for well over an entire Avenue in Midtown between 2-3 at E56th. Some waiting 90+minutes. @PIX11News #ElectionDay pic.twitter.com/XIoFWVGWCS