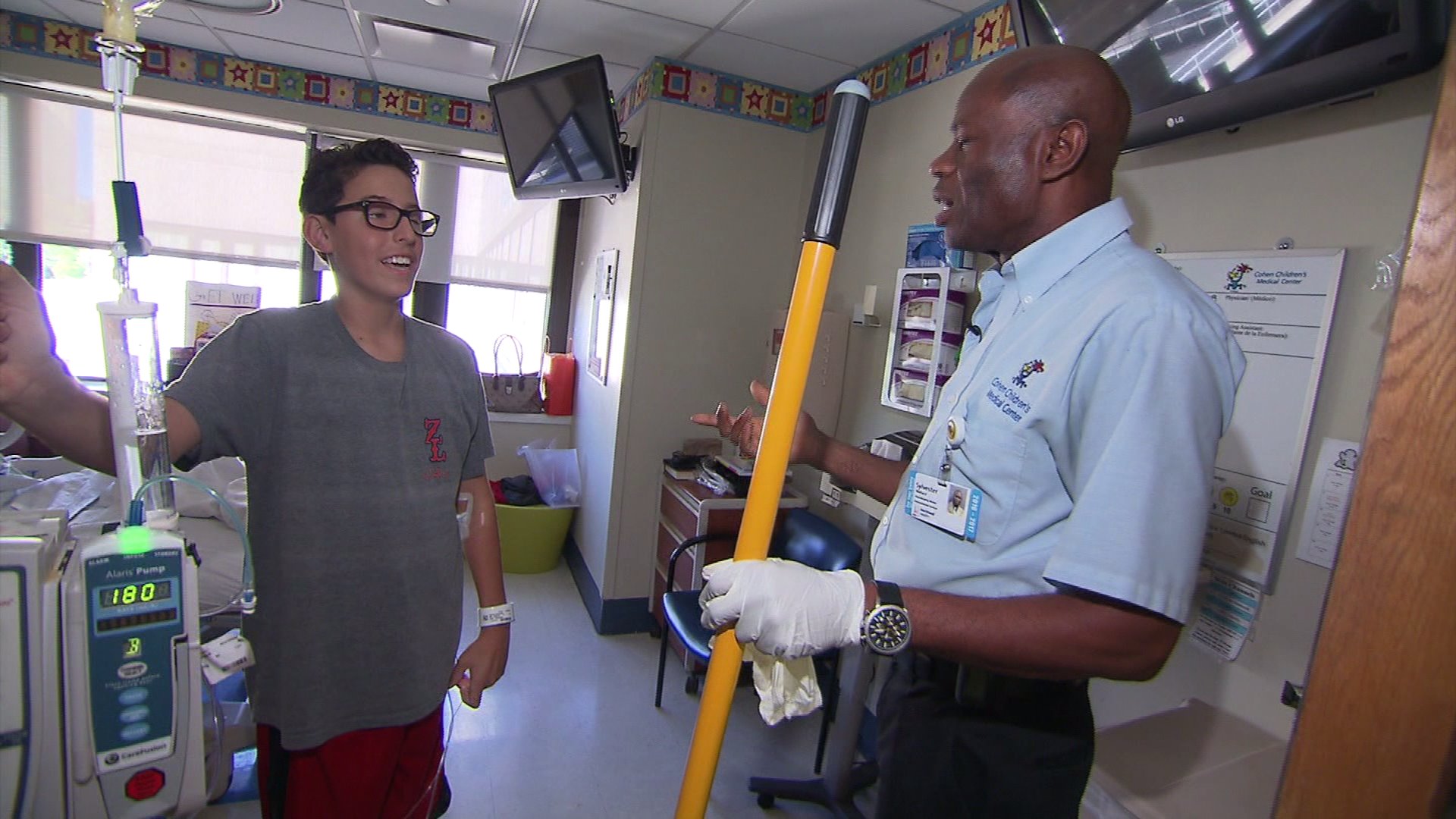 In this week`s It`s a "G" Thing, M. G meets a man who brings a special spark to his job as a hospital janitor

“All I need is to give, give and just give,” Sylvester Wallace said.

Sylvester Wallace has found his calling.

“My main job is when I come in the morning, I get my area together and I sweep the floor then mop it," he described.

A career, for him, that’s much less about cleaning, and more about connecting.

“Give me a high five," he said playfully to a

“I know what I’m blessed with, I have a gift that God gave me,” he said.

Many call him an Angel with a Broom.

“Did you take your walk?" he asked Chris, a patient. "No not yet, I was going do it,” Chris replied laughing.

He takes tremendous pride in his relationships with patients.

“Sometimes when my day’s not that good, and when he walks in, then my day is going much better,” Shobha, a teen patient, said.

“Do you like Sylvester?" I asked Sky, a toddler patient. " Yes!" she smiled.

Born and raised in Jamaica, Sylvester moved to the United States when he was 18.

"What I did was work and work and work," he explained. "My mom was a single parent so that's what I had to and that’s what I’ve been doing all my life.”

It wasn't until he started here, at Cohen Children’s Medical Center, that he realized his true purpose.

“When I came to this hospital, and saw what a parent and a child has to go through, I just looked at life totally differently," Sylvester said.

He’s a father and a man of God, who brings his faith to families every day.

“I’m a parent so I can just imagine and sometimes you just need someone just to speak to, and to hear everything is going to be fine."

"He’s really nice, he’s very personable, he’s always friendly and we always talk in the morning when he comes in," Albannette Harrison, a mother, said.

Kindness and commitment, acknowledged all the way at the top when he was awarded the President's Award.

"How did that feel?” I asked. "Touching but I didn’t go there to win because it's not about me, it's about the parents and the children."

An attitude that’s caught on with some of his co-workers.

But one that also gets him into a little trouble sometimes.

“I heard sometimes he doesn't get all of his work done?" I jokingly asked Nicole. "No, he doesn’t," she smiled. "Sometimes I’ve got to call his boss.”

It became clear that no one can do what Sylvester does, and he hopes no one else has to for a long time.

“How long do you want to keep doing this work?" I asked him. "As long as I live,” he smiled.