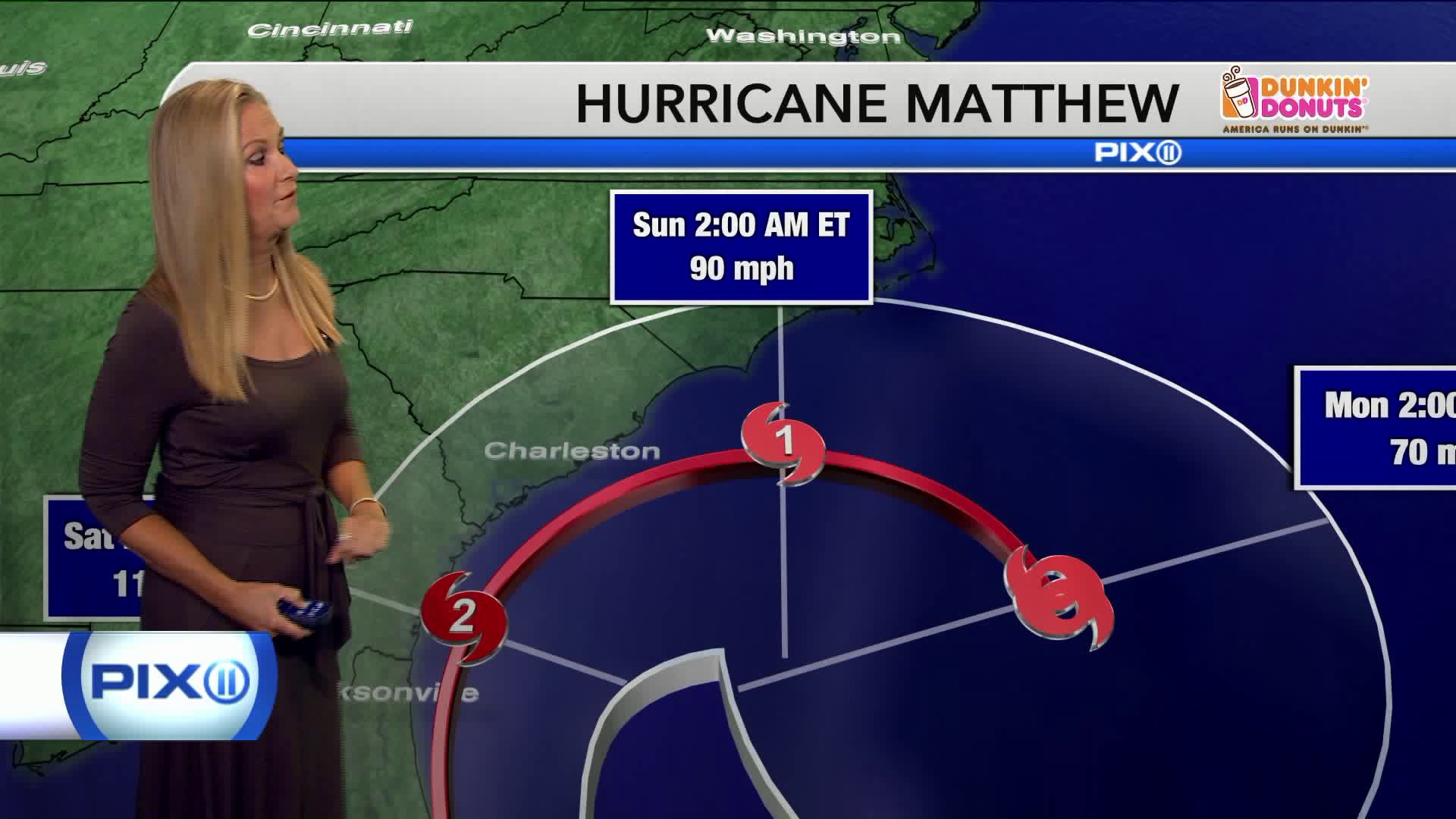 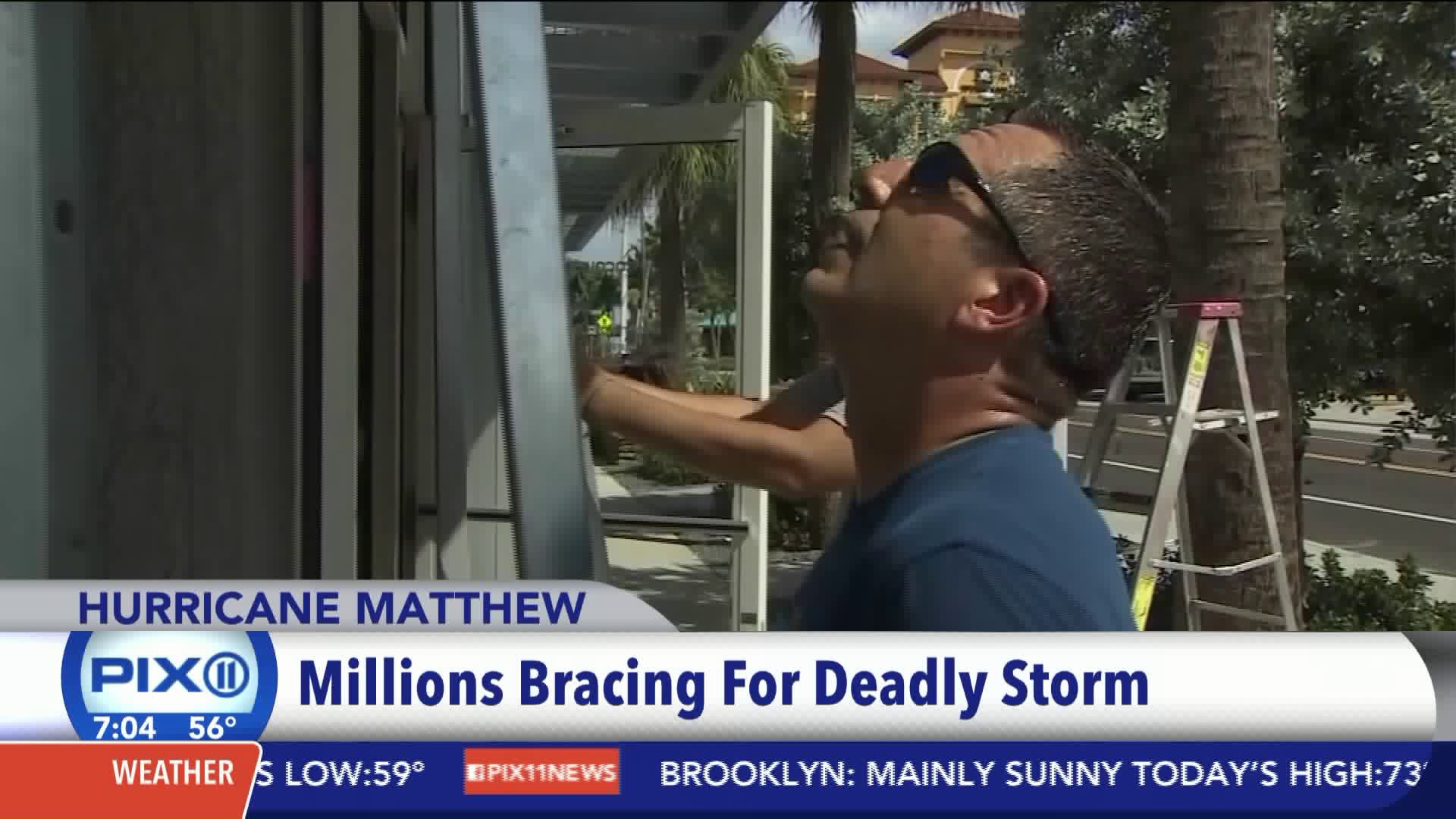 President Barack Obama has declared an emergency in the state of Florida and has ordered federal aid to supplement state, tribal, and local response efforts to Hurricane Matthew.

Obama's action authorizes the Department of Homeland Security and the Federal Emergency Management Agency to coordinate efforts to alleviate the suffering caused by the hurricane. The directive applies to more than two dozen counties in Florida.

Emergency declarations are designed to help provide emergency services to protect lives and property, and to lessen the threat of a catastrophe.

Hurricane Matthew is pummeling the Bahamas right now, and its dangerous winds have picked up speed as the storm continues north. Its next stop could be the United States.

Here's what you need to know now about the powerful storm that forecasters say is gaining strength:

• The storm has already killed at least 113 people in three Caribbean countries. At least 100 have died in Haiti alone, said Civil Protection Service spokesman Joseph Edgard Celestin, who says communication issues have prevented authorities from assessing the damage and casualties in the far southwest portion of the country.

• Hurricane Matthew has strengthened into a Category 4 hurricane with winds of 140 mph and gusts up to 165 mph, according to the National Hurricane Center. Matthew continues to near Florida's east coast and is expected to hit the coast late Thursday or early Friday. As of 2 p.m. ET, Matthew was located about 125 miles east-southeast of West Palm Beach, Florida.

• Authorities urged more than 2 million people to leave their homes in coastal Florida, Georgia and South Carolina as the storm neared — the largest mandatory evacuations in the United States since Hurricane Sandy hit the East Coast in 2012.

• Based on the latest projections, Matthew could make landfall in Florida early Friday as a Category 4 hurricane. It could also skirt the coast as it continues north. While Matthew's outer bands were already starting to hit Miami-Dade County by mid-morning, Mayor Carlos Jimenez said there's a bit of good news: "The probability of sustained hurricane winds has gone down 13%." The latest advisory says hurricane-force winds will extend 60 miles from Matthew's eye.

• Florida Gov. Rick Scott offered a dire warning Thursday morning for the 1.5 million people living in evacuation zones: "This is serious. ... Don't take a chance. If you need to evacuate and you haven't, evacuate. This storm will kill you. Time is running out."

Scott told Floridians on the state's Atlantic coast that the question is not whether they will lose power, but for how long.

Scott warned 1.5 million residents they had 24 hours to get ready, or better yet, get going.

A direct hit by Matthew, he said, could lead to "massive destruction" on a level unseen since Hurricane Andrew devastated the Miami area in 1992. Voluntary and mandatory evacuations in his state stretch from the Miami area all the way north to the Florida-Georgia border.

People who stayed behind stocked up on supplies and boarded up windows, as there were numerous reports of county governments, schools, cruise lines and amusement parks closing.

Airline passengers were urged to call before leaving for the airport. Florida airports had canceled hundreds of flights, most of them in Miami, Fort Lauderdale and Orlando. Fort Lauderdale closed its airport, airlines suspended operations in Miami, and Orlando's airport was slated to close at 8 p.m. Thursday, airport officials said.

Palm Beach residents cleared many grocery store shelves ahead of the storm.

In Jupiter, resident Randy Jordan told CNN affiliate WPEC people were pushing and shoving their way through the local Home Depot to buy supplies ranging from batteries to flashlights.

Residents still had a sense of humor. Olivia A. Cole posted a photo on Twitter of an empty grocery shelf, save for eight cans of a soup typically enjoyed in another part of the country. "South Florida wants to survive #HurricaneMatthew. But we'd rather die than eat clam chowder," Cole joked.

Close to half a million people were expected to have evacuated by Thursday, said Kim Stenson, director of South Carolina Emergency Management.

Tempers apparently flared during the slow traffic. A man got out of his truck at a point where vehicles were being redirected, removed a traffic cone and sped away. Police chased the man until he stopped on a dead-end road. The man fired at deputies and police officers, who shot back and wounded him, Berkeley County Chief Deputy Mike Cochran told CNN. The man was hospitalized, but his condition is unknown.

The South Carolina Department of Transportation changed the directions of eastbound traffic lanes to accommodate the exodus of people leaving coastal cities like Charleston.

As thousands fled inland, some people said they were staying put. In Charleston, which likely will feel Matthew's impact this weekend, residents boarded up businesses and prepared to hunker down.

Cheryl Quinn said she and her husband were fine a year ago when Charleston endured heavy rain after a brush with a big storm.

"It was kind of a party down here. I hate to say that," she said, adding that storms can be scary, too.

But she told CNN she's reserved a hotel room, just in case.

North Carolina playing it by ear

North Carolina Gov. Pat McCrory declared a state of emergency for more than half the state's 100 counties. So far, though, the governor has not urged residents to evacuate.

The changing forecast now predicts the storm won't have as great an impact on the state as once feared, and Matthew might even turn around before it gets there.

"We're just going to have to play it by ear and have our resources ready," the governor said.

Officials are still concerned areas in eastern North Carolina that were recently flooded will see drenching rains from Matthew.

Georgia Gov. Nathan Deal has declared a state of emergency in 30 counties on or near the Atlantic Coast and ordered evacuations for several counties, all on the coast, east of Interstate 95.

Of special concern is Tybee Island, a low-lying island east of Savannah, which is also under mandatory evacuation orders.

"If you decide to ride it out, do not expect us to be there to help you. We will not risk the lives of our emergency responders to save those who refused to heed this evacuation call," he said in a statement.