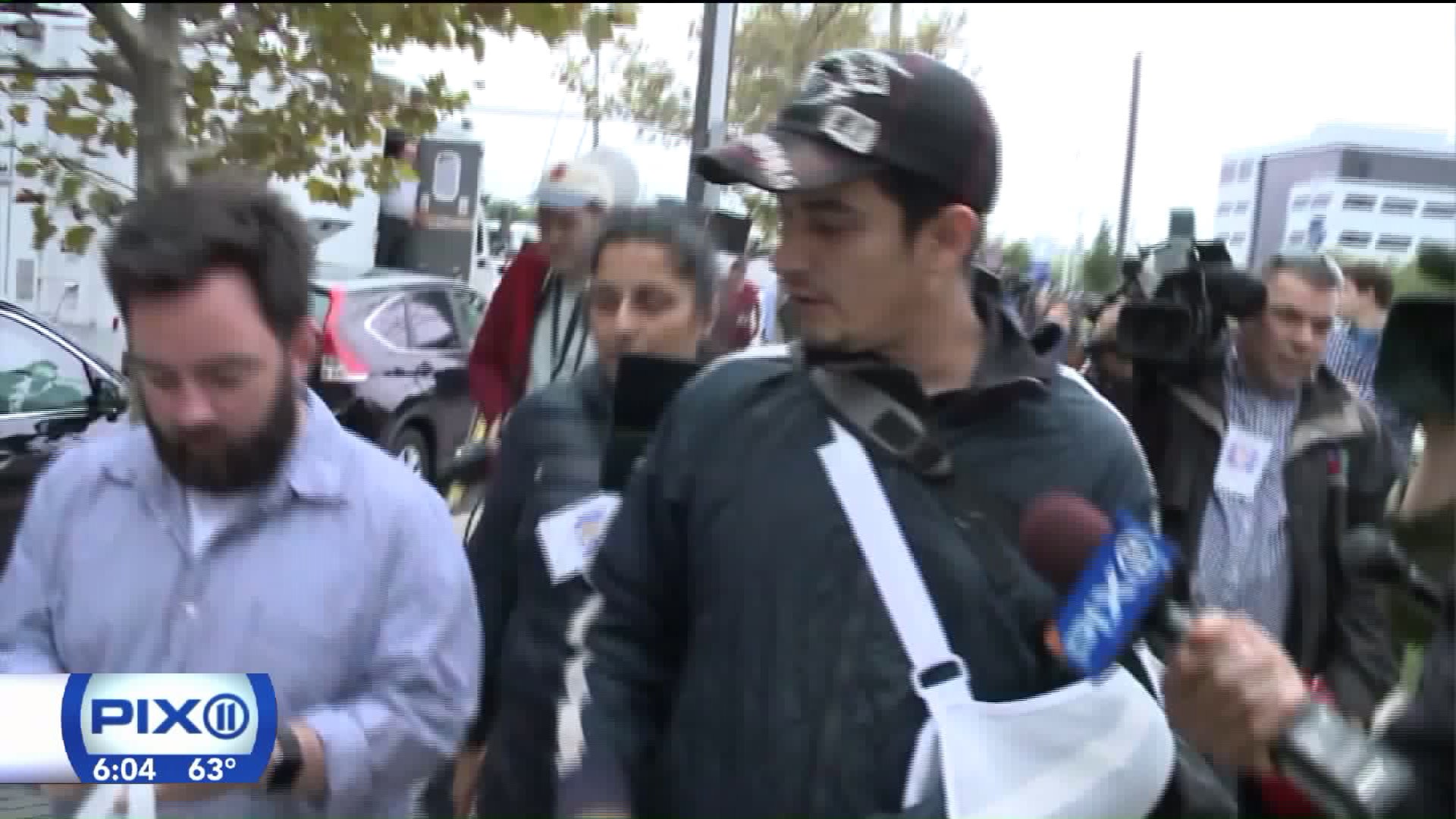 JERSEY CITY, N.J. — When an NJ Transit commuter train ran into the Hoboken train terminal, there was double impact, each one causing injuries to mount in both number and severity.

The first impact threw passengers back, the second moved them in a variety of directions within the rail cars, leaving them in desperate need of medical help.

"We got off the train," said Newbria Mitchell, a passenger in the first car. "The people that were bleeding, had the most serious injuries, were taken care of first" at a mobile triage area set up by emergency management agencies at the scene.

"The rest of us," she continued, in an interview minutes after being discharged from Jersey City Medical Center Thursday afternoon, "were put in a bus and brought here."

Two hospitals, JCMC, and Hoboken University Medical Center, took in almost all of the 89 patients in need of medical attention away from the scene. A total of 114 people were injured, but 25 were seen to at the scene and released.

Of the rest, 66 were transported to JCMC, which is the main trauma center for all of North Jersey. Fifty-three of those patients were like one man PIX11 News encountered outside of the hospital, who gave only his first name, Miguel.

"I was walking," he said about what he was doing in the terminal when the train barreled into the waiting room, injuring him. His left arm is now in a sling. He, and 52 other patients, were also able to walk into the hospital and out again after being treated by physicians under understandably unorthodox circumstances.

"They set up triage in the cafeteria," said Mitchell, "and took care of us as soon as possible."

In fact, the first floor cafeteria was where most of JCMC's patients were treated and then released. Only 13 people were admitted. Their conditions were listed in the early afternoon as ranging from serious to very serious, but by evening, the hospital described all of their conditions as guarded.

It was a bad situation, but many people involved, on both sides of the stethoscope, said that significant preparation for situations like this prevented it from being worse.

"This is what we train for," said Dr. Meika Roberson, the chief medical officer of Hoboken University Medical Center. "Mass casualty scenarios," she said, was what he entire hospital prepares for once a month.

Thursday was, of course, no drill. HUMC took in 23 patients with "bumps, bruises, strains, fractures," said Dr. Roberson. One of the patients, who had a "fracture in one of the extremities," was admitted to her hospital.

Some of the patients who, as survivors of the devastating crash, had seen significant damage, nonetheless put the situation in greater perspective.

"There was somebody that lost their life," said Mitchell. "I'm just so grateful to be alive. God is good."

Eileen Reyes echoed that sentiment. She actually went to work after being jostled badly in the second car of the train.

"I was just in shock," she said. After a few hours, though, she started feeling sharp pain in her back and her ankle, which she later discovered was sprained, when she finally got herself to JCMC five hours after the crash.

Nonetheless, she told PIX11 News in an interview, "I'm just grateful. It reminds you that you can go to work, but never come home."

"It just makes you appreciate certain things," she said, choking back tears.