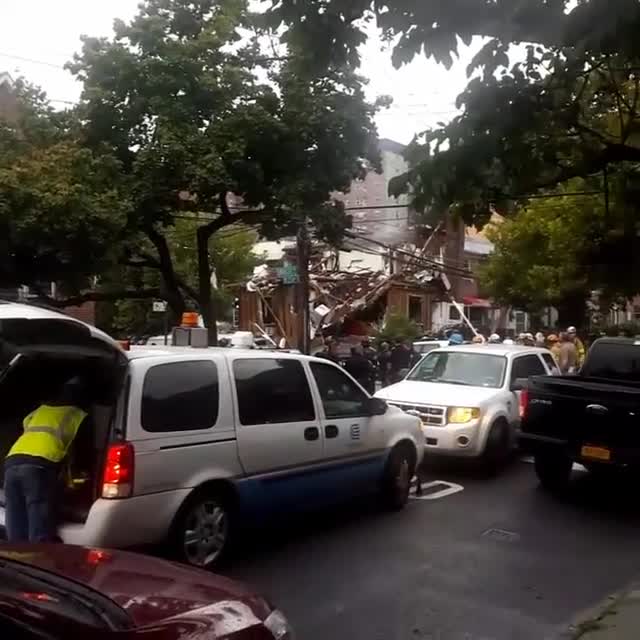 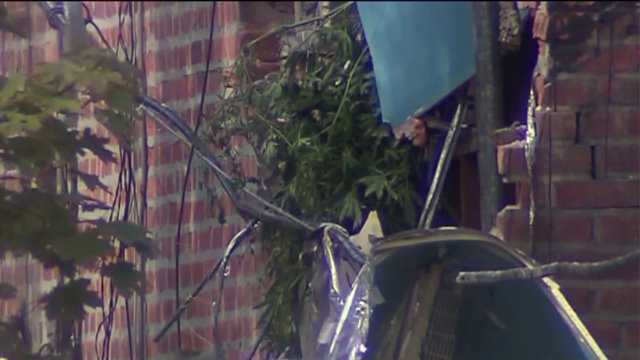 KINGSBRIDGE, the Bronx — A FDNY battalion chief was killed and at least 12 other people, including multiple police officers and firefighters, were injured during an explosion at a Bronx home that may have served as a grow house for marijuana, officials said Tuesday.

Firefighters were responding to reports of a gas leak when the explosion occurred at 304 W. 234th St. at about 7:30 a.m., according to the FDNY.

The firefighter who was killed has been identified as Battalion Chief Michael J. Fahy, a 17-year veteran of the department, officials said at a news conference Tuesday afternoon.

He was struck in the head and other parts of his body by portions of the home's roof during the blast, FDNY Commissioner Daniel Nigro said. Fahy was directing traffic away from the area at the time.

"We lost a hero today," Nigro said, describing Fahy as a "rising star" in the department and a "brave man."

Fahy, assigned to the 19th battalion, leaves behind a wife and three children, ages 6, 8 and 11.

"It's a very sad day for our city," Mayor Bill de Blasio said at a news conference.

At least 12 other people were injured during the explosion, including six police officers, two civilians, two ConEd workers, and several firefighters, Nigro said.

Emergency responders had been on scene for about an hour, and working to evacuate nearby homes when the blast occured.

The cause of the explosion remains unclear — fire officials initially described it as a gas leak, and later, detectives on scene said emergency responders had seen what appeared to be a possible meth lab inside the home.

Police were investigating a possible marijuana grow house on the block weeks before the explosion, NYPD Commissioner James O'Neill said at the afternoon press conference.

Additional details on the possible cause of the blast were not discussed, and Nigro said initial reports that it was a gas explosion may have been wrong.

Despite confusion over what caused the explosion, de Blasio told the public not view the tragic incident as a reason not to report possible gas leaks in the future.

“Never hesitate. … Call 911. Report it immediately," the mayor said. "The sooner that our first responders know, the more chance we have at saving people’s lives”

The home's roof caved in during the explosion, which sent pieces of the building flying through the street, and eventually covering the roadway and several vehicles.

A "huge boom" was also heard and felt throughout the Bronx's Kingsbridge and Riverdale neighborhoods, and residents quickly took to social media, describing the explosion as "crazy loud" and having rattled buildings for several blocks.

Maureen Murphy, who lives three blocks away from the explosion site, told PIX11 "it sounded like a bomb."

"I was up this morning getting my daughter ready for school, and I heard a loud [sound] like an explosion," Murphy said. "My daughter freaked out. I honestly thought it was a truck crashing."

Murphy was shocked at the idea that the explosion could have been caused by a meth lab, as initially believed.

"We live in a pretty quiet neighborhood," she said. "I hope that's not the reason."

It is with deep regret that FDNY announces the line of duty death of FDNY Battalion Chief Michael J. Fahy https://t.co/XDK0NLYp1k pic.twitter.com/KpXI0ulzZO

Expect traffic delays in area of Tibbett Ave & 234 St in the Bronx due to @FDNY & NYPD at scene of incident.

Heard an explosion at around 7:30am. Non stop sirens and firetrucks since. Now helicopters hovering. Riverdale, Bronx, NY 50th Precinct.