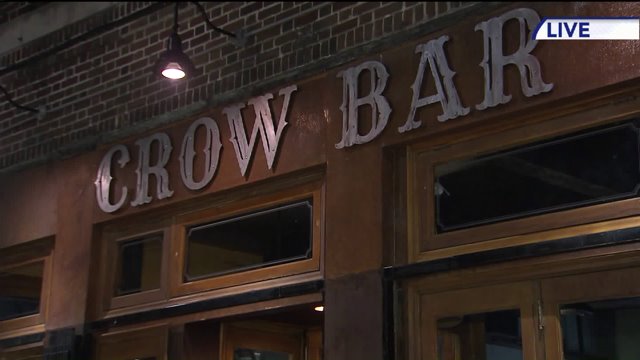 CROWN HEIGHTS, Brooklyn — Dozens of Crown Heights residents demonstrated in front of the newest bar in their neighborhood because they say the name Crow Bar is racist.

"They don't care," Richard Hurley, community organizer, told PIX 11. "They always make fun of us as the cartoon crow characters."

"It's another word for the 'N' word," Vaughn Armour, a Crown Heights resident said. "Crow. They would keep the crows at the bottom of the hill."

But Crow Bar owner Dan Wilby says the name of his bar is not racist, but instead echoes the history of this neighborhood when it was called Crow Hill after the 19th century Crow Hill Penitentiary on Carroll Street.

"It is around this time [the 1840s] that 'Jim Crow' emerged as a popular figure in racially offensive blackface minstrel songs... When it comes to the history of denigrating people of African descent the word 'crow' has never been 'just for the birds.'"

It was a racially mixed crowd instead Crow Bar, and even some imbibing think the name should be changed.

"It's a great bar, good food, inexpensive beer," Alex Poole, a Crow Bar customer told PIX11, "but if the name bothers some people in the neighborhood, they should change it."