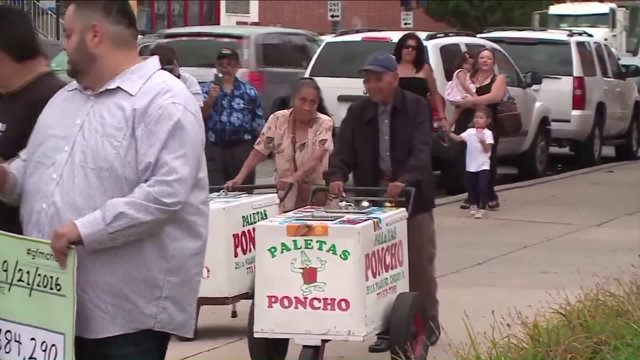 A GoFundMe campaign was started for Sanchez by a local Chicago man who wanted to help out. Joel Cervantes Macías was driving through the neighborhood and spotted Sanchez struggling to push his cart. Macías pulled over, bought about $50 worth of popsicles, snapped a picture of Sanchez and posted it to Facebook.

Macías’ post told Sanchez’ story: the 89-year-old man had retired, but returned to work after just two months when his daughter died.

That message spurred a campaign, started by Macías and Jose Loera. The campaign, which closed Monday, raised $384,290 for Sanchez and his wife in just 12 days. Donations poured in from more than 17,000 people across 69 countries.

Chicagoans came out to hand Sanchez a large check Wednesday.

In an interview posted to Facebook, Sanchez said he loves working, and plans to continue working. He also hopes to donate 50 percent to his local church.

"My wife and I first and foremost want to thank god for everything and especially for his angels Joe and Jose," Sanchez said in a statement released by his lawyer. "We also want to thank all the generous people around the world for their kindness and love. May god bless all of them. We are still in a state of disbelief, a bit overwhelmed with everything. But Jose and Joel continue to help us."