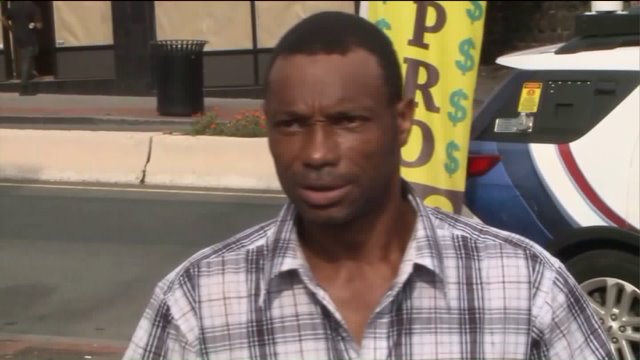 ELIZABETH, N.J. — Ivan White knew that his friend Lee Parker needed a backpack. So when the 56-year-old retiree saw one perched on a metal trashcan on the corner of North and East Broad Street in Elizabeth, New Jersey, he suggested they grab it.

"Wow. Providence of the Lord, I said to myself," noted White, an Elizabeth resident, who had just inadvertently stumbled upon the fourth set of explosives uncovered over the weekend between New York and New Jersey.

But his friend Parker, 50, who is homeless and has been living in his car, was equally unaware of the magnitude of their find, focusing instead on a job interview he had lined up for the following day.

The prospect of a free bag, it seemed, was a good sign.

"I figured I could use it for work, and put my lunch in there," he said, after grabbing the new pack and carrying it roughly a block away before the weight of the item forced him to place it on the ground.

Upon opening the new bag, both men said they saw a series of wires and metal pipes, which White says he instantly recognized as an explosive device, having previously served in the U.S. Navy.

At that point, White pulled out his cell phone and called the local Elizabeth police department.

He said "they looked at (the device) and jumped back, and then got out the yellow tape out."

Recalling the moment, White tipped his pair of brown, tinted glasses to one side, and paused.

In fact, the mens' find led to the discovery of five explosive devices tucked inside the bag, eventually drawing federal investigators to the scene, as well as a bomb squad that later inadvertently detonated one of the explosives.

No injuries were reported, though the blast destroyed the bomb squad's robot.

The initial find occurred Sunday evening, shortly after explosive devices either exploded or were uncovered in the Chelsea neighborhood of Manhattan and Seaside Park, New Jersey, prompting authorities to hunt for and eventually arrest Ahmad Khan Rahami, a 28-year-old naturalized citizen of Afghan descent and resident of Elizabeth.

Since then, both White and Parker have been hailed as heroes by local residents for their efforts in thwarting the attack.

In fact, an Elizabeth homeless charity, "At Heart's Length," created a GoFundMe page for those wanting to give back and donate to help Parker get back on his feet.

The goal is $10,000, according to the site; one third of which is intended for broader homeless initiatives in the New Jersey city. The rest is expected to be delivered to the two men.

"I'm just thankful," said Parker of the support. It helps with "the necessities."