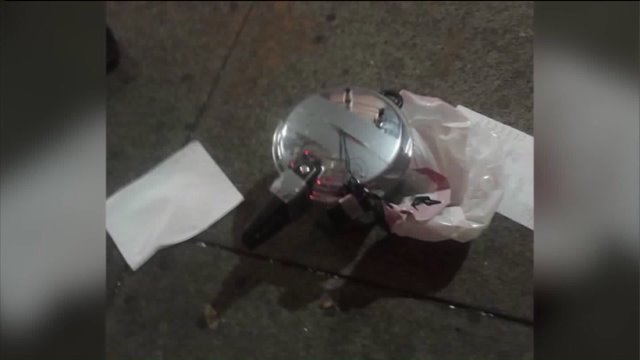 NEW YORK — Law enforcement officials have obtained surveillance videos that show a man near the site of a Saturday evening explosion in New York and the location where a pressure cooker bomb was found four blocks away, multiple local and federal law enforcement sources said.

The video shows a man dragging what has been described as a duffel bag with wheels on 23rd Street around 7:50 p.m., about 40 minutes before the explosion, according to the sources.

The video shows the man near the area where the explosion happened, according to a senior law enforcement official.

Authorities are looking for more video to build a timeline of his movements Saturday evening. Surveillance shows the same man on 27th Street about 10 minutes later with the same duffel bag, leaving it where police found an unexploded pressure cooker, multiple law enforcement sources said.

After the man leaves, the video shows two men removing from the duffel bag a white garbage bag believed to contain the pressure cooker, according to a senior law enforcement official and another source familiar with the video.

The men then walked away with the duffel bag the sources said.

Investigators have not determined if those two men are connected to the man dragging the duffel bag on both streets, the sources said.