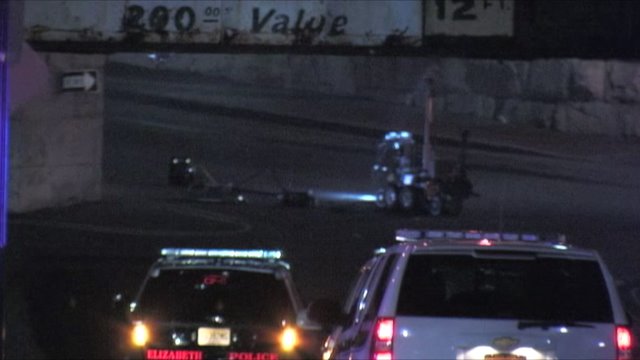 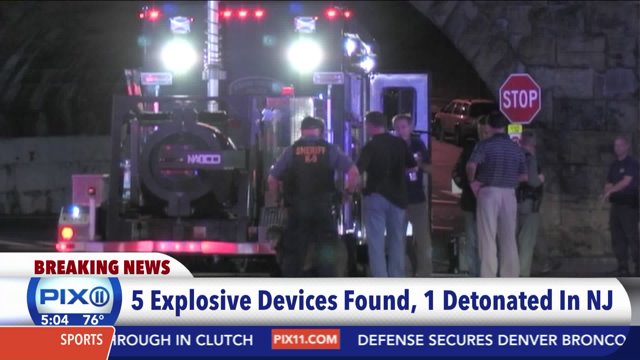 ELIZABETH, N.J. — One of five devices found in a suspicious package blew up near an Elizabeth train station early Monday when a police robot tried to disarm it, officials said.

The package was detonated by law enforcement authorities and the FBI is on the scene, Elizabeth Mayor Chris Bollwage said. No one was injured during the explosion.

Up to five devices were found in a backpack in a waste basket in Elizabeth, Bollwage said.

The FBI rendered the area as "safe" as of early Monday morning and are continuing to process evidence.

It is not known if the Elizabeth incident is connected with a bombing in Chelsea Saturday that left 29 people injured or an explosion in Seaside Park, N.J. earlier that same day, FBI officials said.

In both those incidents, cellphones were involved in the timing and detonation of the device although it remains unclear if the two explosions are linked, CNN reports.

No cellphones or electronic timing devices were found on or near the Elizabeth devices, according to the mayor.

Two men called police and reported seeing wires and a pipe coming out of the package after finding it in a train trestle at about 9:30 p.m. Sunday, Bollwage said.

New Jersey Transit service on the Northeast Corridor has been restored on modified Monday schedule, setting up for a troublesome rush-hour commute. Earlier, travelers were stuck on Amtrak trains for hours.

April Cattell was traveling home to Poughkeepsie from Pennsylvania when she and about 200 other passengers were stranded on a train for more than four hours.

"I've been sitting here on this train now for four hours now," Cattell wrote on her Instagram page. "But you know what we're good."

Cattell told PIX11 she had been checking up with the news and making train buddies to pass the time. She said buses picked them up and dropped passengers off at New Jersey Penn Station.

The suspicious package comes one day after an explosion went off in a busy Chelsea neighborhood Saturday night and hurt 29 people. None of the injuries were life-threatening.

Authorities have called the bombing an act of terrorism but with no international ties.