People questioned in connection with Chelsea explosion; no arrests made: FBI 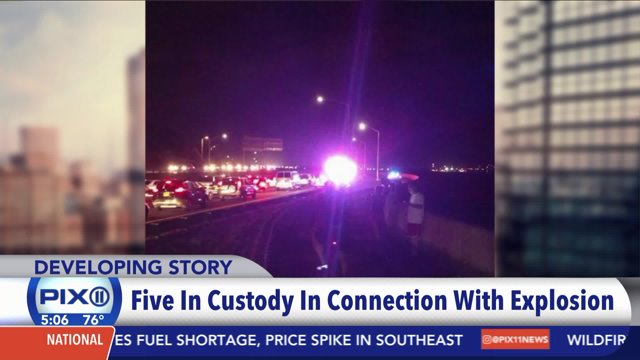 NEW YORK – Federal agents pulled over a vehicle of interest on the Belt Parkway and questioned its occupants about the explosion in Chelsea before later releasing them, the FBI said Monday.

Five people were taken in for questioning at the FBI's New York Office after a traffic stop on Belt Parkway underneath the Verrazano-Narrows Bridge, police sources said.

State Senator Marty Golden, who represents parts of southern Brooklyn, confirmed on his Instagram account there's a possible connection to the Chelsea explosion.

Late Sunday night, a suspicious package was  discovered at a train station in Elizabeth, New Jersey. The FBI has not whether there was link between the Chelsea blast on the devices found.

Twenty-nine people were hospitalized overnight and released by Sunday afternoon due to an explosion around 8:30 p.m. Saturday in front of 135 W. 23rd St. between Sixth and Seventh avenues.  None of those hospitalized sustained serious injuries, and the worst was described by FDNY as a puncture wound.

Components "indicative of an improvised explosive device (IED)" were discovered at the Chelsea blast site, leading Police Commissioner James O'Neill to say "we definitely had a bombing."

The explosion caused "significant damage" to buildings, making it all the more remarkable that nobody was killed, Cuomo said.

The bombing was one of four eerily similar incidents to hit the tri-state area on Saturday. The first being a pipe-bomb explosion in the morning hours in Seaside Park, N.J. that resulted in no injuries, and later the discovery of two suspicious devices in Manhattan following the Chelsea explosion.