Suspect in Philadelphia shooting rampage that killed 1, injured 5 was ‘well-known’ to police 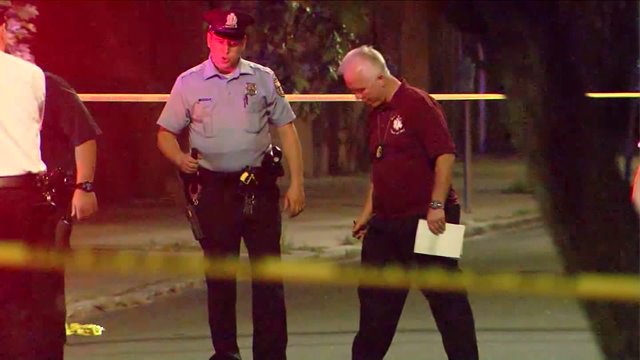 PHILADELPHIA — A gunman with a reported hatred of law enforcement went on a deadly tear late Friday in Philadelphia, ambushing a police sergeant and firing rounds into a tavern and a car before police shot him dead, authorities said.

The rampage left a 25-year-old woman dead after she was shot seven times in the torso, police said. Two police officers and three others — two men and a woman — also were wounded.

"Right now we have a lot of questions. This is completely a bizarre situation," Philadelphia police Commissioner Richard Ross Jr. said at a press conference Saturday.

Glenn was well-known to the police department.

"Obviously we are trying to track that individual down to make sure they are OK first and foremost," he said.

The shooting occurred at about 11:20 p.m. Friday when Glenn approached a police car and fired through the window at Sgt. Sylvia Young, who was sitting in her cruiser at 52nd and Sansom streets in west Philadelphia, police said.

No words were exchanged, according to Ross.

Young, a 19-year veteran of the force, was struck in her left arm and her protective vest. She is in stable condition at a hospital, police said. Ross said she is talking and is going to be OK.

Officers nearby heard the gunfire and responded, chasing down the man as he fled.

Cornered in an alley

The gunman fired into a bar, which had its door open, injuring a security guard, police said. He then grabbed a woman and used her as a human shield, shooting her in the leg, authorities said.

He discharged further rounds into a car, striking a man and woman inside, police said.

Glen ran into an alley before a University of Pennsylvania police officer and two others from the city police cornered him. Police said they shot and killed him, and he was declared dead at the scene.

The university police officer was shot in the pelvis and the right ankle, police said, and he is in stable condition at a hospital.

Four officers were believed to have discharged their weapons, police said.

CNN affiliate WPVI reported that "officers will be riding two to a car until further notice."

Another ambush in January

In January, a gunman in west Philadelphia shot and wounded an officer sitting in his police car. That shooting was not far from where Friday night's rampage began.

The shooter then allegedly told police after he ambushed Officer Jesse Hartnett that he had pledged allegiance to ISIS, police said.

But "we have no reason at this point to believe" Friday's shooting "is related to any beliefs of a religious nature or anything like that, just feelings about police departments and police officers in general and probation officers," said Ross, the police commissioner.