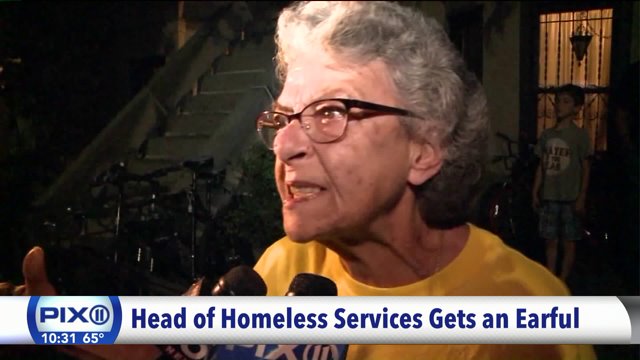 MASPETH, Queens – From the last year, PIX11 has closely examined the homeless crisis from all angles, including bold protests from working class residents in Maspeth, over New York City Homeless Commissioner Steven Banks' proposed conversion of a Holiday Inn Express Hotel into a homeless shelter.

"They don't want to talk to us, so we have to do this to protect our neighborhood, and our children," one protester said.

A woman, one of Banks' neighbors is furious.

The decision to protest here was as bold as it was symbolic.

New York City's shelter population is at another all-time high: 59, 548.

The take away from the statistic is the homeless crisis just keeps getting worse and Commissioner Banks, who for the last month has either dodged or denied every one of interview requests has gone silent.

In PIX11's previous reports, Maspeth residents have fiercely denied this is just another "Not in My Own Backyard" movement.

When news broke of the Maspeth residents aggressive plan to engage Commissioner Banks on his turf.

"The city will continue to engage with community members regarding this proposal, but New York City will not stand for the harassment of a government official and his family at their home."

But listen to what the Mayor had to say about a citizen's right to protest back in April 2015.

"We have a deep, deep respect for the right to peacefully protest."

And as the city continues to try to force the Maspeth Holiday Inn conversion into a homeless shelter, PIX11 uncovered an increased reliance by the city to house the homeless in corporate hotels, citing data pulled directly from the recently released Mayor's Office of Operations shelter report.

Banks — under his watch — has 68 hotels that the city is relying on to house the homeless.