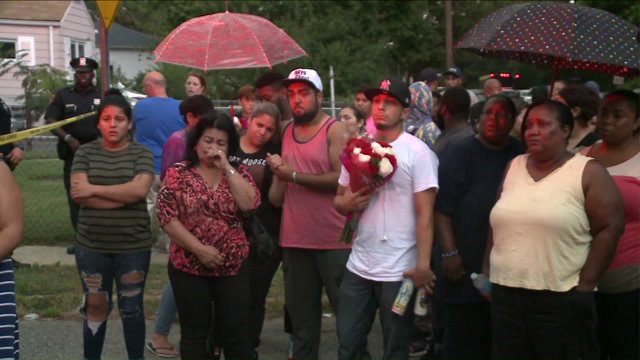 BRENTWOOD, N.Y.  – School officials have added extra security at Brentwood High School Thursday after a teenage student was beaten to death and a body matching the description of her friend was also discovered.

There is additional security at Brentwood High School on September 15, 2016 after a teen girl was found dead and a body of a young girl also discovered. (Photo: Anthony DiLorenzo/PIX11)

Suffolk County police said Nisa Mickens, 15, was found dead Tuesday night outside the gate to Loretta Park Elementary School. Investigators say she had at least 10 significant injuries that led police to believe she had been beaten to death and struck by a vehicle.

Mickens and her friend 16-year-old Kayla Cuevas were walking in the area when Mickens' family say they believe gang members tried to kidnap Cuevas. Mickens tried to fight off the kidnappers, but was killed, her body left alongside the road one day before her 16th birthday.

Another body was found behind a home Wednesday afternoon on Ray Court, a few dozen yards where Mickens' body was discovered. Investigators say it matches the description of Cuevas.

A community is now gripped with grief and fear and investigators vowing to find the teens' killer or killers.

Dr. Levi McIntyre, superintendent of the school, in a letter to parents and students  wrote about Mickens' death and another possible loss in Cuevas Wednesday.

"The safety and welfare of students and staff are, and always will be, our paramount concerns," McIntyre said. "The next few weeks will be a difficult time for all of us. Although individual response to this news maybe different please know that the District stands unified in its efforts to provide a nurturing and safe environment for all our students."

McIntyre said grief counselors are available to provide support to students and staff in wake of the tragedy.

Kayla Cuevas believed to be dead, and the body of her friend, Nisa Mickens, was found in Brentwood on Sept. 14, 2016. (Facebook)