‘B*tch don’t even know me!’ 86-year-old woman in wheelchair has harsh words for purse thief 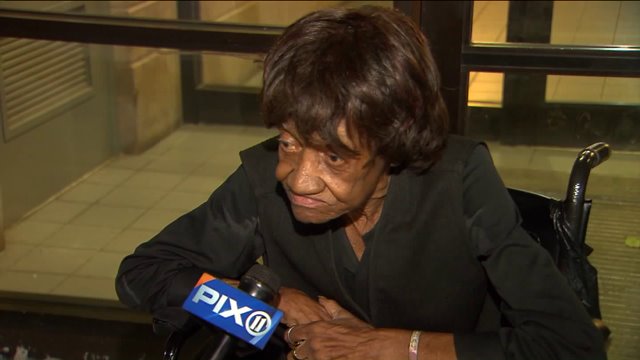 TREMONT, Bronx — The 86-year-old woman who was robbed outside her Bronx apartment wants to let her purse snatcher know she messed with the wrong woman.

"She wants to hurt me, and the b*tch don't even know me!" Bernice Starnes told PIX11 News.

Starnes was sitting in a wheelchair outside her apartment on Marmion Avenue in Tremont Sunday afternoon when a woman swiped her pocketbook — and it was all caught on surveillance video. Starnes, who uses a wheelchair, was unable to run after her.

"I couldn't catch her," Starnes said. "I wanted to catch her and beat the sh*t out of her."

The thief, after she got the money and a bank card, tossed the pocketbook out like a piece of trash, also seen on the surveillance video.

The suspected thief, identified as Adrianne Terry, 37, of the Bronx, was arrested Tuesday and charged with grand larceny and petit larceny.

But Starnes, who's full of spunk, doesn't want the purse snatcher to get off that easy. She may be 86, but it doesn't mean people can take advantage of her.

"I hope that they beat her ass. Some of the women in prison beat her ass everyday for as long as she's in there," Starnes said.

When asked if what she was hoping for was a little harsh, she yelled, "So what!"

"What she did to me was even worse," Starnes said. "I'm supposed to feel sorry for that b*tch. I don't!"

Now, with the accused thief in jail, Starnes hope "she stays there for the rest of her freakin' life!"

But Terry is maintaining her innocence and said "it wasn't me" when PIX11 News asked if she had any words on the accusations against her.

Starnes isn't buying it at all and she's not done speaking her mind. She said she is planning to be at Terry's arraignment.

For now, Starnes said she wants to go on a nice cruise, a relaxing vacation to get past the terrifying incident. On Monday, officers also pooled their own money together and donated it to Starnes, who was reduced to tears when she received it.