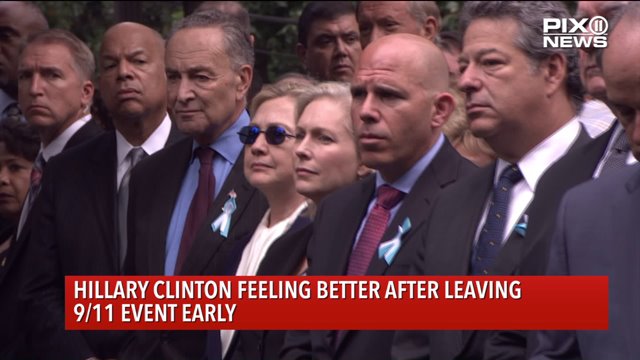 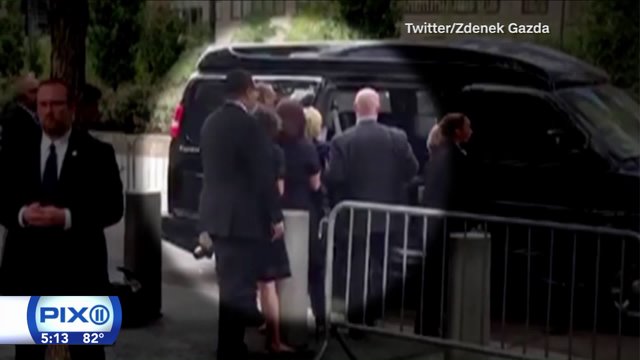 "Secretary Clinton has been experiencing a cough related to allergies. On Friday, during follow up evaluation of her prolonged cough, she was diagnosed with pneumonia," said Dr. Lisa R. Bardack, Clinton's doctor. "She was put on antibiotics, and advised to rest and modify her schedule. While at this morning's event, she became overheated and dehydrated. I have just examined her and she is now re-hydrated and recovering nicely."

She'd attended the event at the World Trade Center for 90 minutes "to pay her respects and greet some of the families of the fallen," Clinton spokesman Nick Merrill said.

"During the ceremony, she felt overheated so departed to go to her daughter's apartment, and is feeling much better," Merill said.

Video posted on Twitter shows Clinton held by staff, slumping and being helped into a van.

She left the ceremony about 9:30 a.m., when the temperature at the World Trade Center site was about 79 degrees.

Clinton left her daughter's apartment about 11:45 a.m., smiling and waving to reporters gathered outside.

"It's a beautiful day," she told the crowd.

A source close to the incident told PIX11 News Clinton's rival Donald Trump was present and among the first to be told about what had happened.