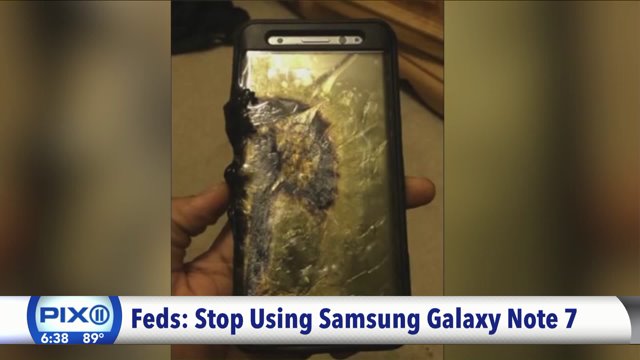 NEW YORK -- The U.S Consumer Product Safety Commission is urging owners of the Samsung Galaxy Note7 — which Samsung recalled last week — to turn them off and leave them off due to a fire hazard.

This consumer warning is based on recent reports involving lithium-ion batteries in certain Note7 devices that have resulted in fires. These incidents have occurred while charging and during normal use.

Samsung Electronics America, Inc. said Friday that they are collaborating with CPSC to work with the CPSC on a voluntary corrective action plan to expedite a US recall of the product.

“Samsung continues to ensure that consumer safety remains our top priority. We are asking users to power down their Galaxy Note7s and exchange them now.” says Tim Baxter, president of Samsung Electronics America. “New Note7 replacement devices will be issued to exchange program participants upon completion of the CPSC process. In the interim, consumers can return their Note7 for another device.”

Although there have been only a small number of reported incidents, Samsung is taking great care to provide customers with the support they need. Samsung has identified the affected inventory and stopped sales and shipments of those devices.

Customers who have Galaxy Note7 devices can replace their current device with a new device under the terms of the US Note7 Exchange Program.

The US Note7 Exchange Program offers consumers the following choices:

2. Exchange current Galaxy Note7 for a Galaxy S7 or Galaxy S7 edge and replacement of any Note7 specific accessories with a refund of the price difference between devices.

Select carrier and retail outlets will also provide customers, who prefer a replacement Note7, with a Samsung loaner phone to use until new Note7s are available.

Additionally, participants in the US exchange program will receive a $25 gift card or bill credit from select carrier or retail outlets.

“Our collaboration with the CPSC, carrier partners, and via our own communication channels is aimed at ensuring all Note7 users are aware of the issue and understand their options,” adds Baxter.

The terms of the CPSC approved recall will be announced as they are available.

Galaxy Note7 owners can contact or visit the retail outlet where they purchased their device or call 1-800-SAMSUNG to initiate a product exchange and to resolve any other questions or concerns.

The Federal Aviation Administration says that because of concern about fires involving the smartphone, it "strongly advises" airline passengers not to use or charge one or stow one in checked baggage.

The three biggest U.S. airlines — American, Delta and United — said Friday that they were studying the FAA warning, but it was unclear how they would make sure that passengers keep the Samsung devices powered off.

A spokesman for the Transportation Security Administration declined to say whether screeners would look for the devices either in carry-on or checked bags.

"Unless it is a strictly prohibited item, there's not much that the TSA can do," said Todd Curtis, director of an air-safety foundation. He said the airlines could act on their own to bar the phones, as they did last year with hoverboards.

Singapore Airlines said that it prohibited the use or charging of the Galaxy device during flights.

Delta Air Lines and others posted links on their websites to the FAA warning. United, Alaska Airlines and others said that during pre-takeoff safety demonstrations, flight attendants would ask passengers not to use the Galaxy.

Spirit Airlines said it would send customers an email 12 hours before their flight to tell them about the FAA warning.

Virgin America, U.K.-based Virgin Atlantic and Australian carrier Qantas said they were telling passengers not to check the Galaxy phone and to leave it switched off during flights.

Safety experts have been concerned for several years about the fire risk when lithium-ion batteries are used or even carried on flights.

In February, a UN aviation panel recommended that nations adopt a temporary ban on cargo shipments of rechargeable lithium batteries on passenger airlines, although the policy wouldn't apply to batteries inside devices like phones, laptops or tablets.