Parents who lost both sons on 9/11 worried about, and proud of, grandson joining NYPD 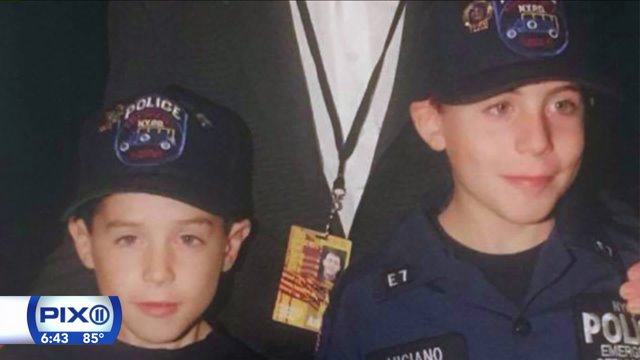 When the Twin Towers were attacked by terrorists flying jets, causing their collapse, the couple’s two sons were among the missing in the massive pile of burning steel and concrete.

The body of 34-year-old Joseph, a decorated NYPD Emergency Services detective, was ultimately found. The body of their oldest son, John — a 36-year-old Brooklyn firefighter — was never recovered.

“There’s no such thing as healing,” Jan Vigiano told PIX11 as another, 9/11 anniversary neared, clutching her husband’s hand in their living room. “You learn to live with it. You learn to live around it.”

Jan and John, a retired FDNY Captain and former Marine, have met some remarkable people during their 15-year odyssey since September 11, 2001. Actor Gary Sinise, a fundraiser for wounded soldiers, is a close friend.

But it’s their five grandchildren who have truly given them the will to go on.

“They’re all beautiful, they’re all good, and they make us proud,” John Vigiano said. “That’s what keeps us going; seeing them succeed.”

Their oldest grandson, Joseph Vigiano Jr. is now a recruit in the NYPD Police Academy, following a path forged by his late dad and his mother, Kathy, who met as young officers in Brooklyn’s 75th Precinct.

Joseph’s mom—now retired from the NYPD—wasn’t so enthusiastic, at first.

But Joe Jr. took the NYPD test with a friend and passed.

“He said, ‘Ma, I did college for you. This is for me,” Kathy Vigiano recalled.

Joe Jr. graduated from SUNY Maritime last year and, by the fall, he was in boot camp with the United States Marines on Parris Island.

The grandfather decided to have a brief conversation with the Marine drill instructor.

Vigiano explained to the Marine that his grandson had a chance to get a job with a big shipping company, but that Joseph decided he wanted the military background.

“I said ‘I just want you to know the young man you’re putting on the parade deck tomorrow.”

Kathy Vigiano had three sons with Joe, and the middle boy—Jimmy—is also talking about joining the NYPD and the U.S. Marines.

He turned 15 this past June.

“I tell time by John,” Kathy Vigiano said, tying John’s years to the time that’s elapsed since the family’s loss.
John Vigiano, a high school sophomore, plays lacrosse, like his dad did, and he cherishes a framed picture of him, as an infant, sleeping on his father’s chest.

When PIX11 asked John what his mother and grandparents told him about his dad, he smiled and said, “He was funny.”

Both Kathy Vigiano and her father-in-law worry about the current tensions between many communities and members of law enforcement.

“I’m actually more fearful of him being a cop than being a Marine,” John Vigiano, Sr. said. “The climate in this country, in the last few years, has been anti-police.”

Joseph Junior has talked of possibly working in the precinct where his parents met, as young rookies: the 75 in Brooklyn. It was riddled with crack cocaine shootings in the 1980s, but Kathy Vigiano had good memories of her time in East New York.

“I’m not too worried, because I had the community helping me out when I was a police officer there,” Kathy Vigiano said. “Overall, the community is great.”

In 2004, John Vigiano tapped his brothers in the FDNY community to start the Vigiano Group, which visits wounded veterans at Walter Reed Army Medical Center. He had visited Iraq in 2003.

Now, as the family gets ready for this year’s 9/11 anniversary, Vigiano—who has battled cancer before and after the terror attacks—offered us his perspective on surviving the unimaginable.

And when the going gets tough for Jan, who said she sometimes smells smoke and feels the presence of her son, John, the firefighter—her husband takes her to the ocean to give her a sense of peace.