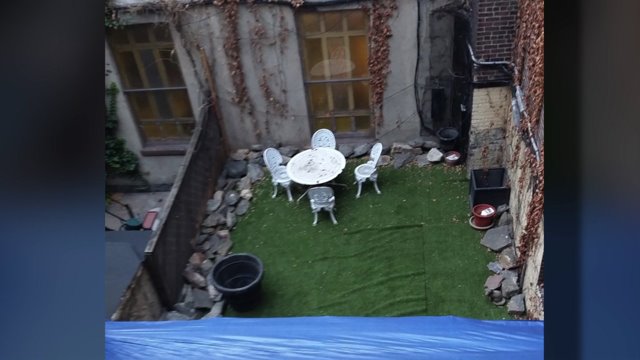 WEST VILLAGE, Manhattan -- In a city of old buildings, apartment owners are always looking for ways to renovate and expand their living space.

In the West Village, many of the buildings are land marked, meaning special permits are needed to do any kind of work on a home.

Yet, at 35 Perry Street, that just did not seem to be the case.

The owner purchased the 3-story townhouse, which was built in 1852 and decided to spruce the place up.

Except, the owner did not get any of the proper permits to do any kind of work.

For weeks, neighbors kept hearing digging and banging coming from underground but could not figure out what was going on. Workers could be seen carrying debris into trucks outside, which would then haul the debris away. Those neighbors filed a number of complaints to the Department of Buildings, which sent people out to investigate.

They discovered quite the operation.

Hidden underneath a fake backyard, disguised by AstroTurf, a table and chairs, was an excavation site. Those workers were digging seven feet into the ground.

The Department of Buildings immediately issued a stop work order on the site and told the owner to hire a structural engineer to fix the integrity of the building.

"Anytime someone is renovating, they go overboard," says Flynn.

Flynn says the disguised backyard was meant to appeal to neighbors, who wouldn't want to see an ugly construction site.

The Department of Buildings released a statement saying,

“This case shows the depths to which bad actors will sink, or in this case dig, to evade the law. This illegal excavation greatly endangered the lives of workers and the public, and could have triggered a deadly collapse bringing neighboring properties down with it.”