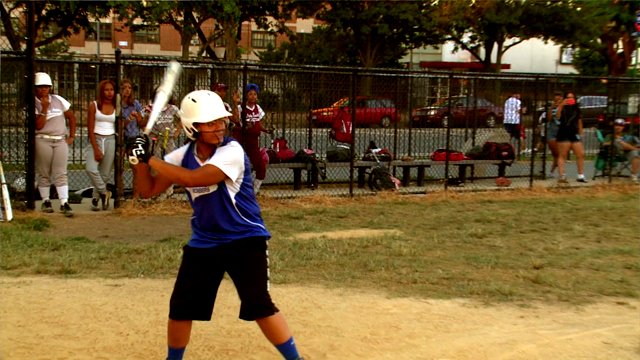 Softball is in full swing in the Bronx. We bring you to a field in Throgs Neck to show you how a new athletic league is taking on the culture of bullying, one pitch at a time.

They play for a purpose--- to bat away their bullies.

"It’s a place where we made girls be safe,” Gabrielle Igartua smiled. "I’m proud to be a Bomber.”

It's softball with a simple mission: support, motivate and accept.

“To not put others down, to build yourself up and to help other build themselves up as well” Gabrielle said.

"My daughter was in a previous league and she was getting bullied and it was very uncomfortable for her,” Jennifer Igartua.

“They were like she can’t catch a ball, she should be benched, look at the way she throws, she can’t bat,” Gabrielle remembered. “My self-esteem went down greatly and I just gave up on myself basically.”

So, Juan and Jennifer decided to make a change, giving Gabrielle a new chance to participate.

“We decided to remove her from the league and start something on our own,” Jennifer said.

It didn't take long for the community to catch on. The number of players has already more than doubled from 45 to 115.

“Everybody would make fun of the way I looked and it would bother me so the league was a way that I would make friends, have fun and be myself,” Glorian Carrion, one of the players, described.

There are no tryouts. The only requirement is to write a letter describing their connection to bullying.

“The girls sometimes are afraid to talk to a parent so sometimes it’s easier for them physically write a letter,” Juan Villoch explained. "I’m looking to find a bullying organization that I could provide the letters and maybe get counseling for the girls.”

Th girls, ages 12-17, describe this league as a family. In a sense, this field has become their home base.

“Coming to a league where there’s like different races, different sizes and different amount of girls, I didn’t have to feel different," Shailyn Reyes, one of the players, said.

So with every throw, catch and hit, they're laying new groundwork for the game, and hopefully, more importantly, for the next generation.

The league said it's in need of more coaches to accommodate all the girls who want to play.

And in the future, they hope to expand into other parts of the Bronx and Manhattan.