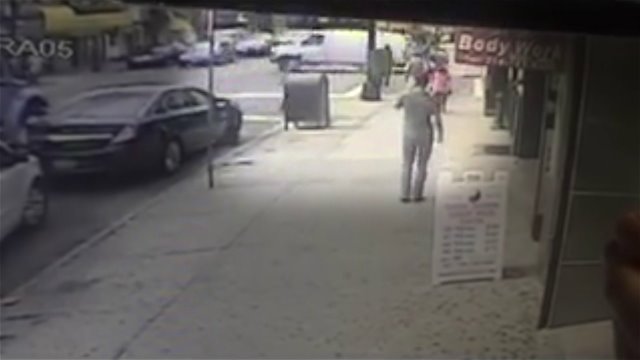 ASTORIA, Queens — An 80-year-old woman is dead and two others are hurt after a van backed up into a food cart in Astoria Wednesday afternoon.

Firefighters were called about 2:30 p.m. to 32-01 32nd St., where the popular food cart was pinned to the wall of Capitol One Bank.

Two people, an 80-year-old woman and a 71-year-old man, were rushed to a hospital in critical condition. A third person was taken to another hospital with minor injuries.

The 80-year-old woman was pronounced dead at the hospital, police said. Her identity is being withheld until her family is notified.

The 71-year-old man remains at the hospital, according to police.

Give Me Astoria reports one of the victims worked at the food cart. The Souvlaki cart has been a popular place to grab a bite in Astoria for more than a decade.

What caused the van to back up into the cart was not immediately known.