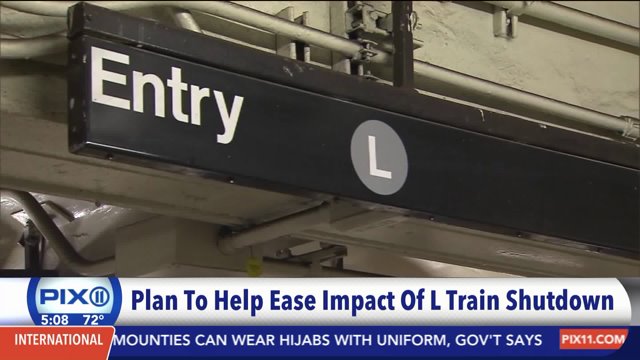 WILLIAMSBURG, Brooklyn – A commuting nightmare for L train riders is a few years away but anxiety is already growing.

Hundreds of thousands of people rely on the L train daily. It is a vital connection between Manhattan and Brooklyn and when the MTA announced it would shut the line entirely in Manhattan and partially in Brooklyn for 19 months of repairs -- people started to panic. A new study from New York University takes a look at this 2019 planned construction.

It needed to make repairs on damage from Superstorm Sandy. And while commuters and businesses -- especially  on the Brooklyn side are thing about how New Yorkers will be able to cross the river -- NYU's Rudin Center for Transportation examines this as well.

Recommendations to the MTA include increasing subway service on connection and nearby subway lines. High speed bus service including a rush hour bus lane on the Williamsburg Bridge. More bike and car shares near the bridge and a public-private partnership with ridesharing companies like Uber and Lyft. Other options include increased East River Ferry service and new modes of transportation like a gondola over the East River and a scooter share.

L train ridership has skyrocketed over the past few years as new apartments, restaurants and nightlife has been developed in Brooklyn. An MTA spokesperson told the Wall Street Journal this week it's committed to a partnership and community engagement as it develops plans to minimize the impact.