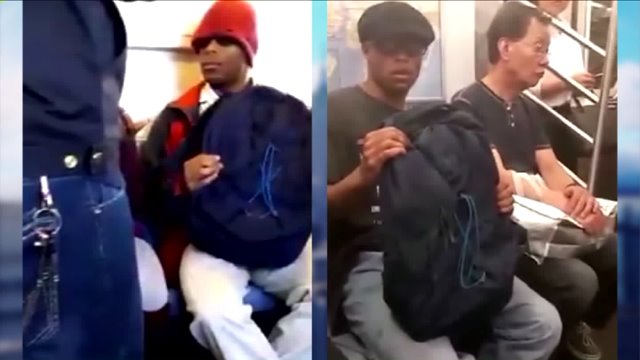 Law enforcement sources identified the man as Kevin Cuffe, 23, of the Bronx.

Cuffe faces a charge of public lewdness in the Aug. 15 incident. That day, fellow subway rider Deanna Carter shamed him off a crowded northbound No. 2 train.

Carter said she witnessed Cuffe gazing at female riders on the train while holding a bag over his lap and keeping one hand in his pants with a visible erection.

“He’s actually touching himself and I’m saying is he really doing this right now?” she recalled to PIX11 News. “There’s a train full of people and there’s children on the train.”

Carter posted video of the encounter on Facebook and it quickly amassed millions of views. As of midday Wednesday, that footage had been watched more than 3 million times.

According to police, Cuffe also was charged in an alleged incident that happened on Dec. 16, 2015, in which he’s accused of engaging in the same act.

In that case, PIX11 viewer Nicole De’Chabert captured Cuffe on cellphone video allegedly fondling himself aboard a Manhattan-bound No. 2 train.

De’Chabert never reported the incident to police but instead posted the video on Facebook to warn her female friends.

But after watching PIX11’s report in which Carter recounted her subway encounter, De’Chabert recognized the subject of the latest video.

“When I looked very closely I said, that’s the same guy I’ve seen many months ago over the holiday season,” she told PIX11 News in an exclusive interview Aug. 17.

NYPD investigated both incidents, which led to Cuffe’s arrest a day later.

The suspect, who has a criminal record, is being charged with two counts of public lewdness. He’s scheduled to appear in court next month.