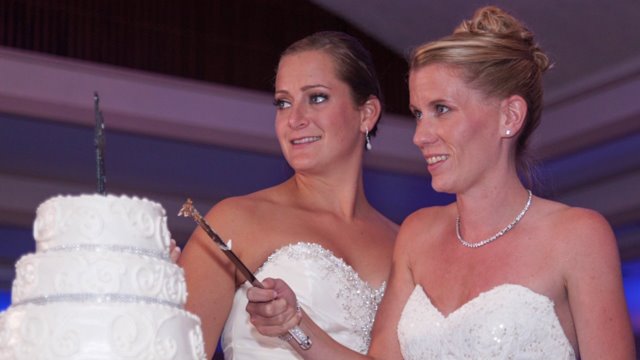 PARAMUS, N.J. — Kate Drumgoole, 33, thought she would never be fired from her job as a basketball coach and guidance counselor at Paramus Catholic High School in New Jersey. But that is exactly what happened after photos were posted to the school’s Facebook page of her wedding day.

“This is not something Jackie and I ever wanted. It’s not something we ever envisioned ourselves, having to take this journey, but more one we felt we needed to take. Because of the actions of the Archdiocese.”

The couple is suing the Archdiocese of Newark, school administrators and Jackie’s sister, who allegedly posted the photos after an argument.

At the time, the couple were still newlyweds and had just purchased their first home. Kate says she was called in for a meeting with school administrators on January 8th.

"I was told they had become aware I was in a same-sex marriage and that it was against the Catholic tenants and I had until January 15, which was that Friday, to resign or I would be terminated."

Their attorneys, Lawrence Kleiner and Eric Kleiner, say they intend to depose numerous faculty members and administrators at Paramus Catholic, and likely even depose the Archbishop.

"In 2016, discrimination – public or private – is unacceptable. My clients have a constitutional right to get married. They did nothing wrong. They followed their hearts and they followed the law. And for her to be fired because she got married is outrageous,” said Lawrence Kleiner.

In June, Pope Francis made remarks about homosexuality that many saw as a breakthrough.

“I repeat what the Catechism of the Catholic Church says: that they must not be discriminated against, that they must be respected and accompanied pastorally,” he said.

While Kate Drumgoole will likely never have her job back, her attorneys are seeking monetary damages. Most of all, she is hoping that this case will send a strong message.

“This is just so wrong. And that for an organization who preaches love, this is not love. This is not acceptance. This goes against everything that they claim to preach. And no one deserves to be treated the way that myself and Jackie have been treated.”