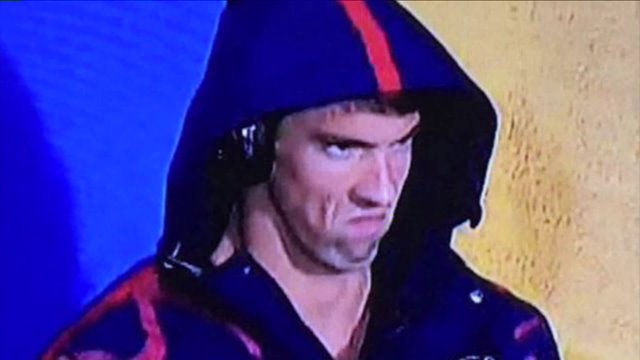 He was seemingly staring down competitor Chad le Clos of South Africa as he danced while warming up in front of Phelps in the ready room.

Phelps told NBC after the event that he had been thinking about "nothing" while le Clos was dancing in front of him, as the New York Times reported .

"He does his thing, I do mine," Phelps told NBC about le Clos' warmup routine.

When you ask mom for Cinnamon Toast Crunch and she gets the store brand version called "Cinnamon Squares" pic.twitter.com/rYfr5qE5PR

When someone uses "your" when it's supposed to be "you're" #PhelpsFace pic.twitter.com/ytedwDkrlV

When you pour a bowl of cereal and realize there's no milk #PhelpsFace pic.twitter.com/iZ7gRFJ0fF

Gymnast McKayla Maroney inspired an internet meme after winning a silver medal at the 2012 London games. The "McKayla Maroney Is Not Impressed" meme became its own viral sensation four years ago. Now, the internet has passed the Olympic meme torch to Phelps.